The upcoming talks in Cairo between Hamas and Fatah will be crucial to Palestinian unity and the direction it’s going to take. 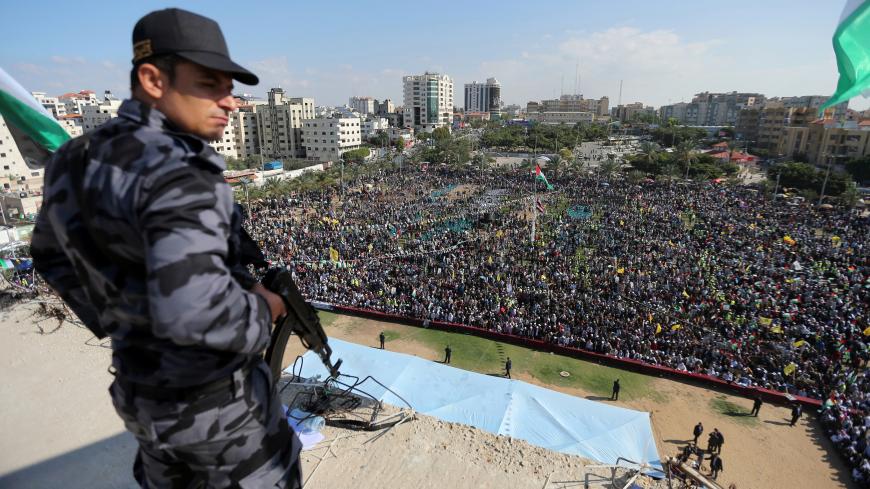 Egypt has summoned the representatives of the two major Palestinian factions, Fatah and Hamas, to another round of reconciliation talks in Cairo on Nov. 21. The leader of Hamas in the Gaza Strip, Yahya Sinwar, will head the delegation from Gaza. Saleh al-Arouri, the deputy head of the Hamas political bureau, will arrive in Cairo from his current exile in Beirut. The Fatah delegation from the West Bank will consist of the representatives who signed the agreement in principle with Hamas in Cairo a month ago, led by the senior Fatah official and envoy of Palestinian President Mahmoud Abbas, Azzam al-Ahmed. Palestinian intelligence chief Majid Faraj will be joining the delegation this time.

As reported here on Oct. 6, Hamas-Fatah discussions now focus on an Egyptian proposal designed to bypass one of the thorniest disputes between the two organizations: control over the Palestinian security forces. Its thrust is the creation of a type of national security council in which Hamas and the Palestinian Authority (PA) will have equal representation, with oversight by Egyptian officials who will also cast the deciding vote in case of a tie.

A Palestinian security source in Ramallah told Al-Monitor that disarming Hamas and dismantling its armed wing, the Izz ad-Din al-Qassam Brigades, is no longer on the agenda. The source, who spoke on condition of anonymity, said the PA no longer insists even on rounding up the massive amounts of weapons held by the many militant groups active in the Gaza Strip. Abbas now realizes better than ever that the slogan he coined — “One law, one weapon, under one authority” — will not materialize overnight. Nonetheless, he hopes a system can be created to enable PA control over the military and civilian centers of power in Gaza. Although Hamas is unlikely to accede to such an arrangement, for now, both sides are playing make-believe for public consumption. The goal is to help Abbas get down from the high tree he climbed when he announced that he would not allow Hamas to set up in Gaza a Hezbollah-style model of the kind that undermines Lebanon’s government.

This is the crux of the matter: how to achieve Hamas-Fatah unity even as Iran’s interests and involvement in Beirut and Gaza grow daily. “These are going to be crucial talks,” the security source told Al-Monitor. They will be taking place while Saudi Arabia and Egypt are busy, mostly in Lebanon, coordinating their moves vis-a-vis Iran’s involvement in the region.

While on a visit to Cairo Nov. 6, Abbas was summoned unexpectedly to an urgent meeting with Saudi King Salman bin Abdul-Aziz Al Saud and Crown Prince Mohammed bin Salman. He immediately flew to Riyadh in the same dramatic week that Lebanese Prime Minister Saad Hariri resigned. Issuing a dramatic statement from his location in Saudi Arabia, Hariri described the situation in his country as an Iranian takeover through the Shiite Hezbollah organization. The Iran-Hezbollah-Hamas trio cooperate openly. None of the three sides bother to deny their links, and they even take pride in them. Arouri visited Iran at least three times in recent months. He boasts of the alliance that his organization now enjoys with Iran, which has promised to provide for all of its needs. Arouri’s ties with Hezbollah are not secret, either. On Oct. 31, he met in Beirut with Hezbollah Secretary-General Hassan Nasrallah for the first time since ties between the two groups were severed in 2011. The two television channels identified with Hezbollah, Al-Mayadeen and Al-Manar, reported after the meeting that Nasrallah and Arouri underscored their common interests and the solidarity between their two organizations in the face of what they termed “Zionist aggression.” The coordination between them will clearly not remain on a declaratory level. When the Hamas political bureau was headquartered in Damascus, Hamas and Hezbollah conducted full military cooperation, including joint exercises in Iran and Lebanon, adoption of an identical military doctrine and concerted efforts to smuggle weapons into Gaza.

Arouri is the main advocate in Hamas for accepting Tehran’s warm and assuring embrace and for expanding the relationship with Hezbollah. This is his ideological and operational model. The Saudis dislike the Hamas-Tehran relationship and are greatly concerned that Abbas is being drawn into this entanglement. That is why they summoned him with such urgency and presented him with red lines: yes to reconciliation with Hamas, and no to an Iranian and Hezbollah foothold in Gaza.

Abbas would not have been invited to the palace at the height of the crisis in Lebanon and the direct Saudi involvement in it were it not for the monarch’s fears over the repercussions of the emerging Hamas-Fatah reconciliation.

Between the lines of the warm and welcoming phrases in the announcement that followed the king’s meeting with Abbas is a barely veiled threat. Salman pledged full backing in all international forums for the PA’s efforts to establish an independent state with Jerusalem as its capital, as well as broad economic support, as long as the Palestinians pick the right side.

As aforementioned, on Nov. 21, the Hamas-Fatah delegations will descend on Cairo from Gaza, Ramallah and Beirut. Arouri realizes that when the talks turn to the issue of unified security control, the principle involved will be more than just “One law, one weapon, under one authority.” He will have to choose whether Hamas will ally itself with Iran or with Saudi Arabia and Egypt. The Palestinians will try to decide whether to form one body that adheres to the principles of resistance and jihad, as Hamas wishes, or an authority that operates through diplomatic channels to mobilize broad Arab support in international forums for the creation of a Palestinian state, as Fatah desires. Bridging this chasm will be a major engineering feat.