Iraq's parliament is considering an amendment that opponents say would severely violate the rights of women and children and send the country's legal system back to a "primitive era." 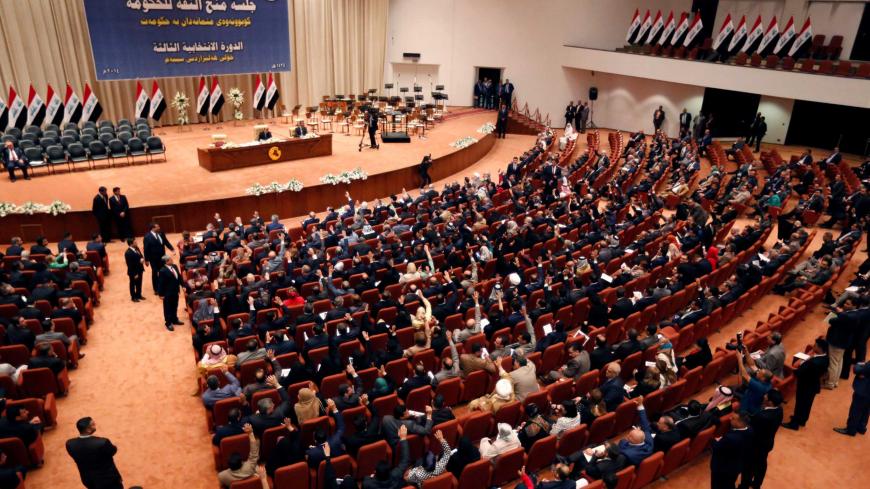 Members of the Iraqi parliament gather to vote on Iraq's new government at the parliament headquarters in Baghdad, Sept. 8, 2014. - REUTERS/Thaier Al-Sudani

BAGHDAD — Islamist parties in the Iraqi parliament are pushing an amendment to the personal status law that would allow men to marry girls as young as 9. Human rights activists decried the proposal, which would transfer civil matters to the jurisdiction of clerics.

National Iraqi Alliance parliament member Hamed al-Khodari submitted the amendment bill Nov. 2. A more extreme version of the proposal was withdrawn in 2014 because of public pressure, and public anger is even more intense this time. The United Nations Assistance Mission in Iraq (UNAMI) voiced its concerns and encouraged "widening the scope of consultations about the amendment … to ensure the respect and protection of women's rights."

During a Nov. 9 briefing, US State Department spokesperson Heather Nauert condemned the proposal.

"We are completely against and oppose the idea of children marrying adults," she said. "And let's remember, it was not that long ago that we called out the depravity of [the Islamic State] for taking child prisoners, child brides, and the sort. Some of this will be an internal Iraqi matter, but we remain firmly opposed to the idea that any adult would attempt to marry a child in that fashion."

The proposed amendment basically shakes the foundations of the old law. The bill indicates that when issuing decisions on personal status issues, the court should follow the rulings of religious scholars for Sunni or Shiite sects, depending on the husband's faith. The Scholars' Congregation at the Shiite Endowment Diwan undertakes answering the court's questions per the common Shiite jurisprudence. In its absence, the Supreme Religious Authority in Najaf is consulted. The Scholars' Fatwa Council commits to answering the court based on common Sunni jurisprudence.

Critics say the proposed amendment would breach the constitution's principles of separation of powers and judicial independence. The amendment would also contradict Article 14 of the constitution, which says all Iraqis are equal before the law, without any discrimination based on gender, race, ethnicity, nationality, origin, color, religion, sect, belief, opinion or economic or social status.

The proposed legislation also contradicts recommendations of a committee charged with ensuring the application of a UN international treaty known as the Convention on the Elimination of All Forms of Discrimination against Women, which was adopted in 1979. Finally, critics say the proposal would violate UN Security Council Resolution 1325 and the national plan to implement the resolution, which requires all discriminatory legislation against women to be amended.

However, Mohamad al-Massoudi, leader of the ruling National Iraqi Alliance party, is optimistic the bill will be approved. "Only some secular parties in the Iraqi parliament oppose the personal status amendment bill," he told Al-Monitor. "The bill will be passed this electoral session, or the next at most, because it is one of the laws whose legislation was stipulated by the constitution."

Pointing to inconsistencies in the constitution, he said, "No law can stop a Sharia principle, and the Iraqi Constitution forbade the legislation of any text that contradicts Islamic Sharia."

Despite the civil opposition and the UNAMI, which have called for further consultations, the Islamic current seems bent on moving forward with the amendment. It will try to implement Sharia as long as the Iraqi Constitution continues to allow for a new personal status law. The constitution, which has many contradictory articles, would have to be amended.

In other words, the amendment bill is the most recent step in an apparently endless battle between Islamizing the Iraqi state and secularizing it. For example, the Iraqi Governing Council issued a draft law in 2003 citing constitutional articles in an attempt to make Salafi regressive amendments. The 2003 decision stated the need to implement Islamic Sharia provisions in matters of marriage, engagement, marriage contracts, eligibility, proof of marriage and prohibitions and other areas.

Massoudi said the current proposal "has many benefits."

He said, "It gives women and families Islamic rights and grants each individual the freedom to choose the religious provisions in their sect. The bill also limits the number of marriages [that have been] happening outside courts for years." Regarding the marriage of minors, Massoudi said, "Some Muslim sects have allowed such marriages."

Zikra Sarsam, a civil activist and vice president of the nongovernmental organization Burj Babel for Media Development, said civil parties objecting to the amendment bill are banking on public pressure and the stance of the supreme Shiite authority, Grand Ayatollah Ali al-Sistani, who was against the proposal that was withdrawn in 2014. Sarsam told Al-Monitor, "During the next few days, massive protests will take to the streets to demand the withdrawal of the amendment bill from parliament. We will also try to show Sistani's stance on the matter."

Sarsam added, "The amendment bill aims at enslaving Iraqi women and taking the country back to a primitive era. It contains constitutional and legal violations, mainly discriminating against Iraqis based on sect or belief, establishing a religious state and fighting the civil current."

Opponents say Islamist parties will probably withdraw the personal status amendment bill, as they did before, due to public pressure and perhaps following a Sistani intervention. Still, the early electoral propaganda has earned these parties some gains, as they succeeded in addressing their public base before the elections set for spring. But unless the religious law is passed or the constitution is permanently amended, the battle will extend to the next electoral session.