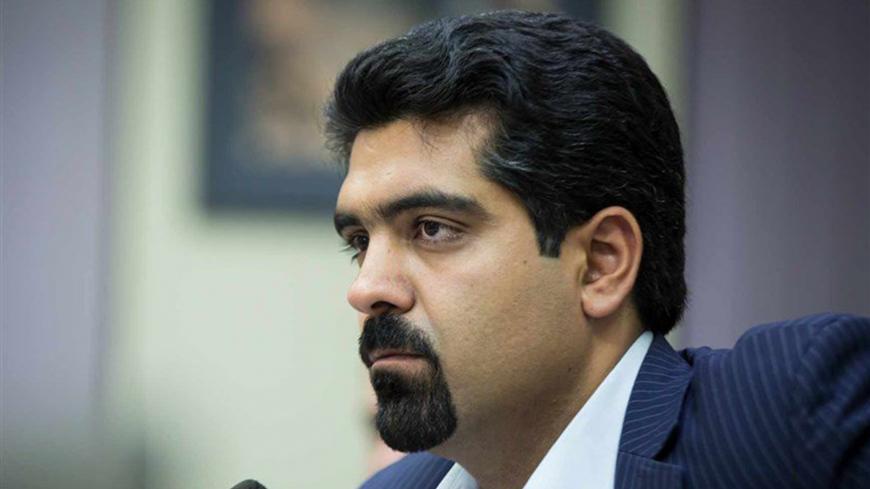 Sepanta Niknam, a Zoroastrian, who was elected as a city council member in the central Iranian town of Yazd. Posted Oct. 24, 2017. - Twitter/@RZimmt

The election of Sepanta Niknam, a Zoroastrian, as a city council member in the central Iranian town of Yazd has become the topic of hot debate on the country’s political stage. While the Guardian Council says religious minorities cannot be representatives of Muslim-majority constituencies, the administration of President Hassan Rouhani and the parliament think otherwise.

It should be noted that Niknam has already served one full term as city councilor in Yazd from 2013-2017. However, following his re-election in the May 19 municipal polls, a defeated conservative candidate filed a complaint on the grounds of Niknam's religion, arguing that it was against Iran's constitution for a member of a religious minority to make decisions on behalf of the whole population of a Muslim-majority city. The complaint prompted the Court of Administrative Justice to issue an order suspending Niknam’s membership to the city council, basing its decision on an earlier letter by Ayatollah Ahmad Jannati, the ultra-conservative head of the Guardian Council, which is the clerical body that vets candidates for elections.

So where did the story begin? On April 15, about one month before Iran’s local and presidential elections, Jannati issued a directive demanding that non-Muslims be disqualified from running in the then-upcoming city and village council elections in localities where most of the population are Muslims. His order was met with different reactions from Iran’s political groups, with many voicing opposition to such a measure.

However, since city council elections — contrary to presidential and parliamentary polls — are not supervised by the Guardian Council and a parliamentary delegation oversees the vetting of the candidates for these elections, Jannati’s directive was never implemented. Thus, many religious minorities participated in the May 19 municipal vote and won, including Niknam.

A few months later, on Oct. 9, Yazd City Council Chairman Gholamali Sefid said he had been ordered by the governor of Yazd to suspend Niknam’s membership to the city council in accordance with a ruling by the Court of Administrative Justice. However, Sefid announced his refusal to implement the order two days later, on Oct. 11, and insisted that he would resign from his post if the suspension was not revoked.

Reformists strongly criticized the Guardian Council decision, calling it illegal. Many political figures asked that parliament step in and revoke Jannati’s order. Even parliamentary speaker Ali Larijani, himself a Principlist, opposed the decision.

In a meeting with Yazd city councilors on Oct. 18, Larijani said, “I said from the start that we do not approve of this method. In my talks with Ayatollah [Ahmad] Jannati, the honorable secretary of the Guardian Council, I emphasized that local councils should be handled according to the law. … The Court of Administrative Justice getting involved in the matter has not been a timely move either, and I mentioned this point to the judiciary as well.” Larijani added, “If this matter is not resolved, we have no choice other than to refer it to the Expediency Council for a final resolution.”

Also on Oct. 18, Guardian Council spokesman Abbas-Ali Kadkhodaei said that Jannati’s ruling was unchangeable and its implementation mandatory: “Anytime one of the Guardian Council jurists sees a measure that is against Islamic law [Sharia], he can step in and say so. Those who object to this have no knowledge of the laws and want to look at the issue from an expediency perspective.”

This was not the end of the story. On Oct. 24, hard-line cleric Ayatollah Mohammad Yazdi, Iran’s former judiciary chief (1989-99) and a current member of the Guardian Council, announced that “the jurists in the [Guardian] Council have unanimously voted for the suspension of Sepanta Niknam, the Zoroastrian member of the Yazd City Council. This is a decision that is lawful, in accordance with Islamic laws, definite and nonretractable. No one can revoke this law.” He then warned that any attempts to overturn this ruling would be “a fight against the principle of the Islamic Republic of Iran, which the establishment surely would not tolerate.”

With rising controversy, the Rouhani administration was soon pulled into the issue as well. On Oct. 25, Shahindokht Molaverdi, the president’s special aide on citizens’ rights, said, “There is no legal prohibition against Sepanta Niknam’s membership of the Yazd City Council — neither from a citizen’s rights point of view nor in regard to any other law.”

Presidential adviser Hesamodin Ashna also criticized the measure on Oct. 26 through a post on his Telegram channel: “Those who base Sepanta’s suspension on Islamic laws [Sharia] or legal reasons are now faced with a difficult challenge. They must clarify their position regarding the three-dimensional identity of ‘Islamic, Republic, Iranian.’ The words and logic of some Guardian Council jurists, their legal and Sharia discussions have become too common. The quality and political approach adopted to deal with this phenomenon will determine the future of what [our] national identity means and the effectiveness of citizens’ rights in Iran.”

Now, while the Yazd City Council has issued a “temporary leave of absence” for Niknam, differences over whether or not he should be allowed to maintain his post in the council continue to remain in place with various political entities in Iran.