Turkey expects the public to fund a huge increase in military expenditures through new direct tax hikes and price increases. 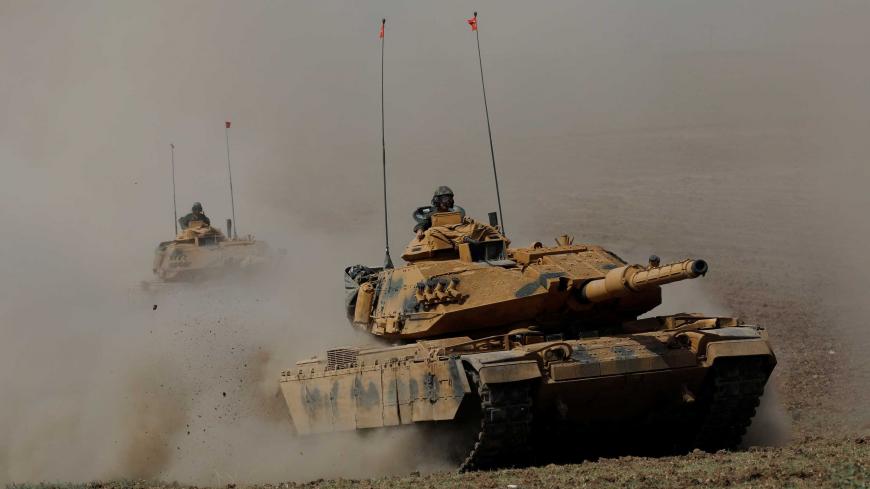 A Turkish tank maneuvers during a military exercise near the Turkish-Iraqi border in Silopi, Turkey, Sept. 26, 2017. - REUTERS/Umit Bektas

Turkey plans to boost its military spending significantly next year, according to preliminary budget figures revealed this week.

Turkey is currently the world's 18th-largest military spender, with an estimated 2016 outlay of $14.8 billion, according to Stockholm International Peace Research Institute’s (SIPRI) Fact Sheet, which was released in April. SIPRI notes the figure is an estimate because, since the attempted military coup in July 2016, detailed data has become difficult to obtain.

But one fact is beyond dispute: The government is planning to meet an expected 30% increase in military defense expenditures by direct taxation of its citizens and a series of price hikes to be borne by the public.

The Finance Ministry gave parliament a draft 2018 budget Oct. 16 and expects to hand legislators the final proposal Oct. 25. Though education is to receive the largest chunk of the budget, Minister Naci Agbal told local media the huge hike in military spending reflects a "war economy." He cited "geopolitical risks and the budget increases these risks require." He said that of about $7.2 billion in extra revenues to be derived from surcharges on vehicles, fuel, real estate and personal income taxes, about $2.3 billion will be directly allocated to the defense industry. Turkey is expecting a $5.2 billion increase in 2018 defense expenditures.

According to Agbal, in 2018 a supplementary $7.5 billion will be transferred to Turkey’s military/defense budget. Of this new funding, about $2.3 billion will be allotted to the Defense Industry Undersecretariat, which procures Turkey’s weapons systems and equipment. Moreover, the Defense Ministry budget will rise by 41% to $12 billion. The budget of the Interior Ministry will be augmented by 25%, the Gendarmerie Command budget will increase by 42%, while the national police budget will go up by 18% and the National Intelligence Service budget will get an additional 20%.

All told, about $26 billion will be spent on military defense expenditures, out of a total national budget of $195 billion. That amount is likely to put Turkey in SIPRI’s top 15 defense spenders in 2018.

According to Arda Mevlutoglu, a well-placed expert on the Turkish defense industry, a new trend is visible in Turkey’s defense and security spending. He said that because of Turkey’s growth rate, rapid increases in military defense expenditures are not reflected in gross domestic product. Mevlutoglu also cited a notable increase in national manufacturers' income, saying, “For example, while the total revenue of the Turkish defense and aeronautic industries was $1.855 billion between 2006-2016, it is now $5.968 billion.”

Turkey, while updating its national defense and deterrence capacity during the past 10 years, also has been focusing on long-term investments and mobilizing national resources. There was little off-the-shelf procurement to combat security threats, as Ankara believed its defense and security resources were adequate to cope with existing and anticipated threats.

But Mevlutoglu emphasized that, especially with developments in Syria and Iraq, "the nature and dimensions of threats in the region usually exceed the capacity of any one regional country to cope with."

"This requires that a sensitive balance has to be maintained between long-term capacity development nationally" and urgent needs to procure items from outside sources.”

Mevlutoglu elaborated: “In modern combat and similar operations, ammunition consumption usually exceeds all predictions. We saw examples of this in the 1999 NATO operation [against Yugoslavia], 2003 Gulf War, 2011 Libya operation, Yemen operations of the Arab coalition and lately in the US-led coalition operation against the Islamic State. [Long-running] struggles against asymmetric threats in the combat zone [require] serious production and accumulation of ammunition. ... Because of the asymmetric and urban warfare requirements, the need for specific equipment and vehicles, which are usually high-cost items, exceed all expectations.”

Although the predicted budget increases to defend Turkey’s national interests in Syria and Iraq appear high, it's possible such amounts are still inadequate for procurement from national and foreign defense industries. In short, the additional economic burden of further military operations in Syria will be considerably higher than before.

According to the Turkish military's latest figures, released in April, Turkey has 362,284 armed military personnel, excluding the Gendarmerie and the Coast Guard. Of that figure, 201 are generals, 25,728 officers, 64,655 noncommissioned officers, 47,167 contract sergeants, 16,018 contract privates first-class and 208,515 nonprofessional conscripts. Only 45% of the Turkish Armed Forces can be classified as fully professional.

With this structure, Turkey has Europe’s second-largest army, if Russia is included.

According to a military source who asked to remain anonymous, about 70% of Turkey’s military/defense spending goes toward personnel expenses. Of the remaining funds, 25% is spent on new weapons systems and only 5% goes to modernization and research and development projects. Obviously, Turkey has to find ways to curtail personnel expenses while transforming to its military to a professional force and reducing its size, without sacrificing operational effectiveness.

The source added that Turkey currently buys more than 60% of its military equipment and supplies from national resources. This ratio will increase to about 70% in three years. Local production is of vital importance for Turkey, but when compared with foreign resources, local costs are far too high. Turkey has to find new markets for its local production to ensure its defense industry's sustained growth.

However, given the lengthy state of emergency, it's been difficult to conduct a transparent debate in parliament and in public on how to cut the number of military personnel effectively.

That might explain why I couldn’t find a single reliable report, analysis or academic study during my research for Turkey's 2016-2017 defense and security expenditures. There is simply no reliable data for the past two years. Turkey’s already-opaque defense/military expenditures are now concealed behind a screen of secrecy.

Correction: Oct. 18, 2017. An earlier version of this article included statements from Minister Naci Agbal identified as given to Al-Monitor. They were rather made to local Turkish media outlets.