The dispute between Baghdad and Erbil threatens a key border crossing used to resupply US-backed troops battling the Islamic State in Syria. 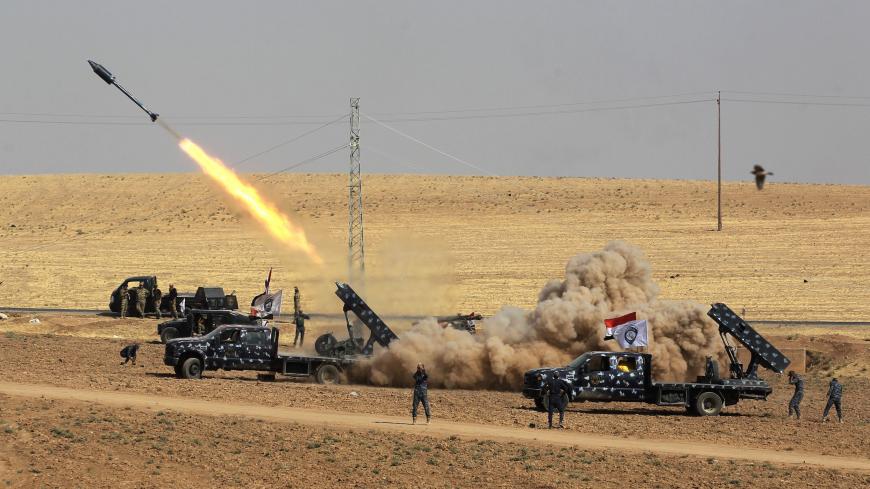 Iraqi security forces launch a rocket against Kurdish peshmerga positions in the area of Fish Khabur, located on the Turkish and Syrian border in the Iraqi Kurdish autonomous region, Oct. 26, 2017. - GETTY/AFP/Ahmad al-Rubaye

The Donald Trump administration is pushing to keep open a disputed crossing on the border of Iraq and Syria crucial to the fight against the Islamic State (IS) amid a military standoff stemming from last month's independence vote in Iraqi Kurdistan.

Kurdish officials in the semi-autonomous Rojava region had threatened over the weekend to close the three-way crossing at Fish Khabur that joins Iraq, Syria and Turkey. They say the western side of the border has come under threat from mortar fire from nearby Iraqi troops as they advance toward Kurdish-held areas.

The US-backed Syrian Democratic Forces (SDF) have received truckloads of supplies through the border crossing. The route is also used to provide heavy machinery used for de-mining, reconstruction and recovery efforts in areas that enjoy some autonomy from the Bashar al-Assad regime, such as the former IS stronghold of Raqqa.

On Saturday, Kurdish officials acknowledged the statement complaining of shelling but told Al-Monitor they had not closed the border. The US-backed military effort also said no disruptions had occurred.

“In response to allegations that recent tensions between ISF [Iraqi Security Forces] and Kurdish forces is preventing coalition logistical movements in the region, that is not true,” a spokesperson for the US-led international coalition told Al-Monitor. “The coalition is currently able to move supplies throughout our area of operations without significant issues.”

But an uptick of high-level meetings confirms that the US government is showing increasing concern that ongoing clashes between Kurdish fighters and the Iraqi army could upset the flow of American supplies through the region.

Over the past week, Brett McGurk, the top US diplomat supervising the counter-IS fight in Iraq and Syria, said he has pushed Iraqi and Kurdistan Regional Government (KRG) officials to return to the bargaining table to settle disputes over land, borders and airports. Iraqi Prime Minister Haider al-Abadi also met today with Army Gen. Joseph Votel, the top US military commander in the Middle East.

“We continue to work closely with our Iraqi partners on maintaining border access into [northeastern] Syria for urgently needed humanitarian and stabilization assistance in Raqqa post-liberation,” a State Department official told Al-Monitor.

Experts say the tensions over Fish Khabur, a crossing that helps supply a growing network of US military and air bases in SDF-controlled Syria, provides a window into the murky politics surrounding the Kurdish referendum in September, and an explanation for US opposition to the move.

“Baghdad really does believe that [Turkish President Recep Tayyip] Erdogan does intend to create a zone of influence in Iraq, but when it came to the KRG and the referendum, they closed ranks,” said Nicholas Heras, a fellow at the Center for a New American Security. “That was the signature moment that put Fish Khabur at risk. That was one of the major reasons the US was opposed to it.”

What’s more, the United States boasts large air and logistical facilities in Erbil that handle much of the military goods, reconstruction aid and relief workers that flow into Syria. Disruption at Fish Khabur could put more pressure to supply and expand US bases inside war-torn Syria — potentially putting US service members at risk.

In “two and a half years of fighting this fight with our surrogates, they've lost thousands, we've only lost two service members,” US special operations commander Gen. Raymond Thomas said at the Aspen Security Forum in July. “It's their fight, they've got to embrace it more than we do.”

The Defense Department estimates that the three-year US-led effort to defeat IS in Iraq and Syria has cost taxpayers $17 billion. That figure is around 1% of America’s nearly $1.5 trillion in war-related spending since the Sept. 11 attacks.

But losing Fish Khabur, Heras said, “would potentially reverse that course and make it much easier for Bashar al-Assad to control how reconstruction and stabilization is done. It would be a benefit to Assad’s effort to play by his rules.”

“All of this is definitely doable, it just makes the US presence in Syria have much more permanence,” Heras told Al-Monitor. “It increases the notion that Assad will hammer on the idea that Washington is putting in a long-term presence.”