How Egyptian activists are trying to curb polygamy

A number of activists launched a Facebook campaign to add a new condition in marriage contracts, requiring the first wife’s permission for her husband’s second marriage. 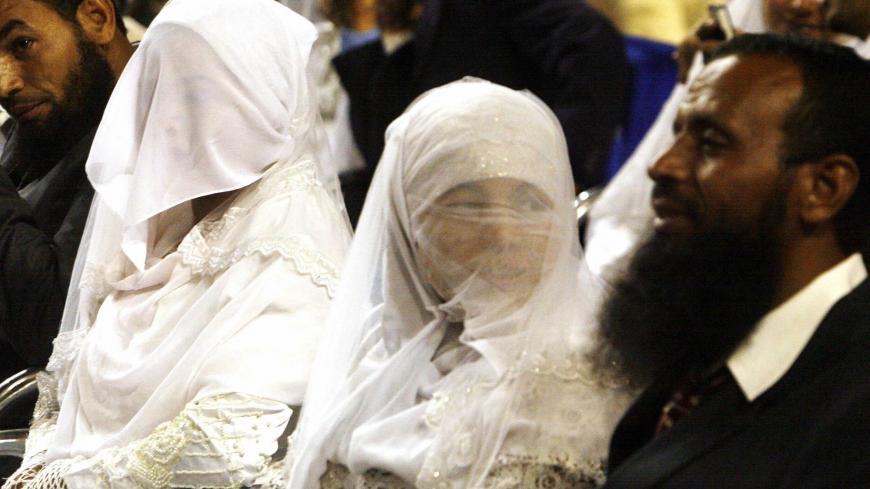 Egyptian brides sit with their faces covered by veils during a wedding in Cairo, Egypt, Sept. 5, 2007. - KHALED DESOUKI/AFP/Getty Images

CAIRO — Through Facebook, social media activists in Egypt have been calling since Oct. 1 for adding a special condition in marriage contracts, requiring the first wife’s prior consent in the event that her husband seeks a second wife under a polygamy arrangement.

Media activists posted a photo showing a copy of a marriage contract that added this condition, claiming it was officiated in Egypt.

This sparked a wide controversy in Egypt, pitting those who believe this condition is one of the first wife’s most basic rights against those who see this as contradictory to Islamic Sharia, which allows men to marry up to four women.

Member of parliament Abdel Moneim al-Alimi, a member of the Legislative and Constitutional Committee, told Al-Monitor that this social media campaign will be supported by the draft law he submitted on Oct. 2 to Egypt’s parliament to amend the law organizing the marriage officiant profession.

“A marriage contract aims to regulate marital life away from disputes and conflicts that may disrupt this union. Disputes about the wife’s education or work after marriage or the husband’s second marriage as well as other disputes usually lead to separation and the fragmentation of the family after an arduous journey of judicial disputes during which the spouses fail to agree on rights and duties,” he said.

Alimi said, “A condition was included in the draft law to regulate the relation between the spouses in the marriage contract so as to put an end to these disputes and to take judicial action against those who violated these conditions in record time.”

He further pointed out that it is up to the Azhar Islamic Research Academy and not to specific persons or movements to determine the compatibility of the draft law with Islamic Sharia.

Asserting that the draft law is compatible with Islamic Sharia, he indicated that the Islamic Research Academy would approve it because Islamic Sharia allowed both spouses to add conditions to protect their rights, to preserve their interests and to have guarantees.

On another note, Ahmed Khalil, the head of the Nour Party's parliamentary bloc, told Al-Monitor that he will not talk about the draft law and whether it violates Islamic Sharia because this falls within the competence of the Islamic Research Academy, but that he will rather address the usefulness of the draft law.

He said, “Hundreds of draft laws have been submitted to Egypt's parliament. These inappropriate draft laws have preoccupied public opinion and caused controversy, while parliament ought to take care of the draft laws that remedy the country’s current problems and set the foundation for the Egyptian state over the next 100 years.”

Khalil added, “What second marriage are we talking about at a time when the number of spinsters in Egypt stands at more than 11 million? Egyptian young men are barely capable of getting married once, let alone a second marriage.”

He said, “Parliament ought to enact laws that would make it easier for young people to marry instead of addressing exceptional cases.”

On the other hand, Abdul Hamid al-Atrash, the head of Al-Azhar University’s Fatwa Committee, quoted hadith from the Prophet Muhammad that said Muslims are bound by contract conditions except for those that violate Sharia.

He added, “This condition is not tantamount to an infringement of the husband’s rights since it is the husband who is waiving his right.”

Atrash explained, “If a man has the right to marry more than one and consents to waive this right, than the condition [of the first wife’s prior approval] would therefore be valid. In this case, the first wife would hold the keys to her husband’s second marriage. A man can still be capable of having another wife without harming his first wife, since in Islam doing justice between wives is a prerequisite for polygamy.”

Abla Ibrahim, the director of the Arab League's Women's Department, rejected the draft law. She told Al-Monitor, “I do not agree to such an unreasonable condition in the marriage contract. At the beginning of their marriage, both spouses would have strong emotional feelings and would rule out the idea of a second marriage. But as life goes on, a man could consider a second marriage. I think that the husband should submit to the court the reasons for which he wants a second marriage, and it would be up to the judge to decide whether to allow him or not to do so. The first wife is not a neutral party, and certainly she would not want her husband to take on a second wife.”

However, National Council for Women member Sanaa Al-Saeed told Al-Monitor, “The condition requiring the wife's prior consent for her husband’s second marriage is stipulated in the applicable personal status law, but it is not being enforced as a result of legal maneuvers by lawyers.”

She said the law gives a wife whose husband marries a second wife the right to ask for divorce even if she had not stipulated in the marriage contract that he should not marry a second wife.

Saeed added, “However, the law stated that this right is subject to a one-year statute of limitation as of the date on which the wife becomes aware of her husband’s marriage to another women. This point is being exploited by lawyers. We hope the new draft law includes implementation controls and not rigid legal rules.”

She further pointed that Muhammad did not allow Ali bin Abi Talib to take on another wife besides Muhammad's daughter Fatima Zahra because this would hurt her, which confirms that the marriage contract condition of the first wife’s approval on the second marriage is in accordance with Islamic Sharia.

For his part, Sheikh Sharif al-Hawari, a board member of the Salafi Call, told Al-Monitor, “The rule in polygamy is the lack of [such] condition. Prophet Muhammad and his companions were married to several women, and no one reported that they ever waited for their first wife's permission.”

He explained that Muhammad's rejection of Ali bin Abi Talib is a special case related exclusively to Fatima because the second wife was the daughter of Abu Jahl, an infidel.

Hawari added, “Moreover, the prophet did not forbid Ali from getting another wife, but he asked him to divorce Fatima if he insisted on marrying the daughter of Abu Jahl. After Fatima’s death, Ali married eight women. Therefore, this example cannot be cited when talking about polygamy.”