Despite the partisan divide over the nuclear deal, there is overwhelming bipartisan consensus in Congress to apply more sanctions on Tehran and its proxies. 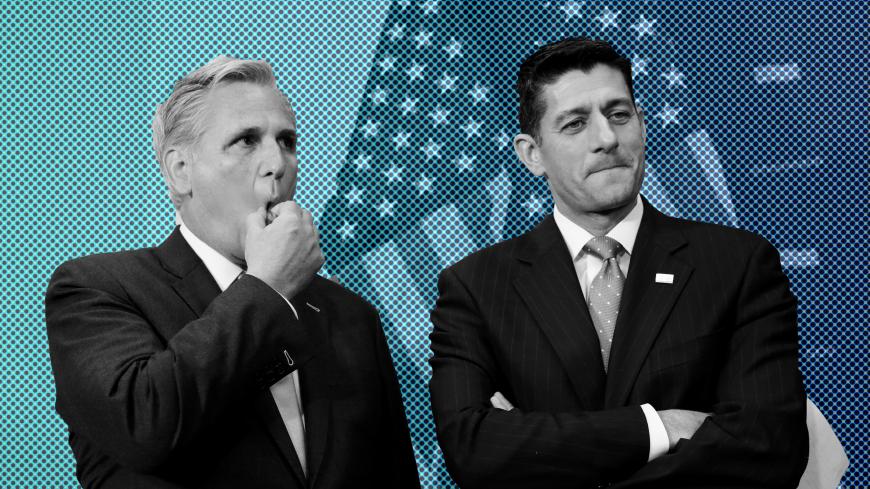 Despite a purely partisan Republican push to alter the terms of the Iran nuclear deal, an overwhelming majority of US lawmakers from both parties continues to advance legislation to counter Iranian behavior throughout the Middle East.

The House passed four bills today and Wednesday taking aim at Iran’s ballistic missile program and its support for Hezbollah, the Lebanese Shiite paramilitary group fighting alongside Iranian forces on behalf of the Bashar al-Assad regime in Syria. In addition, Iran hawks in Congress continue to press the Donald Trump administration to ban US aircraft sales to Iran and designate the Islamic Revolutionary Guard Corps (IRGC) as a foreign terrorist organization.

"The whole thing with the [nuclear deal] that irked me throughout was that during the course of the negotiations … we were told consistently that this was only about nuclear weapons,” Rep. Eliot Engel, D-N.Y., the top Democrat on the House Foreign Affairs Committee, told Al-Monitor. “We couldn’t raise terrorism, we couldn’t raise ballistic missiles. We couldn’t raise all the other things against Iran and it frustrated me to no end.”

“I think those of us who really feel that Iran is a major cause of instability in the Middle East need to make sure that Iran is sanctioned,” Engel added.

In July, Congress passed the first round of sanctions on Iran since the 2015 nuclear accord. The Iran Ballistic Missiles and Sanctions Enforcement Act, which the House passed 423-2 today, would further expand sanctions on Iran’s ballistic missile program. The Senate must now vote on the additional sanctions package before it can head to Trump’s desk.

Engel, the lead cosponsor of both Iran sanctions packages, has described today’s bill as “pretty similar” to the July sanctions package. The new version, however, would affect entities and individuals supporting Iran’s ballistic missile program even if they don’t have assets in the United States.

The House also passed three bills targeting Hezbollah on Wednesday. The US government considers Hezbollah a terrorist group and US lawmakers overwhelmingly regard it as an Iranian proxy.

“They’re giving the money to Hezbollah to kill individuals and fund terrorism around the world,” House Majority Leader Kevin McCarthy, R-Calif., said on Fox News before Wednesday’s votes. “And we’re putting an end to that, continuing to put the sanctions and the pressure on.”

Companion legislation passed the Senate unanimously earlier this month. The House version, however, contains some extra provisions that single out Iran and Russia for their support of Hezbollah.

Specifically, the House version amends a 2010 Iran sanctions package to include Iran’s support for Hezbollah and directs the administration to sanction government entities that are already on the State Department’s state sponsor of terrorism list if they support Hezbollah. Iran, Syria and Sudan are currently the only three countries on that list.

Engel, the lead cosponsor of the Royce bill, told Al-Monitor that he's optimistic its Iran provisions will survive reconciliation with the Senate version.

“I think ultimately they won’t disappear because I think both sides of the aisle understand that Iran’s a threat and even those who want to keep the [Iran deal] don’t want to take the pressure off Iran,” said Engel. “When we do things and wrap it up for the year, I think the Iran sanctions have to be in there.”

The House also unanimously passed legislation from Rep. Mike Gallagher, R-Wis., to impose overlapping sanctions on foreign states and individuals for providing support to Hezbollah due to its alleged use of human shields. The sanctions in both Hezbollah bills would target the same individuals and entities, but its supporters say the Gallagher bill still has value.

“The purpose of these bills, especially the reporting part, is to highlight the various harmful actions which Congress wants to expose with regard to Hezbollah,” said Joseph Gebeily, the president of the Lebanese Information Center, a think tank critical of Hezbollah.

Gebeily added that the Gallagher bill “puts more focus on the United Nations Security Council’s responsibility in disarming Hezbollah and preventing its military operations in Lebanon.” The bill requires the US ambassador to the United Nations to “secure support for a resolution that would impose multilateral sanctions against Hezbollah for its use of civilians as human shields.”

Lastly, a resolution offered by Rep. Ted Deutch, R-Fla., to urge the European Union to designate the political wing of Hezbollah as a terrorist organization passed the House unanimously. While the EU considers Hezbollah’s paramilitary wing to be a terrorist group, US lawmakers have repeatedly voiced their frustration that it does not extend that designation to Hezbollah parliamentarians and Cabinet officials in Lebanon.

House Homeland Security Committee Chairman Michael McCaul, R-Texas, continues to push for adoption of his bill urging the State Department to designate the IRGC as a foreign terrorist organization. Sen. Ted Cruz, R-Texas, has a companion bill in the Senate.

Trump himself designated the IRGC as a terrorist-supporting entity when he declined to certify the nuclear deal earlier this month, but the move falls short of what some in Congress are asking for.

“There’s not really an expansion of sanctions on the IRGC,” said Kenneth Katzman, an Iran sanctions expert at the Congressional Research Service. Trump’s executive order “has a slight travel restriction, obviously, but how many IRGC people … are going to realistically get visas to come to the United States?”

McCaul agrees more could be done.

“The president, when he sanctioned the IRGC, went a long ways in terms of getting the idea of it,” he told Al-Monitor. “However, they didn’t designate it as a foreign terrorist organization. So I’d like to complete that.”

McCaul told Al-Monitor that his bill is currently held up by staff on the House Judiciary Committee who believe that designating terrorist organizations should remain strictly within the purview of the administration.

“Maybe we’ll work with leadership to put it to the floor anyway,” he said.

Iran hawks in the House are also fighting to preserve legislation that would that would bar US aircraft manufacturers, such as Boeing and Airbus, from selling civilian airliners to Iran. Rep. Peter Roskam, R-Ill., included the language in a spending package in September.

The 2015 nuclear deal paves the way for such sales, but Roskam and others fear that Iran could use the civilian airliners to transport troops to fight on behalf of the Syrian regime. The Senate version of the appropriations bill, however, does not contain such language.