Cleaning up the booby traps that IS fighters have left all over the country will take many years and millions of dollars. 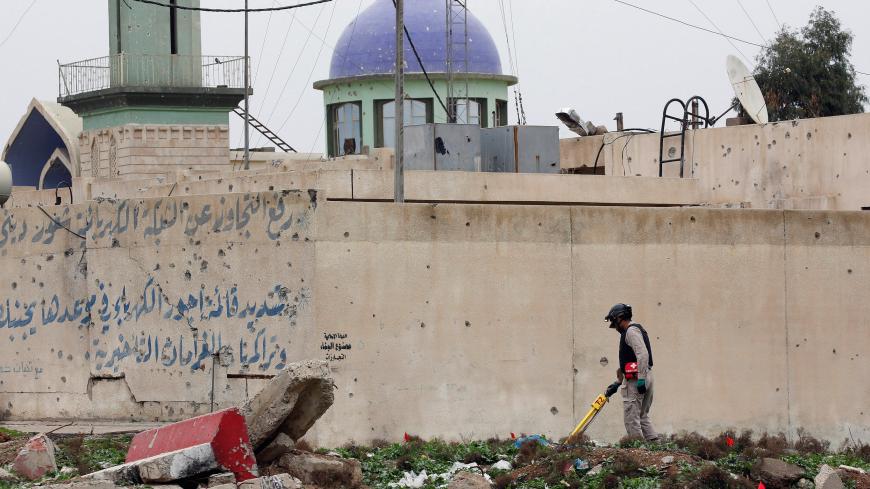 A member of an Iraqi unit searches for bombs and mines near the site of an explosion in the city of Mosul, Iraq March 19, 2017.

Iraq’s fight to defeat the Islamic State won’t end with the military defeat of the group.

As the US-backed Iraqi Security Forces liberated Mosul and Tal Afar this summer, retreating fighters continued to leave behind scores of complex improvised explosive devices (IEDs), deliberately hidden in populated areas to kill and injure civilians. US officials tell Al-Monitor that American support for the Herculean effort to clear those vestiges of the three-year war might be needed for decades.

“If you’re looking at the scope of contamination in these areas that have been liberated from [IS], it’s analogous to Europe after World War II [where] they’re still finding stuff today,” Jerry Guilbert, deputy director for programs in the State Department’s Office of Weapons Removal and Abatement, told Al-Monitor. “This is ultimately going to have to be viewed as a long-term problem that’s in need of a local solution. It’s going to take years and years and hundreds of millions of dollars to clean up all of it.”

"It’s going to take years and years and hundreds of millions of dollars to clean up all of it."

US and Iraqi troops have been dealing with the IED threat since the beginning of US military operations in Iraq in 2003. The State Department estimates that Iraq is contaminated by up to 15 million land mines and unexploded ordnance, some dating back as far as the 1940s.

To deal with the threat, the Donald Trump administration has requested $40 million in Iraqi demining funds for the fiscal year that starts Oct. 1, more than twice the initial fiscal year 2017 request (supplemental funding eventually brought that total to $48 million). From 2003 through 2015, the United States spent more than $300 million on bomb disposal in Iraq, according to the State Department.

While State Department demining efforts in Iraq have historically focused on cleaning up after conflicts such as the Iran-Iraq War in the 1980s and hazards left during Saddam Hussein’s occupation of Kuwait, officials say IS militants have deliberately targeted civilians in densely populated areas. They’ve placed booby traps in everything from household products such as refrigerators, shoe racks and vacuum cleaners to dead bodies.

One US-partnered organization even found IEDs in Syrian peach orchards, specifically designed to deny food supplies to returning villagers. The extent of civilian-targeted explosives left in the group’s wake is like nothing State Department officials have seen in the history of the weapons-removal program, which has operated in more than 30 countries for a quarter of a century.

IS “is trying to sow confusion, tragedy and death in its wake as it recedes,” Guilbert said. “It’s a level of evil that we just haven’t seen elsewhere.”

The UN Office for the Coordination of Humanitarian Affairs estimates that most Iraqi cities retaken from IS will require IED clearance for residents to return. A UN Security Council resolution adopted last year also calls on Iraq’s government to accelerate the clearance of IEDs from areas liberated from IS to speed up the return of refugees and internally displaced people, who still number in the millions.

While demining organizations can only account for a fraction of casualties in Iraq, the Landmine and Cluster Munition Monitor identified 39 victims of booby traps in 2016. In 2015, undetonated explosives caused at least 55 casualties, and another 63 the year before. 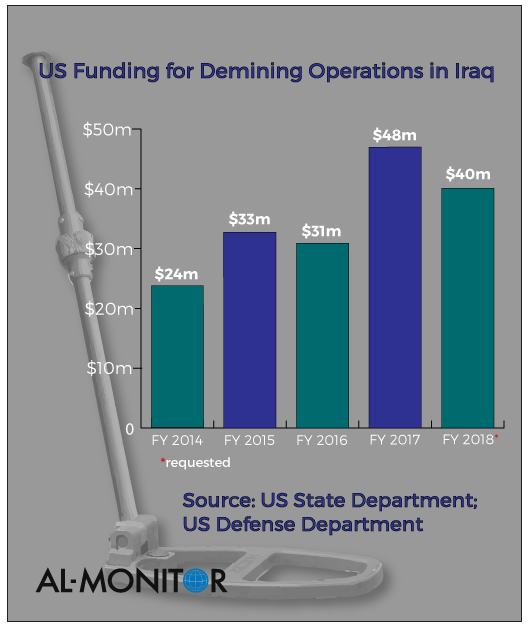 To deal with the threat, the State Department-led program to clear Iraq of IS' IEDs is taking an approach that's different from traditional explosive ordnance programs. Working with the United Nations, the Iraqi government and local administrators in heavily contaminated cities like Mosul and Ramadi, US officials are directing an audit of key critical infrastructure threatened by the explosives before doing a broader survey. Explosive ordnance disposal teams that include contractors and military personnel also continue to follow the front lines of combat.

The US-led coalition has helped train more than 110,000 Iraqi security personnel, including instructions for countering IEDs, Pentagon officials say. While the State Department eventually hopes to leave the Iraqis in charge of IED clearance, the difficulty of clearing densely populated areas jammed with explosives that have multiple switches means that the effort often requires ordnance-disposal experts with 15 years of experience in a modern military force.

In cities such as Mosul, much of which was leveled in the house-to-house fight to clear IS, IEDs have been found tangled amid the remaining infrastructure and rubble, making them challenging to remove safely.

“This goes all the way back to 2003. They had to do kind of the same thing — clearing mines and ordnance,” Mark Hiznay, associate director of the Arms Division at Human Rights Watch, told Al-Monitor. “This new conflict has added a new layer of dealing with the legacy of war. Think of it as lasagna, piled up on top of each other.”

Record levels of US-led coalition airstrikes have also left behind hazards. The Associated Press reported that Lt. Gen. Stephen Townsend, departing commander of the US-backed campaign to defeat IS, had declassified 81 locations where anti-militant airstrikes left unexploded munitions. A spokesperson for the operation told Al-Monitor that the information was provided to UN demining partners through the US Embassy in Baghdad.

Even though IS has lost more than 90% of the area in Iraq that it once considered its caliphate, State Department officials insist the program will continue to be a US focus even after the defeat of the militant group.

“We’re probably going to remain involved in Iraq for a while,” Guilbert said. “This is a major priority for the US government.”