The claim by HaBayit HaYehudi leaders that their latest initiative is intended to create a balance of power between the different government branches is nothing but a smoke screen; their real purpose is to undermine the Supreme Court. 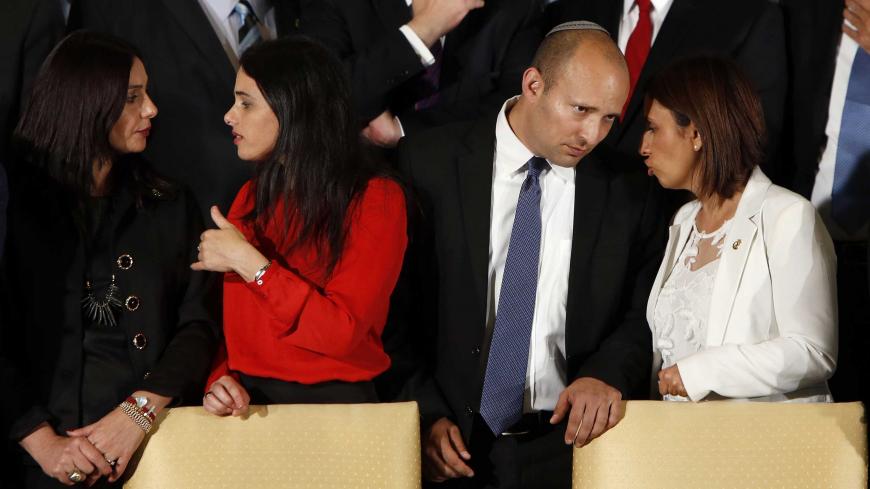 (L-R) Minister of Sports and Culture Miri Regev, Minister of Justice Ayelet Shaked, Minister of Education Naftali Bennett and Minister of Senior Citizens Gila Gamliel chat prior to the traditional photograph in honor of the swearing in of the 34th government of Israel, Jerusalem, May 19, 2015. - GALI TIBBON/AFP/Getty Images

On Sept. 14, HaBayit HaYehudi Chairman Naftali Bennett and the No. 2 member of his party, Justice Minister Ayelet Shaked, dropped a political bombshell with their initiative to limit the power of the Supreme Court. It could eventually lead to a genuine constitutional crisis.

The two described the move as nothing less than revolutionary. It will be based on their proposed Basic Law legislation, which would limit the Supreme Court's authority to overturn laws approved by the Knesset. As of now, the Supreme Court can overturn laws if the judges interpret them as conflicting with Basic Laws (Israel has no constitution). What Bennett and Shaked are proposing is a set of clearly defined conditions under which the court could overturn a law, limiting its power to those circumstances only. Furthermore, the law would include an Article of Overruling, which would allow the Knesset, under certain conditions, to approve a law even though it was overturned by the Supreme Court. Bennett and Shaked have yet to set the parliamentary majority, which will be needed to reject the Supreme Court's decision to overturn a law. But based on their tenuous relationship with the legislative branch, it is reasonable to assume that it would not require a special majority.

Assuming that the initiative evolves into a piece of proposed legislation and wins majority support among the coalition, it could lead to a constitutional crisis. It will likely be brought before the Supreme Court itself. The court will then have to rule on a legislation concerning its own power and authority and impacting its special position as the gatekeeper of Israeli democracy.

Ever since their proposal was made public, the two leaders of HaBayit HaYehudi have given numerous interviews to the media. They describe their proposal as intended to strengthen democracy and as the basis for the creation of a formal constitution for Israel. In an interview with Army Radio, Shaked said that the Basic Law would prevent the Supreme Court from gnawing away at the power of the Knesset and restore an important balance between the different branches of government.

Shaked and Bennett's constitutional revolution is occurring in a convenient (for them) political climate. Israel is ruled by a right-wing government, and many of that government's senior members, including Tourism Minister Yariv Levin, have already marked the Supreme Court as an arm of the left. Among the settlers, many of whom support HaBayit HaYehudi, the Supreme Court is often perceived as an enemy who prefers the Palestinians over them.

Ironically, the group that provided the greatest momentum to Shaked and Bennett's dramatic move was the Supreme Court itself. This month alone, its justices overturned several new laws passed by the Knesset over the past few months. These rulings form the basis of the two ministers' main argument against the court.

On Aug. 6, the Supreme Court shocked everyone again when it announced that it had overturned a law taxing people who own three or more apartments, the flagship initiative of Finance Minister Moshe Kahlon in his effort to reduce housing costs. The judges ruled that there was a significant flaw in the legislative process and the law must be brought back to the Knesset's Finance Committee for further discussion. The ruling stated that while the law would have dramatic implications, it was passed in a rushed manner, under pressure and a sense of great urgency. Five separate appeals opposing the law were brought to the court by Knesset members from the opposition, apartment owners and businesspeople.

On Aug. 11, the Supreme Court criticized the Knesset again when it overturned an amendment to the law, which allowed the government to lock up asylum seekers in the Holot Detention Center for as long as three years. An expanded panel of nine judges ruled that the law stood in direct conflict with the Basic Law Concerning Human Dignity and Freedom. This time, again, the court's ruling was a personal blow to Netanyahu, who first proposed this amendment to the legislation.

They want to undermine the Supreme Court's ability to rein in and critique the legislative and executive branches and grant the government unlimited and unsupervised power.

On Sept. 12, the Supreme Court overturned the amendment to the Recruitment Law, which the Knesset passed in 2015. This was a law passed by the current government at the demand of the ultra-Orthodox parties to replace the Law Concerning the Equal Sharing of the Burden, which was passed by Yesh Atid in the previous government. The amendment, which was overturned last week, exempted ultra-Orthodox youth from compulsory military service. The Supreme Court ruled that the law was a severe violation of the value of equality and the constitutional right to human dignity.

Disqualifying a law is certainly a dramatic ruling, more so when several laws are disqualified or suspended over short laps of time. In this case and in the other cases as well, the Supreme Court made its decisions based on the justices’ interpretation of the Basic Laws or when a flaw was detected in the law-adoption procedure. So their decisions were punctual, reasoned and not political in nature. Still, Bennett and Shaked are using this exceptional series of rulings to justify the law that they are proposing to circumvent the Supreme Court's decisions.

In an interview with Channel 2 on Sept. 17, Bennett said, "Supreme Court justices, who are not elected by the public, can overturn laws with ease. Just last month, it exceeded its authority excessively. … We want to determine the Supreme Court's authority by law and at the same time determine under what circumstances it can act this way. There is nobody that can do such things without having the proper authority." He added, "These new circumstances in which overturning laws has become routine will force us, the legislators elected by the public, to take action to restore the proper balance of power between the different branches of government. That is what we are doing today."

Behind his lofty language about "determining authority" and "a balance of power between the different branches of government" are far-reaching implications concerning the continued existence of a democratic form of government in Israel. Bennett and Shaked's claim that they want to formalize legislative processes and authorities is nothing but a smokescreen concealing their real objective. They want to undermine the Supreme Court's ability to rein in and critique the legislative and executive branches and grant the government unlimited and unsupervised power.

So far, it looks like this is little more than a test balloon being released by HaBayit HaYehudi leaders. They want to see how much support their initiative really has in the Knesset and among the public, and how far they can push it — especially now when their Nationality Law is in the process of being legislated, too. This law would formalize the Jewish identity of the State of Israel through legislation and grant its Jewish character preference over various democratic components of statehood. In May, the law passed its initial reading in the Knesset.

Netanyahu and the other right-wing ministers have yet to respond to Bennett and Shaked's initiative. The ultra-Orthodox already regard the Supreme Court as a nemesis, meaning that they will not oppose the proposed legislation. For the most part, the general public is apathetic, while the opposition has been unable to gather enough momentum to fight back against Bennett and Shaked's disorderly behavior. What this means is that once again, all eyes are on Kulanu Party Chairman Moshe Kahlon. Despite his resounding silence, he is expected to oppose the initiative, at least according to several reports. It is, in fact, quite conceivable that despite all the socio-economic initiatives that he is trying to advance, his most important role in the Netanyahu government will be to preserve the power and independence of the Supreme Court.