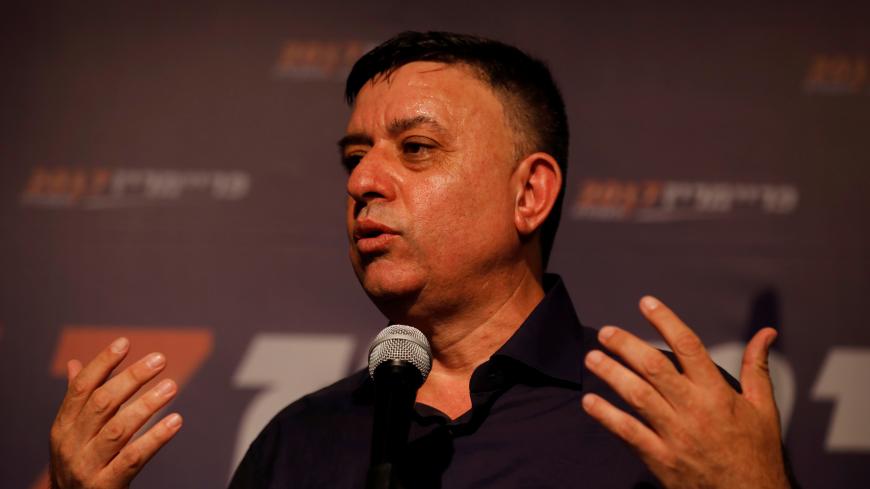 Labor Party leader Avi Gabbay could not have hoped for better results in his first test of power against his party's apparatus. Convening in Tel Aviv, Labor voted almost unanimously on Sept. 14 to approve changes to the party’s charter sought by its new chair — something no one before him had managed to engineer, not even former Prime Minister Ehud Barak. Gabbay not only pushed all the amendments through almost intact, granting him broad powers to control the party and its Knesset members, he did so with ease.

Gabbay’s sweeping new powers include picking four candidates for slots on the party’s next Knesset list and sole authority to appoint ministers and all senior officeholders in the party’s Knesset faction — that is, its chair and heads of Knesset committees. This means that Labor’s Knesset members are at his mercy, including those who vied against him for party leadership: former Minister Amir Peretz, former party Chair Isaac Herzog and Knesset member Erel Margalit. Peretz led the opposition to the charter amendments, but apparently did not enjoy a tail wind at the convention.

Herzog and Peretz are seasoned politicians. They fully grasp the meaning of Gabbay’s changes: Going forward, he is first among equals. He is the be all and end all. He is the locomotive, and they are destined to sit quietly and let him work or risk being blamed for undermining the party’s path to power.

During the past two weeks, not all had been smooth sailing behind the scenes after the extent of the changes Gabbay sought became known. The charter regulations have been a source of perpetual headache for his predecessors. Several cliques were formed in a bid to torpedo his planned moves. They all ended in a whimper.

With the convention victory under his belt, Gabbay will now have to prove what he is made of. His real test, a cruel and demanding one, began the minute he got the green light from his party. Gabbay will have to prove that he deserves the power he has been handed and that he knows how to take his party to power, that he can surge in the polls and pose a real threat to Prime Minister Benjamin Netanyahu. En route, he will have to do battle within the center-left bloc with the chair of the centrist Yesh Atid, Yair Lapid, who views himself as the camp’s candidate for the premiership and will not step aside without a fight.

Gabbay’s next challenge is huge, as are expectations of him within his party. Having swept up power almost without breaking a sweat, he must quickly prove that he can deliver in regard to Netanyahu who — despite ongoing criminal investigations against him and his associates — is still the strongest person in Israeli politics.

Since his surprise leadership victory in the July 4 Labor primaries, Gabbay has displayed a mix of self-confidence and arrogance in party matters. He does not consult with Labor Knesset members or with his predecessors. He operates like a one-man commando unit, demanding obedience of those around him. This works for as long as he is considered a young, fresh political promise.

Gabbay’s achievement at the party convention, impressive as it was, did not wipe out what is known as the Labor Party’s genetic code, a euphemism for its tendency toward squabbling, deal making and back stabbing. Incumbent Labor lawmakers will gradually experience firsthand the meaning of the power and control the amended charter grants Gabbay to appoint his own people — at their expense.

If Gabbay fails to rise in the polls, Labor's Knesset members will wage war over their standing on the party list for the next Knesset. If Gabbay decides to promise Ehud Barak the No. 2 slot — as his putative minister of defense, for example — he will turn Amir Peretz, a former defense minister, into a rabid foe. Peretz has already made clear (in his convention speech) what he thinks of Barak and has warned Gabbay against him: I handed the party to him with 19 Knesset seats, and this “two-bit tweeter” brought the party down to 13 and almost broke it apart.

Gabbay does not appear to be too worried. Now that he holds all the cards, he will probably keep ignoring Peretz and his Knesset colleagues. It is a reflection on his character, but also of his belief that he will be the one to mobilize new voters for the party: Mizrahis (of Middle Eastern origins, like himself) and Israelis on the social and geographic periphery, or in others words, moderate supporters of Netanyahu’s Likud, dubbed “Likud light.”

In recent weeks, Gabbay has shown an impressive ability to achieve his goals. He does not waste time, refusing to postpone the party convention while deflecting behind-the-scenes maneuvers designed to obstruct his path. He heard from the previous Labor chairs — Ehud Barak, Isaac Herzog and Shelly Yachimovich — that he will not be able to change things if he doesn’t do so at the outset. Start as you mean to go, he was told, or risk getting bogged down in the swamp of petty party politics. Gabbay heard them out and took note.

Gabbay is not a brilliant speaker, nor is he weighed down by a heavy agenda. He is a product of the new politics, having morphed within a short time from an almost anonymous figure into the head of a major party, courtesy of social media. Gabbay believes that through new media, he will close the gap with rival parties and garner the support of the masses.

After being elected Labor chair, Gabbay said his target will be to win 30 Knesset seats. At the convention, he focused on conveying a message of unity in the ranks, in effect telling the Knesset members and activists that their home needs change and renewal. “If we can’t bring unity to our party, the public will not believe we can bring unity to Israel. If we aren’t able to change, why should the public believe we can change the country?” Gabbay asked. “We are here to bring the people of Israel hope for change … I pledge that the Labor Party will restore its position as the home of all Israelis.’’

At the convention, Gabbay was flanked on one side by Herzog, his predecessor, and on the other by Yachimovich, Herzog’s predecessor. Peretz and Secretary-General Eran Hermoni, whose wings will also be clipped under Gabbay, sat farther away. In photographs, they appear glum. Those images said it all. As long as Gabbay delivers the goods, this forced truce will be maintained.