Japan comes to the rescue of Gaza's hospitals

With funding from the Japan International Cooperation Agency, and in collaboration with the Palestinian Ministry of Health, solar panels will be installed in Gaza's hospitals to provide electricity to vital care units. 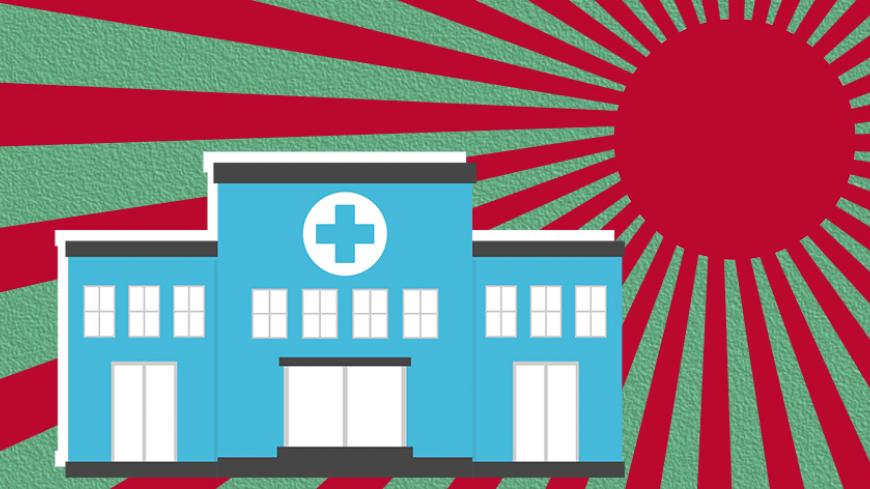 RAMALLAH, West Bank — On Aug. 3, Palestinian Minister of Health Jawad Awad authorized the installation of solar panels in public hospitals in the Gaza Strip, financed by the Japan International Cooperation Agency (JICA). Awad, Takeshi Okubo, the Japanese representative to Palestine, and JICA officials met in Ramallah to discuss the deal. The solar panels are scheduled to be installed in early September.

The project aims to secure a power supply to vital units in government-run hospitals in Gaza hit by the electricity crisis that started in 2007 in tandem with the Israeli blockade imposed on the enclave. Undersecretary of the Ministry of Health Asad Ramlawi told Al-Monitor that the project aims to provide government-run hospitals with electricity through the installation of solar panels.

“The Minister of Health gave his approval to start the first phase of the project at a cost of $1 million, which will begin within weeks after the completion of the technical studies by JICA,” Ramlawi said.

He explained that Al-Shifa Hospital, the largest medical complex in the Gaza Strip, will be the first to benefit from the project. He noted that JICA Vice President Tomiyoshi Kenichi had visited Al-Shifa Hospital on May 17 to inspect its conditions and evaluate the technical studies related to equipping some units of the hospital with solar panels. “The second stage, which has not been discussed in detail, should be initiated after the completion of the first phase,” Ramlawi added.

Since the beginning of the Israeli blockade in 2007, the Gaza Strip has been suffering from a severe electricity crisis. But recently, Gazans have been receiving only 3-4 hours of power supply a day, after the sole power station in Gaza ran out of fuel and stopped working following the decision April 27 by the government in Ramallah to halt payment to Israel for supplying electricity. This has adversely affected the work of hospitals across Gaza.

In a May 15 report, the International Committee of the Red Cross warned that “a systemic collapse of an already battered infrastructure and economy is impending” in Gaza due to the severe power crisis and noted that the crisis has affected the treatment of Gazans in hospitals.

The report continued, “On normal days, the operation room at Al-Shifa Hospital in Gaza conducts close to seven cardiac catheterizations per day. Due to power shortage, however, the number of daily operations has been reduced to fit the electricity timetable. … Due to lengthy power cuts, hospital units have to operate various equipment with the support of generators. With operating times being reduced, patients needing dialysis are affected.”

The director general of governmental hospitals in the Gaza Strip, Abdullatif al-Haj, told Al-Monitor, “Hospitals are currently running on in-house emergency generators, which are the main source of electricity supply. Hospital officials are trying to allocate this supply only to vital units such as the intensive care units, mechanical ventilator rooms and neonatal units.”

He added, “Hospital private generators are overused for 20 hours a day. They also consume large quantities of the $12 million worth of fuel supplies granted in January by Qatar to offset Gaza’s power shortage. If the current consumption rate continues, this fuel grant may be depleted within two months.”

Although solar systems — consisting of panels that absorb the sunlight as a source of energy to generate electricity — produce a substantial amount of electricity supply, this, however, is still not enough to meet the hospital’s power supply needs.

Haj explained, “Solar panels provide only alternative energy sufficient to supply vital units in hospitals such as intensive care units and operating rooms, but they are not enough to operate the rest of the hospital or the central air conditioning, which is necessary for the operating rooms and patient rooms.”

Saher Younis, the director of JICA in Gaza, told Al-Monitor that the idea of the project in collaboration with the Japanese government and JICA stemmed from the suffering of Gaza's residents under the continued blackout, mainly affecting hospitals and endangering the lives of patients.

He said the solar panels that will be installed will not supply all of the facilities of the hospital with electricity, but only the vital units that need an uninterrupted electricity supply to guarantee the safe treatment of patients.

“JICA will begin preparation for the first execution stage within days after receiving the green light from the Palestinian minister of health and after collecting all information and specifications related to the units to be supplied with electricity generated by the solar panels. The installation of the solar panels is expected to start in early September,” he said.

Younis added, “The installation stage will take two months and it is expected that all works will be completed by the end of this year, given the large quantity of solar panels to be installed in hospitals and the needed technical staff.”

Although the agreement on the implementation of the project was reached between the Japanese government, JICA and Awad, officials in charge of managing the health sector in the Gaza Strip welcomed the project and facilitated its execution.

Haj said he welcomes any project that will help citizens and the health sector in Gaza; Younis confirmed that a JICA team inspected Al-Shifa Hospital a few weeks ago.

The health sector in Gaza reels under several crises that need radical solutions, so the installation of solar panels in Gaza's public hospitals is welcomed in order to alleviate some of the suffering of patients in the Gaza Strip.