Representatives of Russia and Egypt seemed pleased with the outcome of their meetings this week, as they touched base on current regional developments and talked through their perspectives. 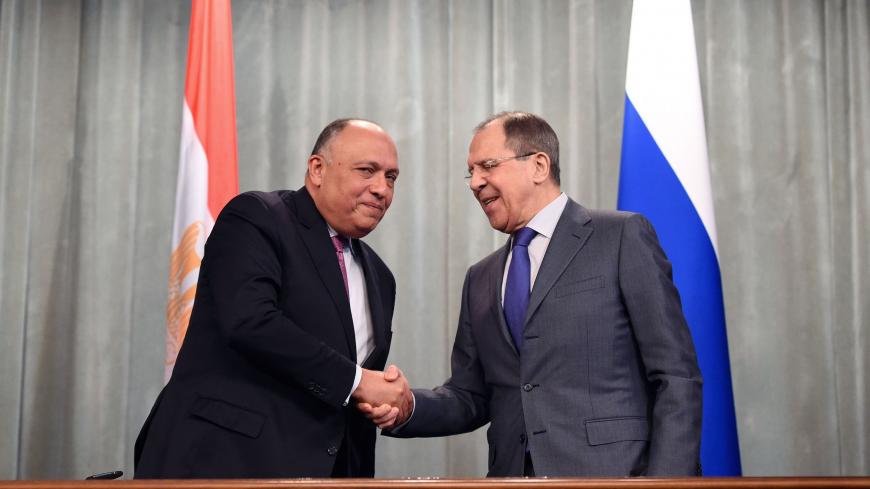 MOSCOW — With Moscow thinking about its post-Syria presence in the Middle East, building stronger ties with Egypt seems to be on the agenda.

On Aug. 21, Egyptian Foreign Minister Sameh Shoukry visited the Russian capital to meet with his counterpart Sergey Lavrov. Prior to the visit, both parties sent strong and courteous signals of the importance of the encounter. Cairo emphasized that Moscow would be the first stop on Shoukry’s three-day trip, which included Lithuania and Estonia, while Moscow had been saying that Egypt is one of Russia’s leading partners in the Middle East and North Africa and that the two countries have been bound together by yearslong traditions of friendship, mutually beneficial cooperation and concurrence of approaches to regional and international issues.

After the meeting, Lavrov kicked off a press conference with Shoukry with the same statement on the importance of Egypt as Russia’s top regional partner. Essentially, as Moscow raises its voice on a number of regional issues, having Cairo share its vision is vital for the ultimate success of Russian efforts. In this respect, it’s no wonder Lavrov and Shoukry spent half of the time in the talks discussing Syria, Libya, Yemen and the Qatar crisis. Last week, state-operated RIA Novosti news agency, referencing a source in the Russian Foreign Ministry, reported the ministry was preparing Lavrov’s tour of the Gulf, set for Aug. 27-30, with the goal of placing Russia at the center of mediation efforts in the Qatar crisis. If this is the case, then checking in with Egypt — one of the countries boycotting Qatar — was something Moscow deemed necessary to do before Lavrov’s departure to the region.

Similarly, on the Yemeni track, hours into the Lavrov-Shourky discussions, Russian Deputy Foreign Minister Mikhail Bogdanov hosted Yemen’s newly appointed ambassador to Russia, Ahmed al-Wahishi. The two discussed the ongoing civil war in Yemen and the prospects of settling the conflict, advocating “a comprehensive national dialogue with due regard for the interests of all major political forces.”

In Syria, Egyptians were instrumental in helping the Russians set up de-escalation zones in eastern Ghouta and Homs by providing a platform for several meetings in Cairo. Now Russia is engaging with Egypt to promote the formation of a united Syrian opposition delegation — the next immediate task on Moscow’s Syria to-do list, which is taken very seriously in the Kremlin. According to a news release from the Russian Foreign Ministry, Lavrov declined to dwell on details of the process, only saying, “We are working with other partners too on this, including Saudi Arabia.”

On Libya, where Russia and Egypt are working closely together, Lavrov said Moscow and Cairo had an “identical understanding of the need to prevent the isolation of any Libyan politicians, key figures or tribal leaders from the process, which should lead to restoring Libyan statehood.” Russia continues to insist that participation of “all Libyan political and tribal groups, without exception, is a precondition for progress” in settling the conflict.

Top Russian and Egyptian diplomats discussed the Palestinian-Israeli conflict, but Lavrov made only a short reference to it, saying Russia wants the talks to resume once the “proper conditions” are created “to prevent any unilateral steps.” The restrained reaction of the Russian minister is understandable, since President Vladimir Putin was going to meet Israeli Prime Minister Benjamin Netanyahu in Sochi two days later, with both parties expecting an uneasy conversation over Iran’s increasing role in Syria. Putin and Netanyahu discussed Iran, Syria and other issues Aug. 23.

The day after Lavrov’s meeting with Shoukry, Russian Deputy Foreign Minister Sergey Ryabkov met in Moscow with Israeli Ambassador to Russia Gary Koren. What is particularly striking about the encounter is that Ryabkov is primarily running the American track of Russian foreign policy; under ordinary circumstances, Bogdanov would meet with an ambassador from a Middle Eastern country.

The second part of the negotiations between Lavrov and Shoukry focused entirely on bilateral issues. Shoukry passed on a personal message from Egyptian President Abdel Fattah al-Sisi to Putin reiterating Cairo’s commitment to expanding contacts with Russia in “all areas of mutual interest,” including beefing up anti-terrorist cooperation.

The issue of direct flight connections between Russia and Egypt has been clouding progress on the bilateral agenda since the flights were suspended after a bomb exploded on a Russian passenger jet over the Sinai Peninsula on Oct. 31, 2015. The Islamic State (IS) claimed responsibility. Restoring direct flights has been a subject of continual negotiations, including during the visit of Lavrov and Defense Minister Sergei Shoigu to Egypt in May. Egyptian officials believed Moscow had been nitpicking over criteria for resuming flights. An Egyptian source close to the negotiation process told Al-Monitor on the condition of anonymity that many in Cairo thought the real reason behind Russia’s reluctance to restore the flights was Moscow’s desire to give Russia’s own resorts — particularly in Sochi, and now in the Crimean Peninsula — a chance to attract tourists. Ankara expressed a similar opinion when Moscow suspended charter flights for Russian tourists to Turkish resorts following Turkey’s downing of a Russian jet on Nov. 24, 2015.

Another issue of mutual interest discussed during Shoukry's visit was Egypt’s proposed first nuclear power plant, which Russia’s State Atomic Energy Corp. (Rosatom) is to build at Dabaa. Egypt’s State Council is still running a legal checkup of the contract with Russia, and local environmental groups are raising concerns over potential contamination of the area. The plant’s first power unit was scheduled to begin producing energy in 2024, but this could be delayed as Rosatom says contracts that are “near completion” still need to be signed to start actual construction. Moscow and Cairo have other major projects on the table that the Joint Russian-Egyptian Commission on Trade, Economic and Scientific-Technical Cooperation, convening in September, is supposed to kick-start. One initiative in which Moscow has a particular interest involves setting up an industrial zone along the banks of the Suez Canal that will include Russian companies.