An Egyptian tech school is looking to increase the representation of women in the tech industry with a new programming class exclusively for women. 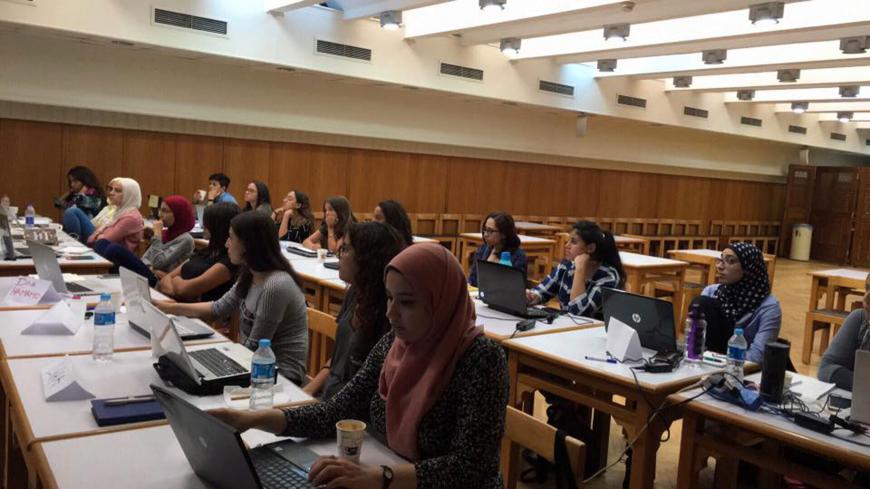 An Egyptian tech school is shattering stereotyping in the tech industry by enabling more women to learn programming, coding and elements of building websites.

AlMakinah, a Cairo-based tech school, has initiated a new program exclusively for women titled “The Women in Tech Track” with the aim of addressing the imbalances in the gender ratio in Egypt’s tech industry.

“The program includes sessions on front-end web development, data visualization, digital marketing as well as workshops on confidence and resilience and talks by industry experts about the tech field,” Hoda Hamad, the manager of the program, told Al-Monitor.

Hamad was a participant in one of AlMakinah’s tech classes. After noticing that the AlMakinah classes were mostly dominated by men, she decided to join the school’s team and launch a program for women “to rebrand the field and remove any social stereotypes set by society.”

“In our last full-stack program, we only had four girls in the class. I was one of them. And after attending this class, I decided to change that,” she said.

There is now a class of 17 bright women, 15-36 years old, from different educational and economic backgrounds. “They are currently learning front-end web development. They started on Aug. 20 and the program will go until Aug. 31,” she noted.

AlMakinah was launched two years ago to bridge the gap between the requirements tech companies seek from employees and the skills job seekers possess. Since then, the tech school has launched several programs that teach web development in a practical way that satisfies the needs of the companies looking to hire new people.

“Apart from teaching women the basics of programming and building their own websites, the Women in Tech Track seeks to get those women access to numerous job opportunities, which include remote jobs and where they could gain a stable income working from home,” Hamad said.

The Women in Tech Track also launched a hashtag on Twitter, #YouCodeGirl. “The main aim of the hashtag is to encourage women to penetrate the tech industry as well as to trigger a supportive culture among their communities,” Hamad added.

According to statistics, the representation of women in the tech industry is significantly low. In the United States, the percentage of computing jobs held by women has fallen over the past 23 years, according to a 2015 study released by the American Association of University Women, a nonprofit organization promoting gender equality. During that period, the number of women earning computing degrees also declined.

In Europe, women only make up 30% of the 7 million people working in the continent’s digital sector and they are underrepresented at all levels, especially in decision-making positions, according to a report released by the World Economic Forum in 2016.

“The gender gap in STEM [science, technology, engineering and math] industries remains stubbornly high, with women representing around 26% of the STEM workforce in developed countries,” the report added. The report also stated that the figure is even lower in developing countries.

However, according to UNESCO statistics as reported in US News & World Report, more women have recently started to study STEM in the Arab world. “In the Gulf region, women comprise 60 percent of engineering students in universities, compared with 30 percent in the US and Europe.”

According to a report by the American Association for the Advancement of Science, Egyptian female students are beginning to enter the tech field, traditionally seen as male-dominated.

Dalia Hisham, a 27-year-old programmer, said that women in Egypt are bravely facing the challenges of being in the tech industry, including the inadequate number of female role models in the field, gender bias in the workplace and unequal growth opportunities compared to men.

“But such challenges are gradually being overcome by women as they are now creating role models and mentors in the field and are having more growth opportunities,” Hisham told Al-Monitor.

“It is now getting better for women to enter the tech field in Egypt, especially amid the launch of initiatives like Women in Tech Track that seek to break gender bias and encourage more women to infiltrate into the industry,” the young programmer added.