Turkey is signaling a shift to "hard power" foreign policy by incrementally building its military presence in Qatar to a brigade-level force. 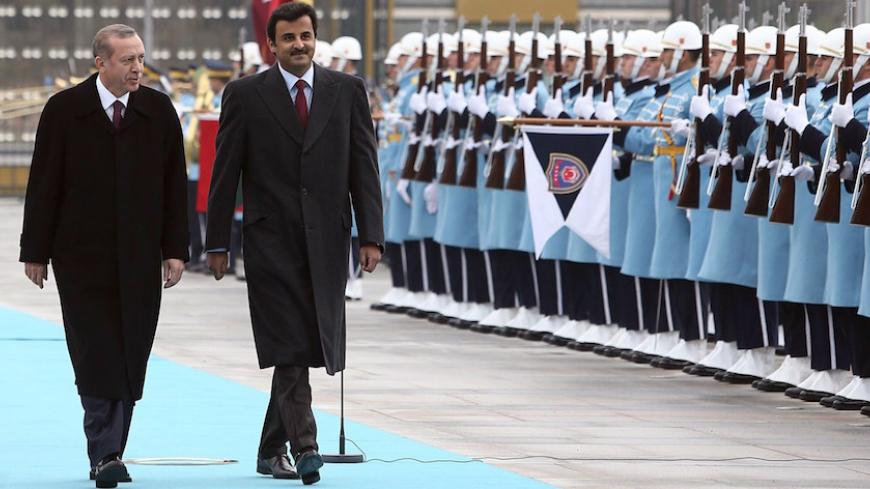 One of the key agenda items during Turkish President Recep Tayyip Erdogan’s July 23-24 visits to Saudi Arabia, Kuwait and Qatar is Turkey’s continued military presence in Qatar. A Saudi-led coalition of Arab countries that cut ties with Qatar in early June is demanding, among a dozen other things, that Turkey close its base there.

Doha and Ankara firmly rejected the demand as “infringement of sovereign rights.” Qatari Emir Tamim bin Hamad Al Thani, in his July 21 address to the nation, praised Turkey’s stand in the Gulf crisis, saying, “We express our gratitude to Turkey for rapidly implementing our cooperation agreement and meeting our basic needs.”

Qatar is suffering under sanctions by Saudi Arabia, the United Arab Emirates (UAE), Bahrain and Egypt, which have restricted Qatar by air, land and sea, charging that the country supports terrorists, which Qatar denies.

In my June 12 Al-Monitor article, “Turkish military will protect Qatari regime if necessary,” I emphasized that for Erdogan, the survival of the Qatari regime and the personal fate of Al Thani — who had given Erdogan the strongest support against a failed military uprising a year ago — are vital matters. This is one reason why Ankara is determined to expand its military-strategic partnership with Qatar.

The number of Turkish soldiers at what is called the “joint tactical division headquarters” in Doha has reached 300. There is a company from the 2nd Commando Brigade, one mechanized infantry company from the 5th Corps and two 155 mm howitzers. It is now a battalion-level task force.

According to security sources speaking to Al-Monitor in Ankara, the Turkish presence in Qatar is expected in 2018 to become a brigade-level task force of about 3,000 strong. The Turkish base will have its own naval port and a runway initially for its drones and then for military flights. It is likely that by the end of 2018, there will be Turkish naval elements patrolling the Gulf and Turkish drones and airborne early warning and control system planes flying reconnaissance over Qatari airspace and the Gulf.

According to military analyst Can Kasapoglu, the deployment of 3,000 Turkish troops will equal nearly one-third of the entire active Qatari military. Thus, within the confines of bilateral agreements between Ankara and Doha, the base could play a major role in Qatar’s defense planning, as well as in the emir’s regional affairs agenda.

“Forward deployments in Qatar are likely to bring more competition and strain to the Turkish-UAE relations. Nevertheless, as long as Ankara can compartmentalize its relations with the GCC [Gulf Cooperation Council], first and foremost with Saudi Arabia, a political dispute with the UAE would be manageable,” Kasapoglu said in a July analysis for the Center for Economics and Foreign Policy Studies.

According to the analysis, currently, Turkey has a military presence in:

It's no secret that Turkey has been discussing potential military bases in Pakistan, Indonesia, Malaysia and Saudi Arabia. Sources in Ankara have acknowledged that discussions with Saudi Arabia about setting up a base there in the Shiite-populated south and another as a naval sea port have been interrupted because of the Qatar crisis. Many wonder if these two projects in Saudi Arabia will come up during Erdogan’s visit there.

Within three years, Turkey plans to complete the Turkish Coast Guard Anadolu amphibious assault ship and light aircraft carrier. The ship is slated to carry up to 10 F-35B jets that the Turkish navy is planning to deploy in 2021, and new additions to the Turkish Armed Forces' inventory of CH-47 multipurpose and T-29 ATAK assault helicopters — along with a fully equipped marine battalion to secure beachheads. The project will be a major force multiplier for Turkey in the Mediterranean and the Black Sea. Many people have also noted Erdogan’s statement that Turkey is among 10 countries that can build warships, and that it is now determined to build its own aircraft carrier.

Between 2006 and 2011, with a foreign policy shaped by then-Prime Minister Ahmet Davutoglu and his team, Turkey acknowledged that its value in world politics was predicated on its geo-strategic location, historical depth and soft power.

In 2016, after Davutoglu gave up his premiership, and security risks grew primarily in Iraq and Syria, a new foreign policy gained prominence: respond effectively, proactively and assertively to security risks and challenges through hard power.

Fuat Keyman, the director of the Istanbul Policy Center think tank and a professor of international relations at Sabanci University, defined this new paradigm as “moral realism."

Turkey's military is pleased to project regional hard power as a replacement to civilian diplomacy and alliance building. Among the military branches, the naval command has overtaken the army and air force in roles and missions in this new paradigm. That may explain the increasing visibility, especially of naval officers, when Turkish officials visit foreign decision-makers.

A more "muscular" foreign policy also has the domestic benefits of repairing the civilian-military relations that were seriously damaged with the July 15 coup attempt and encouraging the two sectors to work together. Other segments that are benefiting considerably are the defense industry and military technology.