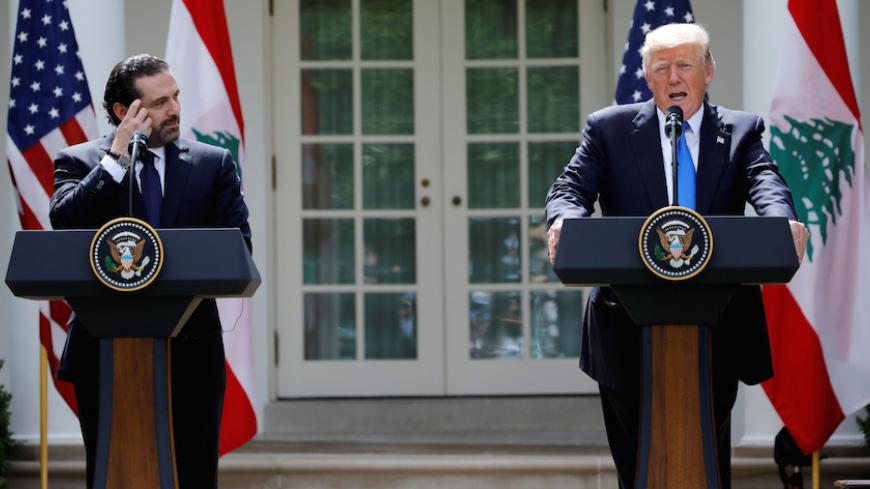 Lebanon is pushing back against US pressure on Hezbollah for fear that efforts from the Donald Trump administration and Congress could destabilize the fragile state.

The Lebanese Armed Forces (LAF) face the prospect of losing all military assistance under the State Department's fiscal year 2018 budget request, while Congress is taking new action to expand sanctions on Hezbollah. The cuts to the Foreign Military Financing (FMF) program would hit the country particularly hard, as the LAF, with the help of Hezbollah, is securing the war-torn Syrian border from the Islamic State (IS), al-Qaeda and other militants.

Lebanese Prime Minister Saad Hariri is in Washington this week to lobby against both threats.

“I will be going to the Congress tomorrow and talking to both parties and I believe that there are already enough sanctions on Lebanon and in the banking sector,” Hariri told Al-Monitor today following his remarks at the Carnegie Endowment for International Peace. “We need to immediately explain to Congress why this is important … and we will do that and I’m confident Congress will hopefully listen to some of the remarks that we’ll have.”

"Though these cuts have been proposed, we understand from our Washington meetings that they are not expected to happen in the case of assistance to the LAF,” a source within Hariri’s delegation told Al-Monitor.

“We explained to them also that Lebanon is a buffer zone and that we are in the front lines of fighting extremism,” Hariri said.

Many members of Congress have traditionally been skeptical of the LAF, arguing that Hezbollah exerts too much influence on Lebanon’s security apparatus. Still, faced with the prospect of a defunct LAF as the Syria war wages on, even hawks balk at eliminating or reducing US funding for the LAF.

“[Lebanon has] a coalition government that’s supporting over a million and a half refugees, and we have an active effort with them in which we’ve armed them and they are fighting [IS] on their border,” Rep. Darrell Issa, R-Calif., a member of the House Foreign Affairs Committee, told Al-Monitor. “So there’s no question that that role and that cooperation has to continue.”

Lebanese observers in Washington expressed confidence that some level of funding will remain in place.

"Based on Lebanese officials, particularly LAF command, their whole survival depends from a logistical, technical capability … on US assistance,” said Joseph Gebeily, the president of the US-based nonprofit Lebanese Information Center, which is critical of Hezbollah. “So it’s very crucial. It’s a substantial program.”

Gebeily said he does not believe that eliminating US funding for the LAF is intentionally designed to cripple Lebanon’s official army. Rather, the cuts are part of Trump’s across-the-board effort to reduce US foreign aid.

“To put it into perspective, it’s not just the Lebanese Armed Forces,” Gebeily said. “I don’t think the administration necessarily meant to defund the LAF.”

The State Department’s budget proposal only preserves FMF for Israel, Egypt, Jordan and Pakistan while eliminating it for everyone else. In addition, the Trump administration seeks to reconfigure FMF grant funding into a loan program.

President Trump himself praised the LAF’s role in counterterrorism operations during a press conference with Hariri on Tuesday, indicating that the United States will continue to provide Lebanon with military assistance.

“America’s assistance can help ensure that the Lebanese army is the only defender Lebanon needs,” Trump said. “It’s a very effective fighting force.”

Despite his stated willingness to preserve military funding for Lebanon, Trump went out of his way to criticize Hezbollah and its chief backer, Iran.

“Hezbollah is a menace to the Lebanese state, the Lebanese people and the entire region,” Trump said while standing beside Hariri. “The group continues to increase its military arsenal, which threatens to start yet another conflict with Israel, constantly fighting them back. With the support of Iran, the organization is also fueling the humanitarian catastrophe in Syria.”

Last week, Congress further expanded its efforts to curb Hezbollah’s influence in Lebanon by introducing new sanctions on the Lebanese political party and armed militia group. The sanctions would expand previous congressional sanctions from 2015 by blocking the assets of any individual or entity that supports Hezbollah or its affiliates. The new legislation also requires the administration to produce a semi-annual report on foreign financial institutions that support the US-designated terrorist group.

The draft legislation was leaked to Lebanese news outlets last April, causing a considerable amount of fear that it could potentially destabilize Lebanon’s financial sector. Foreign Policy reported that Lebanese lawmakers responded by lobbying their US counterparts in Congress against the legislation.

Despite Hariri’s concerns, Gebeily downplayed the risk that the legislation could destabilize Lebanon's banking industry, noting that the impact from the first round of Hezbollah sanctions in 2015 “was really nil.”

“And this is only a continuation, a little bit of an expansion,” Gebeily said. "Because it does mention some other Hezbollah institutions, thus making sure it also covers countries outside Lebanon, not just Lebanon.”

During his Tuesday press conference with Hariri, Trump responded to a question asking for his stance on the sanctions bill by stating that he would make his position “very clear” within the next 24 hours. Trump has still not declared his official stance on the legislation and the White House did not respond to Al-Monitor’s request to clarify Trump’s stance on the congressional sanctions proposal.

Correction: July 27, 2017. An earlier version of this article mistakenly referred to the bill's potential impact on Iran's banking industry instead of Lebanon's.