Israel hopes that by canceling family visits of Hamas prisoners, the organization will be pressured into advancing a prisoner exchange deal. 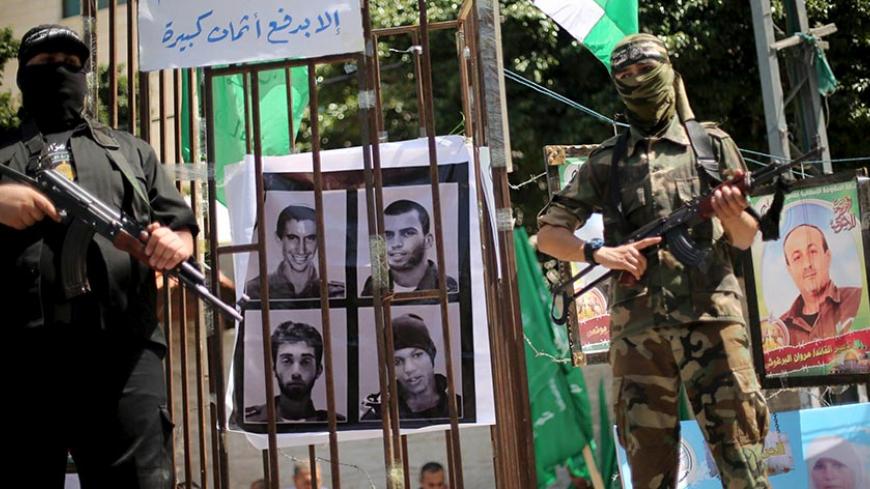 The Hamas government in the Gaza Strip announced June 29 that Israel was denying family visits to Palestinian prisoners held in Israeli jails. A press release by the spokesman from Hamas' prisoners department said, “The aim of this decision is to exert pressure on the Hamas leadership regarding the missing and [captive Israelis in] Gaza and is a surrender to the pressure of the [Israeli] soldiers’ families, who called for the [Hamas] prisoners to be punished.” Leaders of the jailed Hamas prisoners also issued a statement to the media, calling the decision a declaration of war. “We will not allow this decision to stand, whatever the price may be,” the group warned.

The Israel Prison Service has refused to respond to the reports out of the Gaza Strip, but an Israeli security source confirmed that on orders from the political echelon, families from Gaza are no longer allowed to visit their relatives in Israeli jails. The family of Oron Shaul, an Israeli soldier killed in Israel’s Operation Protective Edge in Gaza in 2014, welcomed the decision, saying it was the right way to free their son as soon as possible. Since the end of the 2014 fighting, the Shaul family and that of another soldier killed in action in Gaza, Hadar Goldin, have been demanding that Prime Minister Benjamin Netanyahu make any dealings with Hamas conditional upon the return of the bodies of their sons, including prohibiting family visits.

The two Israeli families met on June 23 with Jason Greenblatt, President Donald Trump’s envoy to the Middle East, for the second time in recent weeks. Following the meeting, the Americans issued a statement of support for the families. Meanwhile, the families said in a statement of their own that the sides had discussed making any humanitarian actions by the international community toward Hamas in Gaza conditional upon the return of the soldiers. The decision suspending family visits followed a week later.

According to data provided by the Hamas prisoners department, the decision affects some 350 prisoners from all the Palestinian factions who are Gaza residents, including 150 Hamas inmates. So far, it remains unclear whether Israel intends to deny visits to Hamas prisoners from the West Bank. An Israeli security source speaking to Al-Monitor on condition of anonymity said he had not ruled out such a move and called the current decision an “initial step” designed to say to Hamas, “There are no free meals.”

The freezing of family visits comes a month after prisoners belonging to Fatah halted a hunger strike led by a top Fatah official, Marwan Barghouti. One of the prisoners’ demands was increasing the number of family visits following a 2016 decision by the Red Cross to reduce them from twice to once a month. Hamas did not take part as an organization in the strike called by Barghouti, but the agreement reached with Israel — reinstating two visits per month — applied to all inmates. The compromise was reached after Palestinian President Mahmoud Abbas committed to obtaining additional funding from the Palestinian Authority’s budget for the families to make the additional visits. (They must be driven back and forth and accompanied to the prison in Israel.)

Official Hamas spokesmen, with the exception of the prisoners’ representatives, have thus far refused to discuss the Israeli move. In response to a query by Al-Monitor, a senior Hamas official said on condition of anonymity that the organization was weighing its next move and at this stage was leaving the protest to the “blessed” families and the Palestinian prisoners’ organizations.

This oblique response, devoid of the type of militant declarations adopted by the prisoners’ leadership, probably derives from Hamas' chief in Gaza, Yahya Sinwar, personally leading the prisoner issue. Sinwar, who was himself jailed in Israel until being freed in a 2011 prisoner exchange for an Israeli soldier held by Hamas, was tasked with responsibility for prisoner issues even before being elected to head the organization in Gaza and assuming office in February 2017. Since then, he is the one who has been blocking progress with Israel regarding the return of the soldiers’ bodies and of Israeli civilians Hamas is holding.

According to the Israeli security source, over the years Sinwar has presented outlandish demands concerning a prisoner exchange deal with Israel, designed to boost his prestige within the organization. Now, says the source, Sinwar will have to sleep in the bed he made.

Israel knows its decision to stop family visits could deteriorate into an armed confrontation with Hamas, one that will start off with rockets fired from Gaza and expand into a full-scale clash that both sides have openly declared in the past they do not want. Nonetheless, Israel also believes that Hamas is currently at one of its lowest points and will not want to risk another confrontation.

Indeed, in recent months, Hamas leaders in Gaza have been under intense pressure and facing growing fury by the territory’s 2 million residents. The electricity crisis and the health services crisis are only part of the reason. Another front, this time with Israel, is probably the last thing Hamas wants.

A Fatah leader in Gaza, formerly one of the top prisoners in Israeli jails, knows Sinwar well from his days imprisoned in the Israeli town of Ashkelon. He told Al-Monitor that Sinwar is under intense pressure by Hamas prisoners’ families, and the Hamas leadership is demanding that he make a decision. Sinwar, who has made the prisoners’ issue a top priority and promised the families to bring about their sons’ release, cannot go back on his word to them or drastically slash the high price he has presented for a deal with Israel.

“How will he look if he gives in now? It will be a surrender and loss of leadership,” said the Palestinian source speaking on condition of anonymity. Knowing Sinwar, he added, the pressure Israel is trying to exert on Hamas could actually result in a harder Hamas line.

Will Hamas try to extricate itself from this bind by instigating a military confrontation with Israel? According to the Palestinian Hamas source, the atmosphere in Gaza feels like war is imminent. “It’s not just the prisoner issue,” he said. “It’s a sense that residents mired in such shameful poverty and horrible suffering have nothing to lose. Death doesn’t scare them at all. Israel is playing with fire.”