The news that five Arab countries have cut ties with Qatar, its close regional ally, has rattled Turkey, which depends on its political, military and business ties with Qatar. 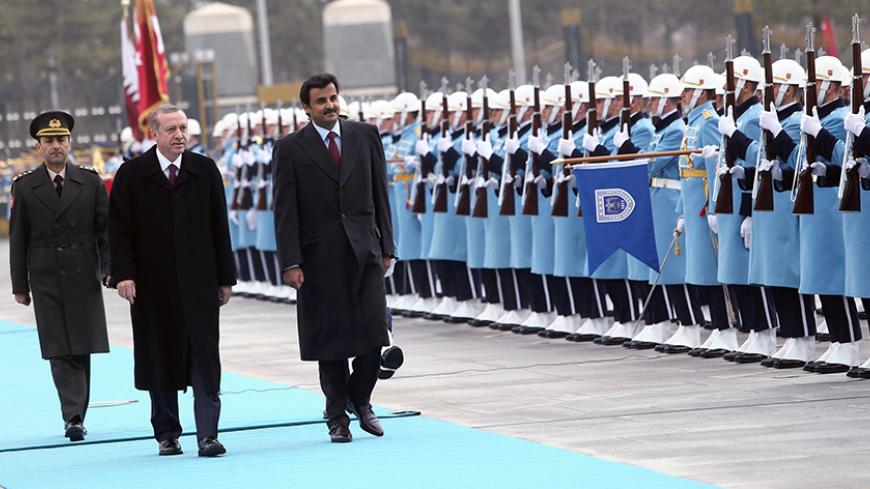 The dramatic decision by five Arab countries to sever ties with Qatar over its alleged coddling of the Muslim Brotherhood and its flirtation with their archenemy Iran has caught the pugnacious emirate’s closest regional ally, Turkey, off balance and wondering whether it too may be targeted.

Turkey’s initial reaction to the announcement by Bahrain, Egypt, Saudi Arabia, the United Arab Emirates (UAE) and Yemen that they were suspending diplomatic ties as well as air and sea travel to and from Qatar was a call for dialogue. Foreign Minister Mevlut Cavusoglu said at a news conference, “We see the stability in the Gulf region as our own unity and solidarity." He went on, "Countries may of course have some issues, but dialogue must continue … for problems to be resolved peacefully. We are saddened by the current picture and will give any support for its normalization.”

Clearly, Qatar’s predicament will have a ripple effect in Turkey. Turkey’s flourishing political, military and business ties with Qatar have been described and analyzed in exhaustive detail by fellow Al-Monitor columnists Metin Gurcan, Mustafa Sonmez and Fehim Tastekin. As Sonmez pointed out, the Turkish construction giants who are driving the Turkish economy are pinning their hopes on winning contracts in Qatar. While relatively small compared to Qatar's investments elsewhere, injections of Qatari money has brought some relief to Turkey’s faltering finances. Qatar has also helped bankroll Turkey’s Sunni Arab rebel proxies in Syria and piggy-backed on Turkey’s geostrategic clout to amplify its own in the region.

But above all, the increasingly conspiratorial and paranoid mindset in Ankara has some worrying that Turkey may somehow be in the line of fire.

A Turkish source with access to the country’s senior leadership who asked to not be identified by name told Al-Monitor, “They see parallels between [former Egyptian President] Mohammed Morsi’s ouster and what’s happening to Qatar now. They see it as part of a concerted campaign orchestrated by Israel and the United States against the Muslim Brotherhood and its allies with whom they feel an ideological affinity and they are connecting the dots to the July 15 coup.”

Turkey’s President Recep Tayyip Erdogan was among the most vocal critics of current Egyptian President Abdel Fattah al-Sisi after the former general ejected and jailed Morsi in 2013. Erdogan called Sisi a “putschist” who had murdered thousands of his own people in an interview with the Qatari news channel Al Jazeera. For Erdogan, Sisi is no different from the Turkish generals who waged an unsuccessful campaign to unseat him. And while he blames the July coup attempt on the Pennsylvania-based Turkish imam Fethullah Gulen, the source said, “Erdogan believes that Gulen could not have acted without America and Israel’s support and that they may try to go after him again, and going after Qatar is like going after Turkey.”

As Erdogan himself frequently acknowledges, Qatar’s Emir Sheikh Tamim bin Hamad Al Thani was the first international leader to call him on the night of the coup. The emir was rumored to have offered the Turkish president an airplane, protection and sanctuary if need be.

The UAE, which is spearheading Qatar’s isolation, has been accused by the pro-government Turkish media of transferring funds to Gulen operatives weeks before the coup attempt. Some of the accusations are based on the hacked emails of the UAE ambassador to Washington, Yousef Al Otaiba.

As of the time of publication, Erdogan had yet to publicly rise to Qatar’s defense. But pro-government accounts on Twitter have already done so in force with the hashtag #TurkeyWithQatar trending in Turkey. Echoing the prevailing mood, an account called @fireoftheturk tweeted a picture of Thani shaking hands with Erdogan captioned, “We are with you [Q]atar, don’t worry” and "Allah too [has] a plan."