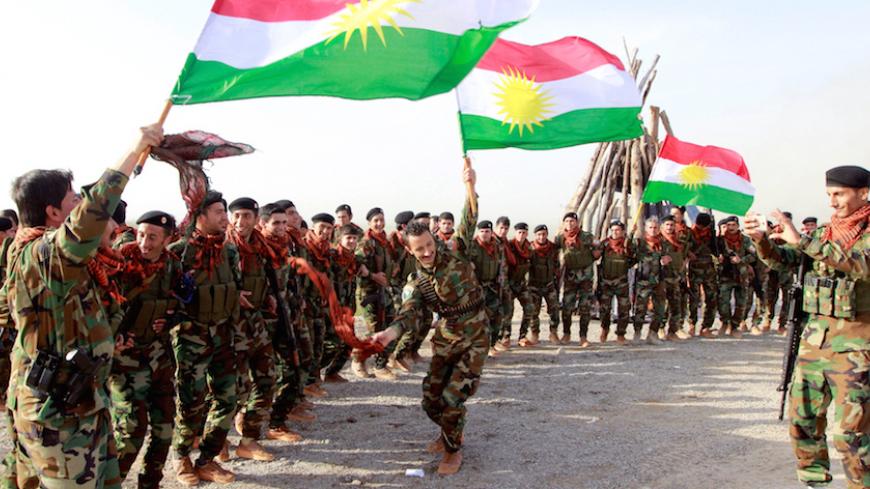 Congress is threatening to cut funding for Iraq’s vaunted Kurdish peshmerga fighters if the Kurdistan Regional Government (KRG) ends up splitting with Baghdad.

The House Armed Services Committee released a draft annual defense bill this week that makes continued funding for the KRG “contingent” upon Erbil’s “participation in the government of a unified Iraq.” This summary language is not legally binding but signals congressional intent to the Donald Trump administration.

“The committee notes that funding provided to the [KRG] is to enhance Government of Iraq-KRG cooperation and support a unified effort to counter the Islamic State of Iraq and the Levant (ISIL),” the draft National Defense Authorization Act reads. “Such funding should be contingent upon KRG participation in the government of a unified Iraq and on their continued good faith cooperation in the anti-ISIL campaign.”

At risk are hundreds of millions of dollars in annual US support for the peshmerga, who have gone without regular paychecks in the midst of the campaign against the Islamic State (IS) as Erbil struggled with a budget shortfall. Congress responded last year by allocating $480 million “in stipends and sustainment” to the peshmerga for the current fiscal year, which ends Sept. 30.

The new congressional language comes as Erbil is gearing up for a long-awaited independence referendum in September.

The KRG representation office in Washington made it clear it took issue with the language, calling it “inartful” and pointing out that the language is nonbinding and may not survive reconciliation with the Senate version of the bill.

“It is the democratic right of the people of Kurdistan to hold a referendum on their future,” an official with the KRG office told Al-Monitor, “and no one that we have met in Congress has denied this fact.”

The KRG office in Washington also emphasized its cooperation with Congress in the campaign to counter IS.

“Members of the US Congress and, in particular, members of the Armed Services and Foreign Relations committees in both houses, have consistently recognized the essential role of the peshmerga in the fight against [IS] and the generosity of the people of Kurdistan in hosting up to 1.8 million displaced Iraqi and Syrian refugees,” the delegation said in a statement to Al-Monitor.

Still, the language is more bad news for the Kurds’ independence bid, said Bilal Wahab, a fellow at the Washington Institute for Near East Policy.

“The KRG wasn’t expecting US support, but they would be happy if the United States would not oppose,” Wahab told Al-Monitor. ”And this language is therefore bad news. It has the hallmarks of opposition.”

Wahab noted that the Trump administration appears to be on the same page as Congress with regard to the referendum. The State Department signaled its opposition in a June 8 statement from spokeswoman Heather Nauert.

“We have expressed our concerns to authorities in the Kurdistan Region that holding a referendum — even this nonbinding resolution — at this time will distract from more urgent priorities: the defeat of [IS], stabilization and the return of the displaced, managing the [Kurdistan] Region’s economic crisis and resolving the [Kurdistan] Region’s internal political disputes,” Nauert said at the time.

Even if the language remains in the final bill, Wahab believes that the Trump administration still has some latitude in how it provides Iraq and the KRG with military assistance for the campaign to counter IS. “It’s up to the executive branch … whether they actually cut funding or not,” he said.

Kirk Sowell, the head of the political intelligence firm Utica Risk Services, predicted that the referendum, should it go forward, will not affect relations with the United States.

“The referendum will have no impact at all, at least in terms of US policy,” Sowell told Al-Monitor. “It is not even certain to happen, but assuming it does, nothing will change afterward. The question is framed like an opinion poll, and there is no legal or institutional structure to turn a ‘yes’ vote into something real. The status quo will continue.”

Kurdish opposition parties have also criticized the referendum on the grounds that it’s nonbinding. But KRG President Massoud Barzani insisted today that it was binding in a Washington Post op-ed while persisting in his calls to move forward.

“When the Islamic State attacked Kurdistan in 2014 — using advanced US weapons abandoned by the Iraqi army in Mosul — the Iraqi government refused to give Kurdistan its constitutionally mandated share of the federal budget or to provide our soldiers … with weapons,” Barzani wrote in the op-ed. “As an independent country, we could have financed and equipped our own troops and brought this fight to a swifter conclusion.”