What are European Union’s plans if Trump fails on Mideast peace?

If US President Donald Trump fails to advance his Middle East conference initiative, the European Union will advance its own initiative for a third Paris conference. 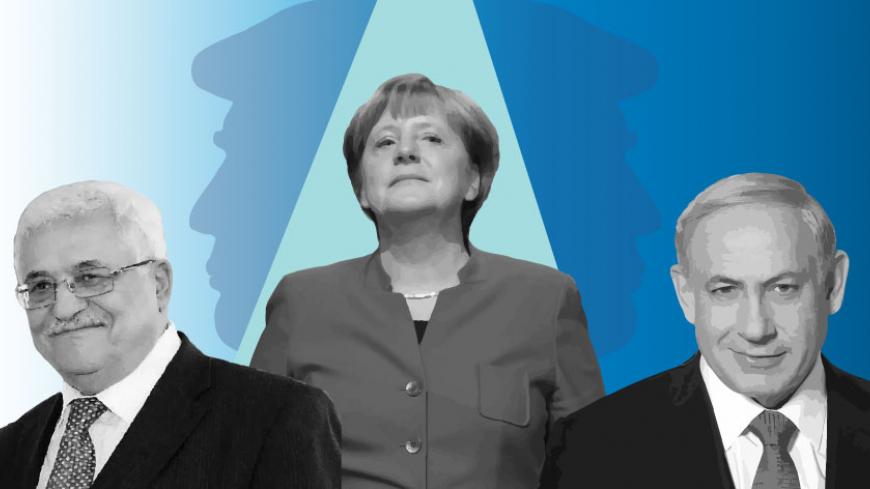 German Chancellor Angela Merkel is furious about Israeli Prime Minister Benjamin Netanyahu’s decision on April 25 not to meet with German Foreign Minister Sigmar Gabriel, following Gabriel’s meeting with left-wing Israeli human rights organizations. According to a senior source close to Federica Mogherini, the European Union high representative for foreign affairs and security policy, the EU heard extremely harsh criticism in that line from the chancellor’s office in Berlin. Netanyahu’s move is seen, both in Brussels and Berlin, as a slap in the face of the European leadership and as a signal that Israel rejects European involvement in any further US-led peace initiatives.

The official told Al-Monitor on condition of anonymity that since Donald Trump was elected as the 45th US president, Netanyahu has turned more combative than ever before. “He is directly opposed — in rhetoric and in deed — to a two-state solution,” said the source. “Despite the relative calm in the West Bank and Gaza, the EU sees the situation as extremely unstable. The Israeli settlement construction restraint is a hoax. On the Palestinian side, there are increasingly more militant voices in Fatah for a possible uprising.”

According to this official, given that June 2017 marks 50 years since the occupation began, it could become a month of violence. Such a violence surge will probably take the form of more terror attacks, rather than a new intifada, leading to cycles of violence throughout this summer.

The EU official said that Mogherini is in frequent contact on Middle East issues with US Secretary of State Rex Tillerson. She estimates, he added, that Trump will talk about the principles of his Middle East policy while visiting Brussels for the NATO summit on May 25. But the administration may prefer reaching out to the EU on the anti-Islamic State coalition, rather than including the Europeans in the possible regional peace initiative.

In any case, on the Israeli-Palestinian issue, the assessment in Brussels is that Trump’s rhetoric will be very pro-Israel, even on the Jerusalem issue. While the US president will visit Saudi Arabia, his team is considering the possibility of also meeting with Palestinian President Mahmoud Abbas and King Abdullah of Jordan during his trip to the region. The United States, like the EU, is apparently aware of the viewpoint espoused by pragmatic Arab countries, by which the 2002 Arab Peace Initiative is vital for any Israeli-Palestinian peace process. Trump, according to the Brussels official, may surprise people by taking a more favorable attitude toward a two-state solution.

The EU expects Washington to initiate a regional peace conference on the Israeli-Palestinian issue and on the war on terror, yet Brussels does not believe that the administration will involve the leaders of Europe in such a conference.

The EU official stressed that even if this is the case, the European leadership will not leave the Israeli-Palestinian diplomatic field solely to the United States. The EU will inform Washington that it will support an American initiative for a two-state solution, but should the conference not take place, or turn out to be merely a photo opportunity, Brussels will coordinate with Berlin and Paris on the renewal of the Paris conference (or in any other EU member capital) and the monitoring of Security Council Resolution 2334 implementation on the illegality of settlement construction.

A senior PLO official close to Abbas told Al-Monitor that despite improved coordination between Abbas and Trump on a possible regional initiative based on the Arab Peace Initiative, Ramallah is simultaneously coordinating future initiatives with Brussels. The PLO representative in Paris has been in close contact with leading French presidential candidate Emmanuel Macron’s foreign policy team and is encouraged by a seemingly pro-two-state solution and anti-settlement policy.

In fact, the Palestinian leadership would welcome another Paris peace conference in 2017. The weeks to come seem to be the last window of opportunity for diplomacy. A senior Ministry of Foreign Affairs official with access to Netanyahu told Al-Monitor on condition of anonymity that Netanyahu is optimistic about the outcome of the Trump visit. “We are not taking anything for granted, we have been reassured of President Trump’s full support of Israel, and that nothing will be imposed on the Israeli government.”