The decision by Prime Minister Benjamin Netanyahu to limit settlement construction is an attempt to make President Donald Trump think that any failure to reach a peace deal is the Palestinians' fault. 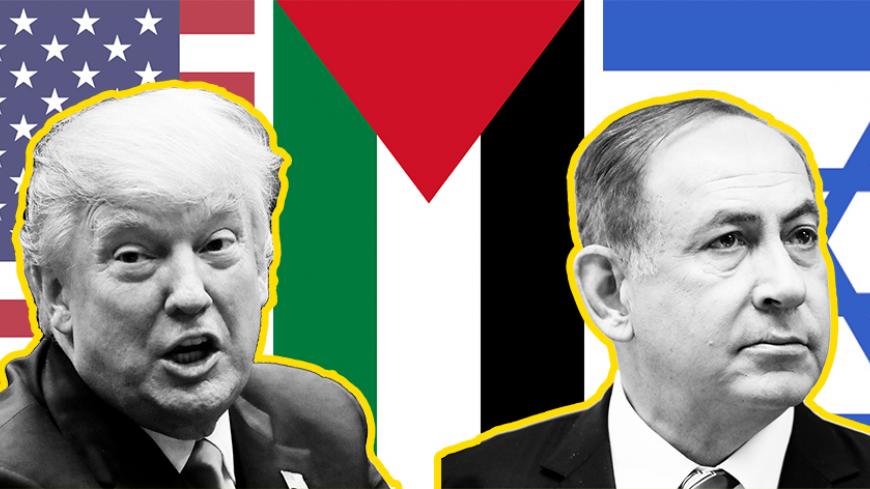 In an attempt to keep US President Donald Trump on his side, Prime Minister Benjamin Netanyahu is limiting settlement construction. - Hugo Goodridge/Al-Monitor

It took Naftali Bennett, HaBayit HaYehudi chairman and right-wing icon of Prime Minister Benjamin Netanyahu’s government, almost three days before he issued his first hint of criticism about the decision to rein in construction in the settlements. On the evening of April 2, he tweeted, “This was a missed strategic opportunity. Instead of laying out alternatives … we were passive.”

Bennett was referring to what took place March 30, when the Diplomatic-Security Cabinet convened for an urgent meeting. It was close to midnight when the Cabinet made public its decision to establish a new West Bank settlement for the settlers evacuated from the Amona outpost. The decision made it into the weekend newspapers just before deadlines and was of historical significance: It will be the first new settlement established in 20 years.

It was at 2 a.m., after the newspapers had closed, when another decision was made public: Construction in the settlements would be curbed, according to an outline drawn up by Netanyahu himself. New construction would be limited to built-up borders of existing settlements or adjacent to them. Netanyahu had requested the support of the ministers for the restriction, and the Cabinet authorized it unanimously. Even Bennett agreed, as did his fellow party member and justice minister, Ayelet Shaked.

No, the decision is not the result of an agreement with the US administration. No such agreement has yet been reached. Contacts through President Donald Trump’s people have not borne fruit, and the distances between the sides are not negligible. Anyone on the Israeli right who thought that Trump’s election signaled the onset of the Messianic era was simply wrong. Thus, to pave the way for the establishment of a new settlement for the Amona evacuees, Netanyahu “volunteered” to declare a curtailment of construction in the outline he made public.

Netanyahu had explained to the ministers that this was Trump’s request, a request that ought to be fulfilled. According to an Israeli diplomatic source, wind of something Trump had said had reached Israel. When Trump's associates asked him what he would do if the Israelis and Palestinians failed to reach a peace deal, Trump said, according to the source, “Then I’ll do what I understand should be done.” Netanyahu doesn’t really want to find out the hard way what the president understands should be done. This strange turn of events, in which Israel’s most extreme right-wing government offers to limit West Bank settlement construction, is the tip of a giant iceberg of important events taking place under the radar.

The bottom line is that Netanyahu clearly knows how challenging the coming year will be. It might be even more difficult than the bad old days he spent dueling with President Barack Obama. He knows that Trump is determined to deliver the “ultimate deal.” While Netanyahu officially expressed his support for a two-state solution in his famous 2009 Bar Ilan speech, he has no real faith in the process or any desire to carry out significant concessions to achieve that goal. Netanyahu would be willing to gamble all his pension money on zero chances for achieving an agreement between Israel and the Palestinians. Therefore, Netanyahu’s game is to orchestrate the events of the coming year in such a way that the blowing up of diplomatic contacts between Israel and the Palestinians, and the sooner-or-later diplomatic dead end, will be the obvious fault of the Palestinians, not Israel. That is the whole story in a nutshell. Netanyahu knows he has no other option, assuming he will still be in power when it happens.

Netanyahu has identified two basic problems in the Trump era that need to be addressed: The first is that, as opposed to Obama, who needed to be pushed into advancing a diplomatic process, Trump is the pusher. Obama was spurred into a process against his will by top advisers, including Rahm Emanuel and George Mitchell in his first term and by former Secretary of State John Kerry in his second term. Trump, however, is self-driven. He is the driving force behind the energies of his international negotiations representative, Jason Greenblatt. The new American president is full of motivation with everything connected to the Middle East and truly wants to put an end to the conflict, proving to the whole world that he is the ultimate “deal maker.”

This problem leads to the second problem: With Obama, Netanyahu could say, “No thank you,” and remain alive. Both times that the peace process fell through under Obama, he registered disappointment and simply cut contact. It was only in his last days as president that Obama pushed the UN Security Council to adopt Resolution 2334, reaffirming the illegality of the settlements. If Netanyahu would have known that that would be the only price he would have to pay for running wild for almost a decade, he would have grabbed the deal with both hands.

Trump, as opposed to Obama, does not live in the orderly world of checks and balances that usually govern American presidents with everything connected to Israel. Instead, the new president does what he feels like. He is not beholden to the American Israel Public Affairs Committee. He does not fear the Jewish lobby. He is not susceptible to the sophisticated restraint systems that Israel created for American presidents in recent decades.

Trump is unpredictable and aggressive, and Netanyahu will go to great lengths to placate him. Netanyahu wants to make sure that Israel won’t be blamed for the inevitable dead end of any negotiations or explosion of the entire process. That is why the Cabinet hurried to close ranks with Netanyahu. First and foremost, a gesture of goodwill toward the president was in order.

There is, however, a third problem. Netanyahu basically used two tactics in the Obama era: Wear them down and deny everything. At the time, Netanyahu was involved in multiple diplomatic contacts, sometimes even simultaneously — for example, the secret London channel, the Kerry channel, the settlement construction freeze during the Mitchell-Hillary Clinton era. In all of them, Netanyahu retained some wiggle room through surefire denial. The Americans backed him up. Clinton can surely testify to the wear-them-down approach, as can Kerry. Netanyahu haggled over every inch of land, disputed every comma. He took his English-English dictionary to the discussions to examine the essence of every term in the most precise way. Netanyahu would agree and then retract his agreement; he would ponder and deliberate, weighing the pros and cons of every idea, and then change his mind. In short, he made the Americans sorry they had ever been born.

“All that is not possible in the Trump era,” a highly placed Israeli Cabinet minister told Al-Monitor on the condition of anonymity. “That is clear to Netanyahu, and it’s also clear to us. The president’s patience is limited, he wants to see results, he responds to events quickly and in unexpected ways. We all share a gloomy feeling that soon we’ll come to miss Obama.”