Expect US-Turkey tensions to rise after the Turkish air force attacked Kurdish militants in Iraq’s Sinjar region and northeastern Syria just as the US-led coalition presses its offensive against IS in Raqqa. 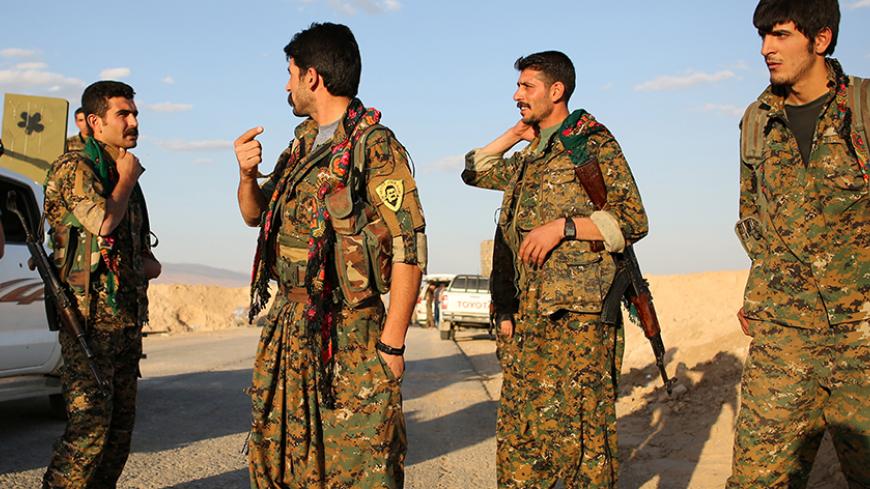 Members of the Sinjar Resistance Units, a militia affiliated with the Kurdistan Workers Party, stand in the village of Umm al-Dhiban, northern Iraq, April 29, 2016. - REUTERS/Goran Tomasevic

Tensions between Turkey and the United States are poised to escalate after the Turkish air force carried out a series of pre-dawn strikes against Kurdish militants in Iraq’s Sinjar region and northeastern Syria, killing foes and friends alike, with potentially disruptive effects on the war against the Islamic State.

Five peshmerga fighters attached to the Kurdistan Regional Government (KRG), Turkey’s closest regional ally, perished in the airstrikes on Mount Sinjar. At least 20 fighters from the Syrian Kurdish People’s Protection Units (YPG), the US-led coalition’s top ally in the fight against the jihadis in Syria, were killed when Turkish jets hit their headquarters in Mount Qarachok near the town of al-Malikiyah, known as Derik in Kurdish. A building housing a local radio station was also destroyed in the attack.

The strikes come at an especially critical moment, as the US-led coalition presses its offensive against IS in Raqqa.

Officials from the US-led coalition familiar with the details of the strikes said Turkish officials had informed the United States of its plans before they were executed. The officials told Al-Monitor on strict condition that they not be identified that Turkey had sought to coordinate the strikes with the Qatar-based Combined Air Operations Center (CAOC), which controls and commands the air campaigns in Syria and Iraq, among others, with US allies. According to one of the officials, “CAOC turned them down.” Turkey went ahead with the strikes anyway.

A Central Command spokesman responding to Al-Monitor’s queries via email said, “The Coalition is aware of the Turkish airstrikes in northern Iraq and Syria. As we've said in the past, all of Iraq’s neighbors need to respect Iraqi sovereignty and territorial integrity. We encourage all forces to remain focused on the greatest threat to regional and worldwide peace and security and concentrate their efforts on [IS] and not toward objectives that may cause the Coalition to divert energy and resources away from the defeat of [IS] in Iraq and Syria.”

A Syrian Kurdish official told Al-Monitor on condition of anonymity an unspecified number of US special forces had been “uncomfortably close” to Qarachok when the Turkish jets struck.

A coalition official corroborated this version but declined to elaborate. This suggests that Turkey may have not properly implemented de-confliction measures agreed with the coalition designed to allow allied forces ample time to move out of harm’s way. The peshmerga casualties in Sinjar also point to flawed intelligence on the Turkish side.

A commander with the YPG-led Syrian Defense Forces blamed US President Donald Trump for the Turkish attacks. “If Trump had not telephoned [Turkish President Recep Tayyip] Erdogan and congratulated him and then invited him to Washington, Turkey would have never felt emboldened to behave in a manner that hurts us and hurts the US fight against [IS],” the SDF commander said in an interview via WhatsApp.

The commander was referring to the April 17 phone call Trump made to Turkey’s president to congratulate him a day after he narrowly won a referendum giving him unprecedented powers that his critics say amount to one-man rule.

Many administration officials including Secretary of State Rex Tillerson, who was in the room with Trump during the exchange, are said to have been opposed to giving the Turkish leader carte blanche, especially since international monitors said it was riddled with irregularities. The consensus among administration officials was that Erodgan’s burning desire for a US stamp of approval legitimizing this contested outcome could have been leveraged for pledges of greater cooperation, notably in Syria. The opportunity was squandered and Erdogan is due to be received by Trump in Washington on May 16.

After today’s strikes the mood is even darker and there is strong pressure on the White House from the administration and Syrian Kurdish officials for a public denunciation of Turkey’s actions. “The United States must take a clear stand against Turkish aggression,” said Ilham Ahmed, the co-chair of the Democratic Syrian Council. “We are fighting against [IS] with the United States and Turkey is hitting us from behind, giving [IS] more oxygen,” she fumed in a telephone interview with Al-Monitor. “We demand that the United States establish a no-fly zone to protect us against further aggression.”

In a show of solidarity, US forces based in northern Syria inspected the fallout in Qarachok. But it will not be enough to appease Kurdish worries over further Turkish attacks.

The Turkish General Staff justified its actions in a statement today, saying they were intended to prevent members of the Kurdistan Workers Party (PKK) from funneling “terrorists, arms, ammunition and explosives to Turkey.” The PKK has been waging a bloody insurgency for Kurdish self-rule inside Turkey since 1984 and is closely linked with the YPG, which reveres imprisoned PKK founder Abdullah Ocalan as its leader as well. Turkey sees no difference between the two groups, labeling both terrorists and demanding that the United States ditch its alliance with the YPG.

The United States has tried to maintain a precarious juggling act of humoring Turkey, a critical NATO ally and home to the Incirlik Air Base vital to US operations throughout the region, while maintaining its military partnership with the Syrian Kurds.

Washington justifies its position on the grounds that although the PKK is on its list of terrorist organizations, the YPG is not. The United States is thus able to continue to arm and train YPG fighters while providing Turkey with real-time intelligence on the PKK. Turkey says it’s had enough of US duplicity as it sees it and has been threatening to take matters into its own hands.

Nicholas A Heras, a senior fellow at the Center for a New American Security, described Turkish thinking to Al-Monitor: "The Turkish military, like the Americans, has decided that it will aggressively target what it views to be the lines of supply and reinforcement for the PKK between eastern Turkey, Syria and Iraq. Derik in Syria has been long viewed by the Turkish military as a key refuge city for the PKK network, and Sinjar and its surrounding area a forward operating base for the PKK to target the Turkish forces deployed or soon to be deployed in northwest Iraq around Mosul.”

Heras added, “The Turkish military is sending the message that its war against the PKK does not stop at Turkey's borders, and that there will be no refuge for the PKK anywhere.”

Turkey is also worried about Iran’s growing influence in Iraq and Syria and insists that the PKK and Shiite militias are acting in concert to cement this. These concerns are shared by the KRG and particularly by Massoud Barzani, the president of the Iraqi Kurdistan Region and leader of the Kurdistan Democratic Party, and were reflected in the KRG’s statement on the airstrikes. It called the airstrikes “painful and unacceptable” but much of its ire was focused on the PKK, calling the attacks a result of its presence in Sinjar. “The PKK has been problematic for the people of the Kurdistan Region and, despite broad calls to withdraw, refuses to leave Sinjar,” the statement read. The PKK and its Yazidi affiliates have controlled parts of Sinjar ever since the PKK and YPG fighters intervened to rescue thousands of Yazidis facing imminent slaughter by IS in August 2014.

Barzani enjoys unusually warm ties with Erdogan and is said to have urged his supporters in Turkey to vote in favor of the referendum.

Turkey’s strongman gave the KRG’s moves toward independence one of its biggest boosts when he allowed the Iraqi Kurds to export their oil independently of Baghdad via a pipeline running to export terminals on Turkey’s Mediterranean coast.

The move further soured relations between Turkey and the central government in Baghdad. These dipped to an all-time low when Turkey moved hundreds of its special forces to a base near the town of Bashiqa northwest of Mosul in December 2015.

Turkey insists that its men are there to train Sunni Arab fighters taking part in the battle for Mosul and to defend Sunni Turkmens in the IS-held town of Tal Afar from possible retaliatory attacks by Shiite militias. But the main reason for their presence, Turkish officials acknowledge, is to scuttle Iran and the PKK’s alleged plans to establish a corridor running from the PKK’s bases straddling the Iran-Iraq border via Sinjar and all the way onto Syria’s Mediterranean coast.

None of this washes with Iraq’s embattled Prime Minister Haider al-Abadi, who is being accused of weakness in the face of Iraq’s erstwhile Ottoman potentates.

Abbas Kadhim, a senior policy fellow at the School of Advanced International Studies at Johns Hopkins University, told Al-Monitor, “Turkish-Iraq relations have witnessed great tension since the IS capture of Mosul. The Turkish troops in Bashiqa, the IS fighters' passage through Turkey, Turkey's hosting of several anti-Iraqi government events and the continued hostile statements by Turkish officials toward Iraq have pushed the bilateral relations to high levels of tension.”

In the wake of today’s strikes, “Abadi will be in a very hard position and will have to show that he cannot tolerate this continued Turkish hostility,” Kadhim noted. “He tried several times to reconcile with Turkey, but every new hostility opens old and new cases and makes his task harder.”