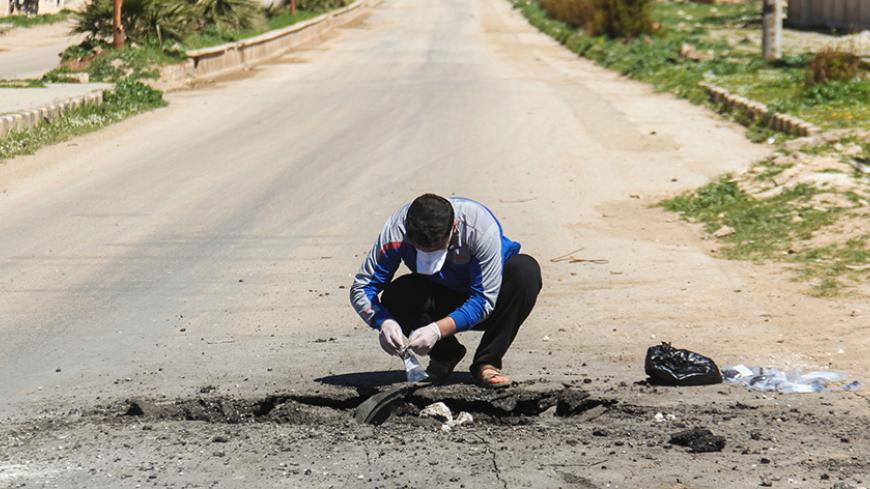 WASHINGTON — Privately, Russian officials are furious with Syrian President Bashar al-Assad for a suspected April 4 chemical weapons attack in Idlib province that killed over 80 people, Russia analysts said. They see it as threatening to sabotage the potential for US-Russia rapprochement ahead of US Secretary of State Rex Tillerson’s first visit to Moscow this week.

But Russia is also confused by what it perceives as contradictory statements from various top Trump Cabinet officials on whether US policy is shifting to demand Assad’s ouster, to what degree does the United States think Russia is culpable for Assad’s behavior, and more broadly, who from the administration speaks for Donald Trump, they said.

“Assad committed suicide here,” Michael Kofman, a Russia military expert with the Kennan Institute, told Al-Monitor in an interview April 10. Russia “will never forgive him for this.”

The suspected April 4 nerve gas attack on rebel-held Khan Sheikhoun that killed over 80 people, many of them children, “is a complete disaster” for Russia, Kofman said. “It destroyed the legacy of the 2013 deal [to remove Syria’s chemical weapons] that both countries [the United States and Russia] certified. So it made liars of both of us.”

He noted, “It provided all the ammunition to sabotage rapprochement between the United States and Russia. Look at the atmospherics. It caused public embarrassment. [Russian President Vladimir] Putin has to swallow US cruise missile strikes. Notice he has not defended Assad. It looks bad for Russia.”

Kofman added, “It demonstrates … in terms of Putin being a power broker … that the Russian role is very aspirational. It prevented him from doing this.”

“The Russians weren’t happy about what happened,” Nikolas Gvosdev, a Russia expert and professor at the US Naval War College, told Al-Monitor, referring to the April 4 chemical weapons attack. “They don’t like unpredictability … when things happen that throw what they are planning off course.”

“The Russians don’t like to be surprised,” Gvosdev added. “They don’t like … [to be made to] look like they can’t enforce agreements or don’t have as much influence over Assad as they were suggesting.”

Trump discussed Syria during a phone call with British Prime Minister Theresa May on April 10, and according to the British readout, the two leaders said they saw an opportunity to press Russia to break its alliance with Assad.

May and Trump “agreed that a window of opportunity now exists in which to persuade Russia that its alliance with Assad is no longer in its strategic interest,” a Downing Street spokesman said in a press release.

While US officials have said the US cruise missile strikes on the Shayrat air base on April 6 were to punish and deter Syria’s use of chemical weapons, there has been some confusion caused by statements from different Trump Cabinet officials on whether US policy is creeping toward regime change. US officials, including US Ambassador to the United Nations Nikki Haley and national security adviser H.R. McMaster, have also suggested Russia was either complicit or incompetent for Assad’s chemical weapons attack. They have expressed anger that Russia has, in their opinion, tried to publicly sow disinformation about it.

“You know the interesting thing, Chuck, is when this chemical weapons murder happened to so many people, Russia’s reaction was not ‘oh how horrible’ or ‘how could they do this to innocent children’ or ‘how awful is that,’” Haley told Chuck Todd of NBC's "Meet the Press" on April 9. “Their initial reaction was Assad didn't do it, the Syrian government didn't do it.”

“Why were they that defensive that quick?” Haley continued. “The first priority for them was to cover for Assad. So what we knew from intelligence, that the Syrian regime had done this again, as they had done so many times before. We had evidence they had done it. It's obviously classified, so I’m not the one that would release the information, but it was enough that the president knew.”

Even while pressuring Russia because of its diplomatic and military support to Assad, McMaster reiterated that the United States is still looking for a political resolution to end Syria’s civil war.

“What we really need to do, and what everyone who's involved in this conflict needs to do, is to do everything they can to resolve this civil war,” McMaster told Fox News Sunday’s Chris Wallace April 9.

“What’s required is some kind of a political solution to that very complex problem, and … it's very difficult to understand how a political solution could result from the continuation [of] the Assad regime,” McMaster said. “Now we’re not saying that we are the ones who are going to affect that change. What we are saying is, other countries have to ask themselves some hard questions. Russia should ask themselves, what are we doing here? Why are we supporting this murderous regime that is committing mass murder of its own population and using the most heinous weapons available?”

Tillerson, who is scheduled to meet with his Russian counterpart, Foreign Minister Sergey Lavrov, in Moscow April 12, expressed disappointment at Russia’s public criticism of the US airstrikes, but he said he did not conclude Russia was complicit in the Syrian regime’s suspected chemical weapons attack.

“I’m not seeing any hard evidence that connects the Russians directly to the planning or execution of this particular chemical weapons attack, and indeed, that’s why we’ve been trying to be very clear that the Russians were never targeted in this strike,” Tillerson told George Stephanopoulos of ABC's "This Week" on April 9.

“Why Russia has not been able to achieve that [removal of Syria’s residual chemical weapons] is unclear to me,” Tillerson said. “I don’t draw conclusions of complicity at all; but clearly, they’ve been incompetent, and perhaps they’ve just simply been outmaneuvered by the Syrians.”

But Tillerson said he still holds out hope for productive talks with the Russians when he travels there this week, and he hopes Russia can press Assad to never use chemical weapons again.

“I’m hopeful that we can have constructive talks with the Russian government, with Foreign Minister Lavrov, and have Russia be supportive of a process that will lead to a stable Syria,” Tillerson said. “Clearly, they … have the greatest influence on Bashar al-Assad and certainly his decisions to use chemical weapons. They should have the greatest influence on him to cause him to no longer use those. I hope that Russia is thinking carefully about its continued alliance with Bashar al-Assad, because every time one of these horrific attacks occurs, it draws Russia closer in to some level of responsibility.”

The changing US calculus on Assad and Russia is making it harder to see what Russia and the United States would be negotiating when Tillerson meets Lavrov April 12, Gvosdev said.

“The ask and the give are harder to ascertain,” Gvosdev said. “Two weeks ago, it was how do we move this [Syria] political process along.”

But now Tillerson is likely to tell the Russians that domestic politics in the United States is playing a bigger role in this, and “I can offer you less upfront,” Gvosdev speculated. “At a time when the Russian establishment very much … wants certain things upfront.”

“We are no longer talking about sanctions relief, [but how to] prevent new sanctions from being imposed,” Gvosdev said.

Assad’s actions have upended what was an important foreign policy priority for Putin — exploring the potential for cooperation with the United States on Syria and a possible rapprochement — and have seemingly taken sanctions relief off the table for discussion for now, and Russia will not forgive him, Kofman said.

“They are furious; it is very clear,” Kofman said, noting that there has been “no actual statement from Putin in support of Assad.”

“That is why I am saying he has signed his own political death warrant,” Kofman said of Assad. “They [the Russians] will never forgive him. They will wait. The time will come when Syria is stabilized, and they can actually have a change of power at the top. And then come for him.”