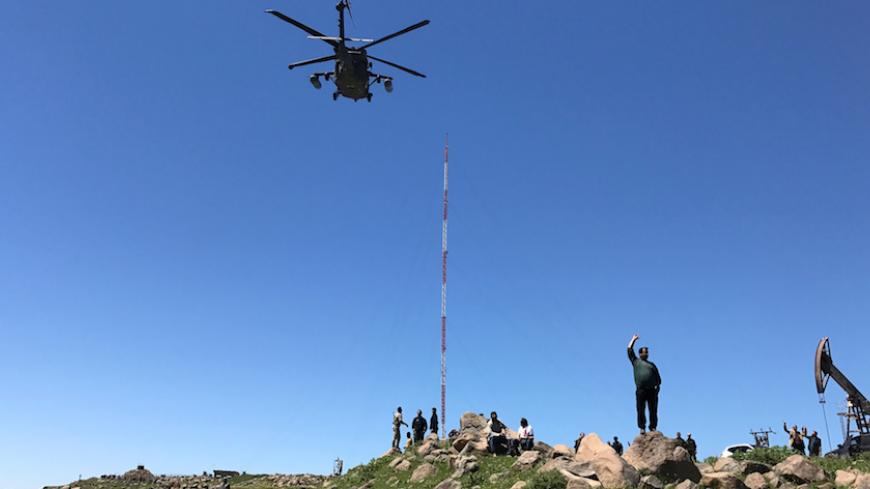 A helicopter carrying US military officials arrives at the headquarters of the Kurdish fighters from the People's Protection Units that was hit by Turkish airstrikes at Mount Karachok near al-Malikiya, Syria, April 25, 2017. - REUTERS/Rodi Said

Will US rethink plans for Raqqa?

In May 2016, we asked how long the United States and Turkey could keep up appearances of alliance and partnership in Syria, given differences over US backing for the Syrian Kurdish People's Protection Units (YPG).

Following Turkey’s airstrikes April 25 against the YPG in northern Syria and the Kurdistan Workers Party (PKK) in the Sinjar region of Iraq, reality may be outpacing appearances.

A Pentagon spokesman said that the Combined Air Operations Center received less than one-hour notice of the strikes, “certainly not coordination as you would expect from a partner and an ally in the fight against [the Islamic State].” The Turkish strikes killed 20 YPG fighters in Syria and, inadvertently, five or six Iraqi peshmerga fighters in the Kurdistan Region of Iraq. The Iraqi peshmerga are linked to the Kurdistan Regional Government of Iraq, which has close ties to Ankara.

Metin Gurcan writes, “Ankara’s undeclared intention appears to be creating situations on the ground to probe the intentions and seriousness of the United States in cooperating with PKK-linked Kurdish armed groups in northern Syria and Iraq. Ankara wanted to test the waters with the United States in the lead-up to the much-awaited May 16 meeting scheduled between Presidents Donald Trump and Recep Tayyip Erdogan. Turkey will decide what it wants from that meeting based on the United States' reaction to Turkey's air attacks.”

Amberin Zaman suggests that Erdogan may have been emboldened by his April 17 call with Trump. “Many administration officials, including Secretary of State Rex Tillerson, who was in the room with Trump during the exchange, are said to have been opposed to giving the Turkish leader carte blanche, especially since international monitors said it was riddled with irregularities,” Zaman writes. “The consensus among administration officials was that Erdogan’s burning desire for a US stamp of approval legitimizing this contested outcome could have been leveraged for pledges of greater cooperation, notably in Syria. The opportunity was squandered and Erdogan is due to be received by Trump in Washington on May 16. After today’s [April 25] strikes the mood is even darker and there is strong pressure on the White House from the administration and Syrian Kurdish officials for a public denunciation of Turkey’s actions.”

Syrian Kurds are proposing a no-fly zone, although this would likely further complicate US operations in Syria, and US-Turkey relations more broadly. Zaman continues, “In a show of solidarity, US forces based in northern Syria inspected the fallout in Karachok. But it will not be enough to appease Kurdish worries over further Turkish attacks. … The United States has tried to maintain a precarious juggling act of humoring Turkey, a critical NATO ally and home to the Incirlik Air Base vital to US operations throughout the region, while maintaining its military partnership with the Syrian Kurds. Washington justifies its position on the grounds that although the PKK is on its list of terrorist organizations, the YPG is not. The United States is thus able to continue to arm and train YPG fighters while providing Turkey with real-time intelligence on the PKK. Turkey says it’s had enough of US duplicity as it sees it and has been threatening to take matters into its own hands.”

The United States is now out on a limb as Turkey, a NATO ally, is almost daring the United States to continue its reliance on the Syrian Democratic Forces (SDF), whose most effective fighters are drawn primarily from the YPG, in the long-anticipated military campaign to expel IS from Raqqa.

In partnering with the YPG, the Pentagon is not intentionally picking sides in Turkey’s seemingly endless conflict with the PKK, which both Washington and Ankara consider a terrorist organization. Barbara Slavin reports that despite Turkish opposition to the YPG, Lt. Gen. Terry Wolff, the deputy special presidential envoy for the Global Coalition to Counter ISIL, “made clear that no other force has emerged on a timeline commensurate with the US desire to retake Raqqa and end its role as a hub for plotting terrorist attacks in Europe and the United States.”

By contrast, the Turkish proxy forces, which Fehim Tastekin memorably assessed as an “armed hordes that open fire haphazardly and are ill-disciplined, untrained and inexperienced,” most prominently include the extreme Salafi Ahrar al-Sham group, an on-again, off-again ally of Jabhat Fatah al-Sham, formerly known as Jabhat al-Nusra, al-Qaeda’s Syria affiliate.

The least worst scenario may ultimately depend on Moscow’s good offices with Damascus. As Zaman wrote last month, “While the United States would never want to cooperate directly with the regime, any help it can get on Raqqa would clearly not be unwelcome. And as recent developments in Manbij have shown, with Russia pulling the strings, the SDF and the regime are capable of working together when need be. It may not be all that bad an outcome for Turkey, either, for the alternative, a deeper US footprint in alliance with the Kurds, is viewed by Ankara as the biggest threat of all.”

Anton Mardasov explains that “Russia’s military presence in Syria goes beyond Khmeimim air base and Tartus naval base.“

Mardasov provides details of an expansive, and growing, military presence. He writes, “Russia’s activity at the Kuweires air base in Aleppo, recaptured by Syria's army in November 2015 and fully reopened in March 2017, stays under the radar. In early January 2016, rumors about increased Russian military presence at the airport and deployment of air defense forces started to circulate. Those reports were substantiated in July 2016. When comparing satellite pictures of different years, analysts saw both the prepared ground for installing S-200 launchers and their deployment in the northwestern part of the airport.”

“The presence of Russian artillery units, special operations forces, military police and fighters from the private Wagner military group in other provinces does not imply that they are constantly based in an area,” Mardasov explains. “Russian military experts engage in combat for tactical purposes, and in most cases they train recruits and retrain the soldiers of the fifth corps of the Syrian army. They also deliver humanitarian aid and negotiate with the opposition. Al-Monitor has been informed that since the conflict between the pro-government Syrian forces and the Kurds erupted in August 2016, the Russian military has been acting as peacekeepers. Since then, Moscow has maintained a reconnaissance mission in Qamishli. The Russian Aerospace Defense Forces and their effectiveness are extensively covered in the media, but helicopter activity at Kuweires, Shayrat and Tiyas air bases remains obscure. The tasks carried out by helicopter units include protection of the Khmeimim military base and support of Russian troops and Syrian pro-government forces as they combat Islamic State (IS) militants.”