Turkish President Recep Tayyip Erdogan sent a message of support to an Armenian genocide commemoration in Istanbul in a radical departure from previous government policy. 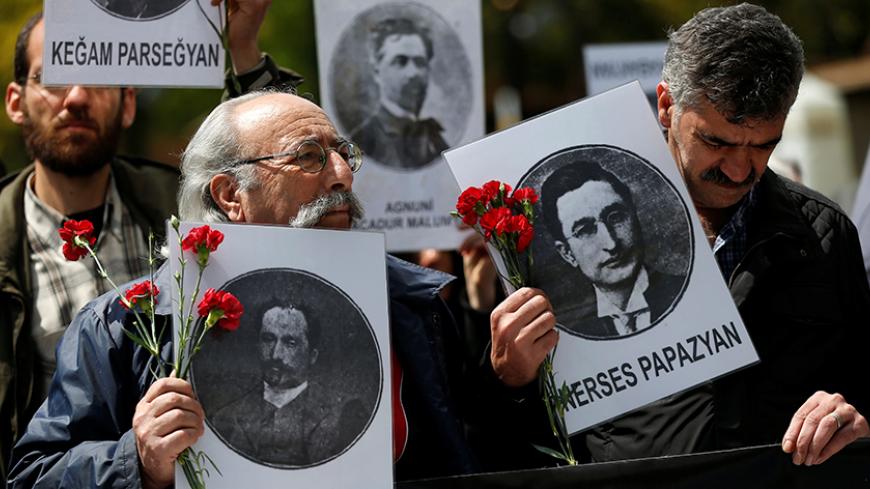 Human rights activists hold portraits of victims during a demonstration to commemorate the 1915 mass killing of Armenians in the Ottoman Empire, at Sultanahmet Square in Istanbul, Turkey, April 24, 2017. - REUTERS/Murad Sezer

“I am firmly convinced that this is the greatest crime of the ages.” These were the words that Henry Morgenthau, American ambassador to the court of the Ottoman sultan, used to describe the mass destruction of the empire’s Armenian population in 1915. At least 1 million people, including tens of thousands of Syrian Orthodox and Christians as well as Yazidis, fell victim to the genocide, which is commemorated every April 24 by survivors across the globe.

Since 2010, after decades of frenzied denial, the tragedy has been publicly commemorated in Turkey as well. Today in Istanbul, where the bulk of Turkey’s shrunken Armenian population, numbering around 60,000, resides, small crowds gathered to honor the dead at organized events. They carried black banners reading, “Armenian Genocide: Recognize, Apologize, Compensate.”

Turkish President Recep Tayyip Erdogan sent a message to the city’s Surp Vartanants Church, where a ceremony was held. Erdogan said, “Dear esteemed Armenian citizens, I salute you with love and respect. … I offer my condolences to the grandchildren of the Ottoman Armenians who lost their lives in the harsh circumstances of World War I. … We have zero tolerance for a single one of our Armenian citizens being ostracized, marginalized or made to feel a second-class citizen.”

April 24 marks the dark moment when 234 Armenian intellectuals and artists were rounded up by authorities and most of them killed. It was just a taste of the bloodbath to follow. Erdogan’s comments are a far cry from the apology and acknowledgement the Armenians feel they are owed, but that he made them at all marks a radical departure from previous government policy.

Garo Paylan, a rare ethnic Armenian member of parliament for the pro-Kurdish Peoples' Democratic Party (HDP) who last week tabled a motion calling for an investigation of the century-old crime, said in a statement today, “Let us not forget that every crime that goes unpunished leads to a repetition of the crime.” Until recently, Paylan would have immediately been hauled off to jail under laws that deemed such assertions an insult to Turkishness and the Turkish nation.

Turkey has long denied that the deaths constitute a genocide and has poured tens of millions of dollars into a largely unsuccessful lobbying effort to promote the story that the Armenians perished as a result of starvation and disease as they were being marched to the Syrian desert in Deir ez-Zor for “their own safety.”

In “Great Catastrophe: Armenian and Turks in the Shadow of Genocide,” Thomas de Waal wrote, “For Armenians, the name [Deir ez-Zor] represents a nadir of their experience, a kind of black hole in which one life ended and — only if you were a lucky survivor — another barely began.” Most respected historians, including a growing number of Turks, have long concluded that what happened in 1915 was indeed a genocide.

Turkey’s continued denial is driven by paranoia about Western designs and a prickly pride that has bred a culture of impunity. This refusal to face up to past crimes, suggests the activist Nurcan Kaya in the independent online newsportal ArtiGercek, has allowed the state to continue to brutalize its citizens without being called to account.

Yet from Germany to Argentina, dozens of parliaments throughout the world have passed legislation calling the massacres a genocide. Turkey’s greatest fear has long been that a US president who pledges to do the same during an election campaign will keep his or her word. Such worries reached a fever pitch in 2015, the centennial of the genocide. The Turkish Foreign Ministry went so far as to set up a special genocide task force to manage the impending “crisis.” It came up with a cynical ruse to lure Western leaders away from centennial commemorations by organizing a rival event, the centenary of Turkey’s victory against the allies during World War I in Gallipoli, held the same day.

No US president has used the term “genocide” in annual messages commemorating the massacres so far, and President Donald Trump followed suit in his statement.

Still, under Erdogan’s Justice and Development Party (AKP), the wall of denial is beginning to crack. In the early days of its rule, when the AKP was still enthusiastic about joining the European Union, the government reached out to non-Muslim minorities. Some properties confiscated by the state were returned to the Armenian, Greek and Syrian Orthodox communities.

The government helped restore a smattering of derelict churches, most notably the glorious Armenian Orthodox Akthamar church in Van. A short-lived rapprochement between Turkey and Armenia prompted a flurry of civil society engagement, which has survived the ensuing collapse in diplomatic gestures. While Turkey and Armenia have yet to establish formal ties and their borders remain sealed, Armenian students and journalists come together in joint projects aimed at reconciliation.

“Today such groups go beyond their Turkish and Armenian identities and find common cause as gays, environmentalists and women,” noted Khatchig Mouradian, a prominent Armenian academic who helps diaspora Armenians reconnect with their roots in far-flung corners of eastern Anatolia or “Western Armenia,” as the Armenians prefer. “Empathy is a great healer,” he told Al-Monitor.

A lot of the activities are organized by the EU and the plucky Hrant Dink Foundation, named after the Armenian-Turkish newspaper owner who was gunned down outside his office in Istanbul in 2007. Dink’s murder touched a collective and deeply buried nerve. More than 100,000 people, mainly Turks, marched during his funerary procession chanting, “We are all Armenians. We are all Hrant Dink.”

The government accuses allies of Fethullah Gulen, the Muslim cleric who it claims masterminded the failed July coup, of plotting — and covering up — Dink’s assassination by a lone ultra-nationalist gunman. Gulen was among those indicted by Istanbul’s chief prosecutor today for his alleged role in Dink's death. The Gulenists deny any wrongdoing, saying the government is using the affair as a means to further discredit their movement.

In any case, the instability and climate of repression wracking Turkey in the aftermath of the attempted putsch are taking its toll on the Armenian-Turkish rapprochement. Armenians from the diaspora are too afraid to come to Turkey. “Islamized Armenians who came out in droves are now feeling abandoned,” said Mouradian, alluding to the thousands of “hidden” Armenians who converted to Islam to escape the slaughter.

Renewed fighting between Turkish security forces and Kurdish rebels in the country’s southeast has dealt a further blow. The recently restored Surp Giragos church, the largest Armenian Orthodox Church in the Middle East, was damaged in fighting that raged for months in Sur, the historic heart of Diyarbakir.

Plans to rename a street and a library in the city of Bitlis after one its most famous Armenian sons, the celebrated painter and author William Saroyan, have been shelved. Government administrators have taken over municipalities run by the HDP’s sister party, the Democratic Regions Party, where signs are displayed in Kurdish, Armenian and Syriac, the ancient tongue of the Syrian Orthodox Christians. The signs have been ripped out and scores of Kurdish mayors — some 85 of them at last count — have been jailed on thinly supported terror charges.