Is Israel prepared for Hezbollah's rearming?

With Hezbollah significantly upgrading its military capabilities, Israel is preparing itself for a third Lebanon war. 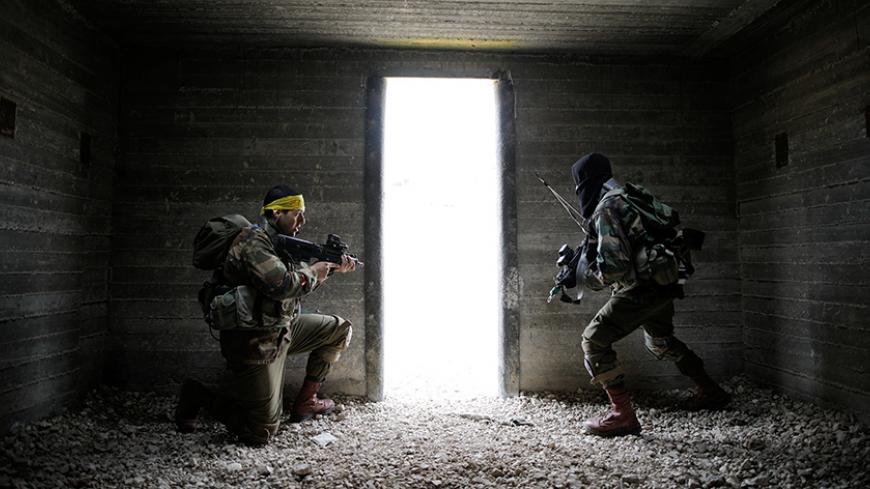 Israeli soldiers from the Nahal Infantry Brigade, one wearing a mock Hezbollah flag headband, take part in an urban warfare drill at an army base near Arad, southern Israel, Feb. 8, 2017. - REUTERS/Amir Cohen

The most important event to take place during Israel's second war in Lebanon (2006) was a phone call between Prime Minister Ehud Olmert and President George W. Bush's secretary of state, Condoleezza Rice, at the start of the hostilities. Lebanon was then ruled by Fouad Siniora's government. While Rice gave Olmert a "green light" to attack Hezbollah, she asked him not to cause any damage to Lebanon's national infrastructure to ensure that Siniora's pro-Western government survived.

Olmert agreed. In retrospect, this was considered to be a seminal moment that caused the war to drag on for a relatively long time and end without any final resolution (then-Defense Minister Amir Peretz resigned following reports that the war was not well-orchestrated). If the Israel Defense Forces (IDF) and the Israeli air force had destroyed vital Lebanese infrastructure during the early days of the fighting, the Lebanese government would have probably pressured Hezbollah to stop firing rockets at Israel much earlier.

It has been 11 years since then, and the situation has changed dramatically. A significant part of Defense Minister Avigdor Liberman's talks in Washington on March 7 was devoted to a war in Lebanon that could erupt at any given moment. According to top Israeli defense sources, this war, if it takes place, must be completely different from the last one. It must last a shorter amount of time and squeeze much greater destructive capabilities into smaller units of time.

The first important difference is the Lebanese army. At a March 6 meeting of the Knesset's Foreign Affairs and Defense Committee, Liberman said that the distinction between the Lebanese army and Hezbollah forces has been blurred considerably over the past few years, as has the distinction between Hezbollah — which also operates on the political level — and the sovereign state in which it resides.

The IDF's working assumption is that the Lebanese army will play an active role against Israel in the next war on Lebanon, operating under Hezbollah's command. Alternately, it will perform select tasks assigned to it by Hezbollah as part of the campaign. Today, even the Lebanese government regards Hezbollah as part of the armed infrastructure vital to defending the country. The new president, Michel Aoun, said as much recently in interviews he gave to the Arab media. While the participation of the Lebanese army alongside Hezbollah in the fighting during the next war will not upset the balance of power — which clearly favors Israel — it could impact the nature and shape of the war.

Another difference anticipated in the next campaign is the balance of terror. While during Israel's second war in Lebanon, the devastation to Israel was limited, today Hezbollah is capable of striking any given point in the country.

In a video clip released Feb. 16, Hezbollah Secretary-General Hassan Nasrallah gave a list of strategic targets in Israel and announced that he would attack them in the next round of fighting. These include the ammonia plant in Haifa, the nuclear reactors in Dimona and Nahal Sorek, Rafael Advanced Defense Systems weapons development facilities and more. What Nasrallah tries to do is to create parity. He has no air force, but he does have tens of thousands of rockets and missiles, some of them long-range and all of them more accurate than the ones he had in 2006. In the second Lebanon War, he had no choice but to stand helpless before the ruins of the Dahiyeh suburb of Beirut, where Hezbollah has its command center. This time, he thinks, Israel will have to contend with similar images of its own.

Israel is aware that at present, it has no real answer to the rocket threat. Sending special infantry units to search for rocket and missile launch sites on the ground is a lot like looking for a needle in a haystack. Israel tried to do this in the second Lebanon war with no real results. What this means is that the only option left to Israel is an immediate, dramatic and aggressive attack against all of Lebanon's vital infrastructure, or as Israeli officers and senior Israeli officials have been describing it for the past decade, "sending Lebanon back to the Stone Age."

Since the distinction between Hezbollah and Lebanon per se has been blurred considerably, the possibility of wreaking destruction on the country could serve as a deterrent, as far as Nasrallah is concerned. He can no longer hide behind the central government, since he himself is the central government. In order to launch such an attack, however, Israel will need prior approval from the United States. According to defense sources in Israel, it has already received such approval, or at the very least, can expect to receive it in the near future. If Israel does find itself launching an aggressive campaign to destroy Lebanon's infrastructure in the next round, it will need the aerial umbrella of US support, which will allow it freedom of action, at least in the first few days of the fighting.

In the second Lebanon War, the IDF ran out of targets to attack within just a few days, because Hezbollah fighters avoided direct contact with Israeli forces. This time, however, the entire country of Lebanon will be a strategic target. Bombing runs will target power stations, airports, important factories, and major roads and intersections. All Lebanese army bases will be destroyed as will the army's armored vehicles, and so on. Given these circumstances, the IDF estimates that the next campaign will be shorter but much more destructive.

Over the past few years, Israel boosted its special forces and created specialized commando brigades. In the next round, it will try not to avoid various land maneuvers, even though the operations on land in the last Lebanon conflict turned out to be a dismal failure. In this era, in any case, it makes no sense to talk about "victory." All that is left is to try to create a deterrent and ensure that it is etched deeply in Lebanon's consciousness. That is what Israel will try to achieve in the next war.

When would this war break out? The Israeli assessment is that Nasrallah has no reason to get into a conflict with Israel in the foreseeable future. The IDF claims that as long as a significant part of his forces is over-extended and exhausted in Syria, Nasrallah will try to avoid a clash with Israel. At the same time, however, signals from Beirut over the past few months indicate that Nasrallah's patience is starting to wear thin. According to foreign sources, the rules of the new game that Israel has imposed over the past few years, in which it feels free to attack arms convoys making their way to him from Syria, are unacceptable to Nasrallah.

According to recent intelligence from the West, the Iranians have established rocket-manufacturing facilities in Lebanon in order to "circumvent" the wall of intelligence and Israeli bombings, which prevent the unhindered supply of rockets to Hezbollah. In any event, Nasrallah's armories are full. There is very little chance that "these missiles will get rusty," as former IDF Chief of Staff Moshe Ya'alon once predicted. Israel knows that if there is a missile on the table in the first act, it will be fired in the third act. At some time or other that is going to happen.