Will Turks in Europe bear brunt of Erdogan's outbursts?

While the Netherlands is Turkey's latest target of tough rhetoric, the millions of ethnic Turks in Europe could face a future that is uncertain and more difficult than it already is for them right now. 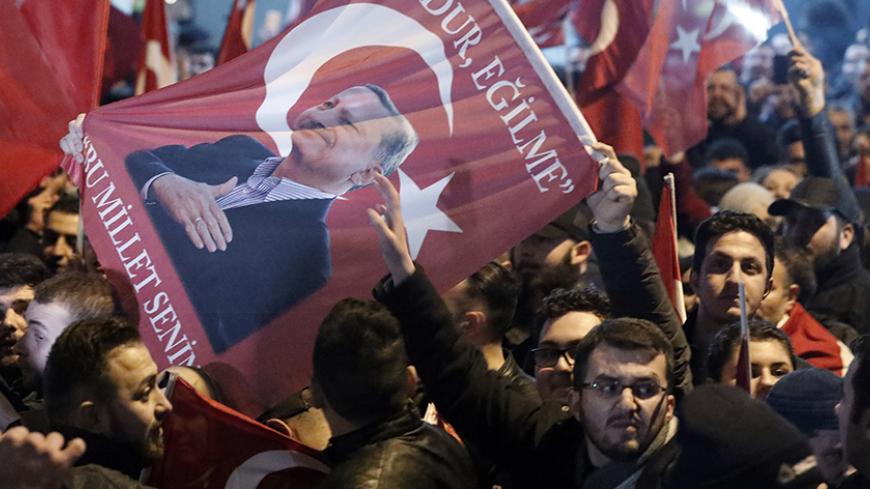 Demonstrators with flags of Turkish President Recep Tayyip Erdogan gather outside the Turkish Consulate to welcome the Turkish Family Minister Fatma Betul Sayan Kaya, who decided to travel to Rotterdam by land after Turkish Foreign Minister Mevlut Cavusoglu's flight was barred from landing by the Dutch government, in Rotterdam, Netherlands, March 11, 2017. - REUTERS/Yves Herman

“They contributed to our 'yes' votes with at least two points. You can be sure of that.” The assertion by ruling Justice and Development Party (AKP) lawmaker Huseyin Kocabiyik, during a televised debate sums up the thinking that is driving the row between Turkey and the Netherlands.

On April 16, millions of Turks will go to the polls to vote on a constitutional package of reforms that will concentrate power in the hands of Turkish President Recep Tayyip Erdogan. Opinion polls consistently show that Turkish voters are evenly divided, with around 40% in favor of the changes, 40% against and the remaining 20% undecided.

Millions of ethnic Turks in Europe who are either permanent residents there or dual nationals — some 1.5 million eligible voters reside in Germany alone — are a lucrative pool to fish for more "yes" votes. And that is precisely what the AKP has been aiming to do, only to face stiff resistance first from Austria and Switzerland, then Germany and now the Netherlands. All have cited security concerns in their refusal to let Erdogan and his lieutenants take their polarizing campaign to the continent.

Erdogan is gleefully spinning the rebuttals as further proof that Europe is bent on blocking his super-presidency because it knows that this will further empower Turkey. The well-worn “us against the world” narrative summed up by the Turkish adage “the Turk has no other friend than the Turk” has served Erdogan well in the past and may likely pay off again, helping to rally nationalists around the “yes” vote.

Marc Pierini, a former European Union ambassador to Ankara and a nonresident fellow at the Carnegie Endowment for International Peace, told Al-Monitor, "By now, Ankara earned some tens of thousands of 'yes' votes in Germany and the Netherlands.”

Things already began to turn ugly over Germany’s refusal last week to allow Erdogan to stump on German soil, prompting the Turkish leader to charge that Germany had failed to shake off its Nazi past.

In the Netherlands, tensions spiraled out of control after the Dutch authorities refused landing rights to Mevlut Cavusoglu, the Turkish foreign minister, on March 11. Later that evening, Family Affairs Minister Fatma Betul Sayan Kaya arrived by car from Germany and was refused entry to the Turkish Consulate in Rotterdam. Around a thousand Turkish protesters draped in Turkish flags gathered at the consulate chanting “Ya Allah Bismillah Allahu Akbar” ("Oh God, in the Name of the Compassionate and the Merciful, God is Great"), an Islamist slogan that is often heard at AKP rallies.

In a research note, Wolfgango Piccoli of Teneo Intelligence, a risk consultancy firm, noted that Turkey’s insistence to hold rallies in the Netherlands “appears to have been a calculated attempt to trigger a confrontation with the Dutch authorities.” That is what they got.

Turkish newspapers carried images of baton-wielding Dutch riot police with dogs rounding up bloodied Turkish protesters on their front pages today with headlines such as “Nazi Dogs” and “They will pay.”

The scenes also played straight into the hands of Geert Wilders, the far-right anti-Islamist Dutch populist whose fortune in the parliamentary elections March 15 is seen as something of a bellwether for like-minded xenophobes Europe-wide.

“Erdogan repeats we are nazis + fascists. He insults Dutch police. No de-escalation. Expel Turkish Ambassador to NL and entire staff!” he wrote in a tweet March 13.

Pundits say that Liberal Dutch Prime Minister Mark Rutte’s muscular response to Turkey was calibrated in part to fend off his rivals’ charges of wimpishiness ahead of Wednesday's vote.

The war of words escalated with Cavusoglu calling the Netherlands the “capital of fascism” and playing on Turkish slang to question whether Rutte was an asshole.

Erdogan, who had earlier opined that the Dutch were “Nazi remnants,” warned them at a gathering in Istanbul on March 13, saying, “If you can sacrifice Turkish-Dutch relations for an election on Wednesday, you will pay the price.”

But it is more likely that Turkey and its diaspora will pay the price. “The immediate consequence is that the EU-Turkey relationship has gone cold,” Pierini said. “EU summits [with Turkey] may be off for quite some time.”

Froukje Santing, a veteran observer of Turkish-Dutch relations, told Al-Monitor, “This will backfire on Turks in Holland. They are already seen as the worst immigrants in terms of integration. The majority of Dutch feel affronted that they support a leader [Erdogan] who is creating a more and more undemocratic Turkey.”

Santing added, “The Dutch Turk will be under increasing pressure to decide whom they are loyal to in the end. Holland or Turkey.”