Even though Iran's supreme leader has publicly "advised" him not to run for office, former president Mahmoud Ahmadinejad appears to think that it doesn't apply to his inner circle. 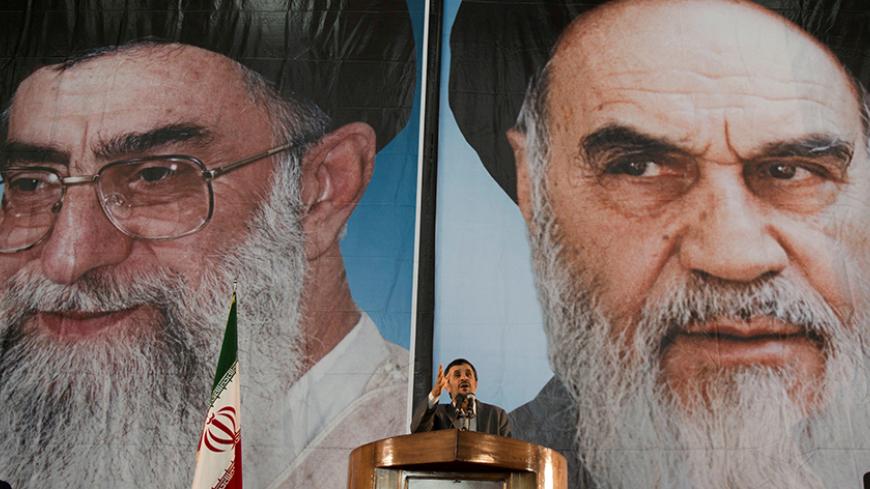 Former President Mahmoud Ahmadinejad is one of the most unique players on Iran's political stage — an unpredictable figure who is no stranger to political U-turns. On Feb. 11, he officially announced that he would not back any candidate in the May 19 presidential elections. Yet, Ahmadinejad, who was president from 2005 until 2013, has become one of the most active campaigners — even more so than some of the candidates actually running in the race — and he is vigorously supporting his former deputy Hamid Baghaei, who announced his candidacy just days after Ahmadinejad's announcement.

Indeed, the conservative former president's activities have not been what could be called stable.

On Feb. 26, Ahmadinejad wrote a 13-page letter to US President Donald Trump, offering advice in his unique style. A week or so later, on March 5, which is National Tree Planting Day in Iran, Ahmadinejad attended a private ceremony with Baghaei as well as his former chief of staff Esfandiar Rahim Mashaei. The event marked the first time that Ahmadinejad and Baghaei were caught on camera together since the latter announced his candidacy. Although there was no talk of the elections at the ceremony or any declaration of political support for Baghaei, Iranian media and social media networks broadly covered their appearance together. Many described the videos of Mashaei, Baghaei and Ahmadinejad speaking with each other as fake and ridiculed the trio.

Ahmadinejad’s presence on the Iranian political stage has grown in recent weeks. In a statement issued March 4, he attacked the administration of incumbent President Hassan Rouhani. The following day, he officially joined Twitter — even posting a tweet in English along with an video in which he calls on people — in English — to follow his account.

The pinnacle of the former president's recent political activities, however, was his declaration of support for Baghaei in a video released March 19. In the video, Ahmadinejad also referred to the "recommendation" of Supreme Leader Ayatollah Ali Khamenei, who in September publicly "advised" Ahmadinejad against running in the upcoming presidential elections. Ahmadinejad said, "Baghaei’s candidacy is in no way against the [supreme] leader's advice that I not run for the presidency. [This is] not to mention that Baghaei's decision to take part in the race was completely independent [of me]. Many have asked that I participate in the elections. We have to help so that the mistake that happened four years ago, when righteous people were prevented from taking part in the polls, is not repeated and that the country can return to its path of progress, from which it has been falling behind for [the past] four years."

In another video message March 20, Ahmadinejad is seen sitting next to Baghaei while congratulating Iranians and all those who celebrate Nowruz, the Iranian New Year. The four-minute clip ends with Baghaei also speaking for a few seconds and congratulating the people's Nowruz.

The former president has also resumed his provincial trips, traveling to the southwestern province of Khuzestan on March 2. The province has been grappling with dust storms and pollution in recent months, prompting a public outcry over the Rouhani administration's handling of the situation. While in Ahvaz, the provincial capital, Ahmadinejad continued his monthslong criticism of Rouhani's performance — not only in regard to the environmental crisis, but also for restricting payments of monthly cash handouts, even going as far as accusing Rouhani of being a dictator.

There was another part of his Khuzestan speech that stirred controversy and has been widely circulated on social media. In his speech, Ahmadinejad said that "97% of [the Iranian] people want something, but someone sitting up there says 'no.' This is a bad thing. Who are you to decide for all these people? Where did you get all this power from? Are these people not the ones who gave you this power? The Iranian nation had a revolution so they would not see such people."

While some interpreted Ahmadinejad's words to be a direct criticism of the supreme leader, others believe Ahmadinejad was really addressing Rouhani. A thorough review of his speech indeed points to Rouhani as the target of his words; the remark about "97% of the [Iranian] people" was in reference to the public's desire to receive monthly cash payments. The Rouhani administration has notably cut the number of cash subsidy recipients while also trying to forge a mentality among the public that the policy is damaging to the country's economy. Of note, the monthly payments were instituted by Ahmadinejad as part of major subsidy reforms.

Headlines aside, what impact will Ahmadinejad's activities have on the outcome of the presidential elections? Although the former president insists on being independent, and his many statements portray him as not being attached to any political movements, his background — as well as that of his former Cabinet members during his two terms in office — indicate that he entered Iran's political stage with a Principlist record. This is not to mention that he was only able to climb the ladder of power through the backing of the Principlists. For this reason, Ahmadinejad — or any person or movement that may enter the election race on his behalf — will have commonalities with the Principlists.

Sadegh Zibakalam, a prominent professor of political science at Tehran University, told Al-Monitor, "The probability of Mr. Baghaei being approved [by the Guardian Council] is very low, because he has the history of a judicial [corruption-related] case against him. But even if he is approved, I doubt Baghaei will be able to split the vote of the Principlists, because even supporters of Ahmadinejad are not willing to vote for him."

Although Baghaei lacks Ahmadinejad's charisma, he can be damaging to the Principlist camp if he gets the green light from the Guardian Council and actually runs for office.

Having seen Mashaei disqualified as a candidate in the 2013 elections, this time Ahmadinejad has threatened to not allow "righteous individuals" to be barred from running for office. While he did not publicly declare serious objections to Mashaei's disqualification in 2013, it is not clear what his reaction would be if Baghaei iswill, as anticipated by most political analysts, be disqualified too.

Although Ahmadinejad has been proven to be an unpredictable person who will do a lot to remain in power, one thing is clearly different in the current equation: Khamenei's public "advice" that he not take part in the elections. Whether Ahmadinejad will continue to see this "advice" as only being addressed to him and not his allies remains to be seen.