How Tunisia's young entrepreneurs are hoping to boost the economy

Co-working spaces support the rising entrepreneurship sector among the educated youth who are unable to get traditional jobs. 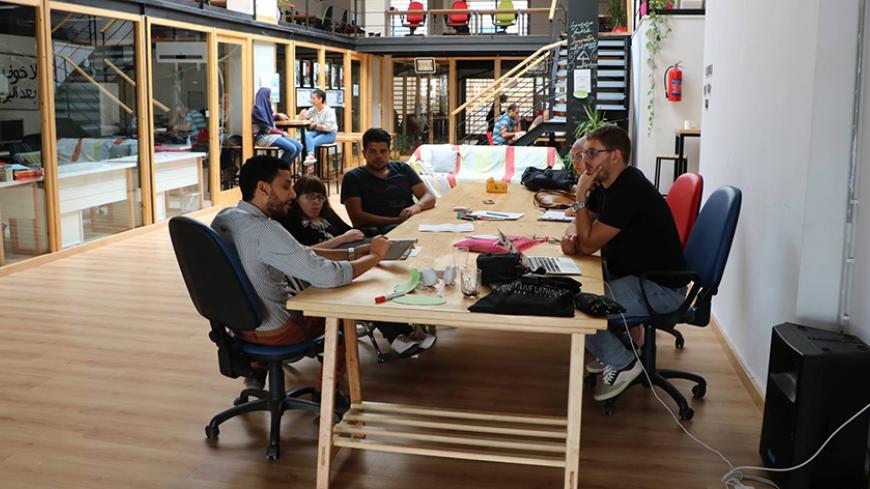 Two dozen casually dressed entrepreneurs were gathered around a Scandinavian-style wooden table, eating glazed pastries and pouring each other cups of coffee. They introduced themselves — web designer, graphic designer, gamer — in a mix of French, Arabic and English. With its sleek blond wood floors and rustic pallet sofas, we could have been at a hip cafe in Brooklyn or Berlin. But this is Startup Haus, a co-working space in downtown Tunis, just a stone’s throw from the city’s busiest intersection.

“Since 2011, you can say there’s been a boom,” Miriam, the manager at Startup Haus, told Al-Monitor during a recent visit.

Although the legal framework pertaining to startups has not been updated since the country’s startup minister, Noomane Fehri, was booted from his post and financial lending from national banks is still difficult to procure, Tunisia’s entrepreneurship sector has been on the rise.

But the most promising aspect are the Tunisians themselves.

“As a young Tunisian after the revolution, it is as if we have a breath of fresh air. I really believe in entrepreneurship to create jobs,” said Khouloud Talhaoui, a 27-year-old business developer with Iris Technologies, which rents an office space at Startup Haus. The start-up helps apiculturists manage their beehives with new technology. Talhaoui admits that the spirit of entrepreneurship is “still in its infancy,” but attention is increasing."

On the ground floor, Startup Haus has three enclosed offices for established businesses; they are all currently in use. Responding to demand, the Haus has plans to create several more offices this year. Around 25 individuals use the mezzanine, which is for people who are in the initial phases of project creation. Other co-working spaces, like Cogite, have several hundred entrepreneurs and digital nomads filtering in and out of the space each day.

Tunisia has a surplus of educated youth, many of whom are unable to get traditional jobs. Unemployment currently hovers around 15.5% across the country, with youth unemployment reaching up to 42%. Co-working spaces normalize entrepreneurship, provide a flexible and cheaper option than an office, and most importantly, provide a community of like-minded, supportive individuals.

“I love working with others in a space where everyone helps each other,” Housem Zouaghi, a 25-year-old computer scientist and multimedia engineer told Al-Monitor. Zouaghi studied in Canada before returning to Tunisia to create his gaming startup, which has now branched out into advertising and web design. Zouaghi started with two employees; in five months, he’s hired six more people.

Many events are free and open to the public, and the spaces themselves are imbued with a positive, can-do attitude. Though most co-working spaces are concentrated in Tunis, the country’s capital, two new spaces opened in Sousse and the southern island of Djerba.

“We have the youth, the hope and even the financial support,” Talhaoui said. Co-working spaces are helping to create a more favorable climate for entrepreneurs, and the future looks bright.

“I don’t have any reason to leave,” said Zouaghi with a smile.