A French NGO launched a project, with the help of five artists from Syria, Lebanon and France, to publish a graphic novel on the financial, emotional and social struggle of Syrian refugees in Lebanon. 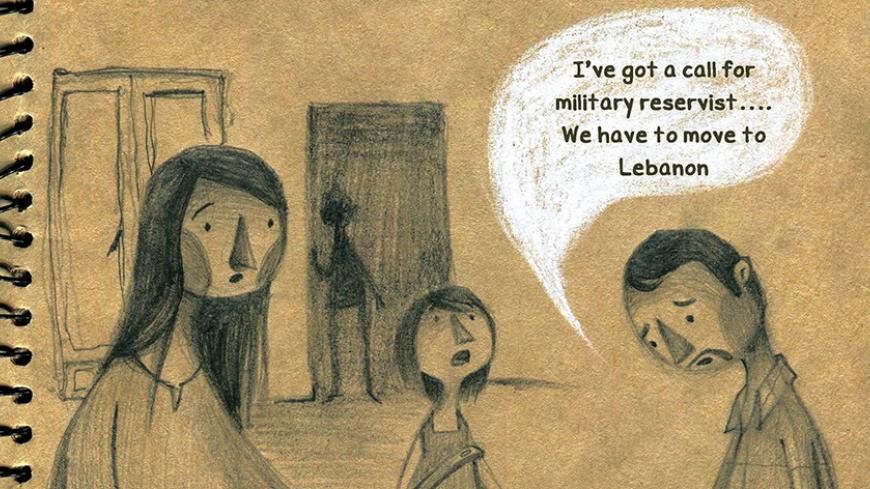 “Meantime” is a graphic novel project initiated in March 2016 by French nongovernmental organization (NGO) Solidarites International (SOL). Five French, Syrian and Lebanese artists spent weeks talking with Syrian refugees in Akkar and Tripoli in northern Lebanon to create five graphic stories, which have been available online since Feb. 21 in English, Arabic and French.

According to the United Nations High Commissioner for Refugees, Lebanon hosts more than 1 million Syrian refugees; one in every four people in Lebanon is a refugee. Organizations working on the ground to help vulnerable displaced families face many challenges, such as funding for their programs and projects and telling the individual stories of this population to Western audiences.

SOL was established 35 years ago and has been working for the past three years in Akkar and Tripoli, providing cash assistance and access to water and hygiene products to their Syrian refugee beneficiaries as well as fixing their shelters.

“At the end of 2015, I was in charge of working on a communication project to bring awareness to the people in Europe and Lebanon about the living conditions of the refugees,” Pauline Gregoire, who is in charge of communications and reporting at SOL, told Al-Monitor. “I didn't want to create a photo or video exhibition that would make people cry.”

At that time, French artist Lisa Mandel was featured in the French newspaper Le Monde with her graphic novel about life in the Calais "jungle," an informal camp for migrants and refugees wishing to reach England from France that was dismantled gradually from February 2016 onward. “I thought the graphic novel format was nice and light,” Gregoire recalled. “Plus, it is really accessible to everyone and there is this trend of the journalistic graphic novel nowadays, so that is really a modern approach.”

She added, “We had the idea of humanizing refugees — give them an identity. They are human beings who lost everything, who arrived at a new place without anything. They are very vulnerable, but also with very different personalities and stories. It is important to make people understand that they could be any of us. Mandel in her blog on Calais used the comparison with a metro car, saying, "All these people in it could also be in a camp. We have to put names on the numbers to create empathy.”

For the project, which was realized in partnership with UNICEF, the European Union and the US State Department, five artists from France, Lebanon and Syria — Diala Brisly, Kamal Hakim, Lena Merhej, Mandel and Nour Hifaoui Fakhoury — were chosen to give a local, regional and international perspective in regard to the refugee crisis in Lebanon.

For Mandel, whom SOL first contacted given her experience in Calais, coming to Lebanon was a logical step after covering Calais. “I wanted to discover Lebanon and discover differences and similarities between the two situations,” Mandel told Al-Monitor. “Of course, the quantities are not the same. In Calais, there were 10,000 people and everyone was living in a terrible situation — in the mud, in the rain, it was really glaucous. In Lebanon, people are not alone, they are with their family, they are mostly sheltered, even though they are the poorest of the poorest and can only wait for the war to be over. The only thing is that in France, anyone can access proper health care, not like here [in Lebanon] where you have to pay huge amounts of money for everything.”

Mandel described her role in the project as an “information giver.”

On the other hand, for Syrian artist Brisly, who used to independently work with refugees in collaboration with different associations and NGOs, especially children through workshops and murals, it was a way to express something that really struck her during her work in the informal settlements: the relationship between families and men. “I concentrated on how men are also traumatized and need psycho-social support,” Brisly told Al-Monitor.

She added, “Everyone is focusing on women and children and thinking men are like rocks, like they don't need anything. My culture and in general the culture in the region stipulates that men have to financially support and protect the family. Because of the war, men lost this status and feel totally lost. The family balance has been completely changed."

With more risks of being stopped at checkpoints and often lacking legal documentation, male refugees rely on their wives or children to work in order to survive because women and children have more freedom of movement. “This trauma often reflects on the man's relationship with his family, and NGOs — by helping mainly women and children — participate in increasing the gap between the family members,” Brisly said. Her fictional story therefore allows the reader to understand each family member's perspective in a way that highlights the feelings of the men who find themselves in this situation. “Anyone coming back home not being able to fulfill his role would be angry and frustrated, and it affects everyone around him. Men can also be sad and weak,” she added.

Three Lebanese artists participated in the project, including young Fakhoury, who chose to work on the situation of refugees in Tripoli, their daily struggles and survival skills. She had previously worked for her master graduation project on a comic about the point of view of a Lebanese Christian neighborhood on refugees. “I could do the exact opposite and discover how refugees are actually managing to live,” Fakhoury told Al-Monitor. “It was also a chance to do some research and understand people I didn't really know.”

As a Lebanese, she was glad to discover strong people who are fighting to survive, still having hope and taking care of their family. “I gained a lot in this project — both professionally and personally,” she said. “I want their stories to be heard.”

This graphic novel project contributes to providing another perspective on what millions of people go through while living in exile in countries around world, as well as humanizing the individual displaced person.