Tensions have emerged in the relationship between Egyptian President Abdel Fattah al-Sisi and Al-Azhar, with the former promoting reform that the latter finds unacceptable, rejecting governmental influence on religion. 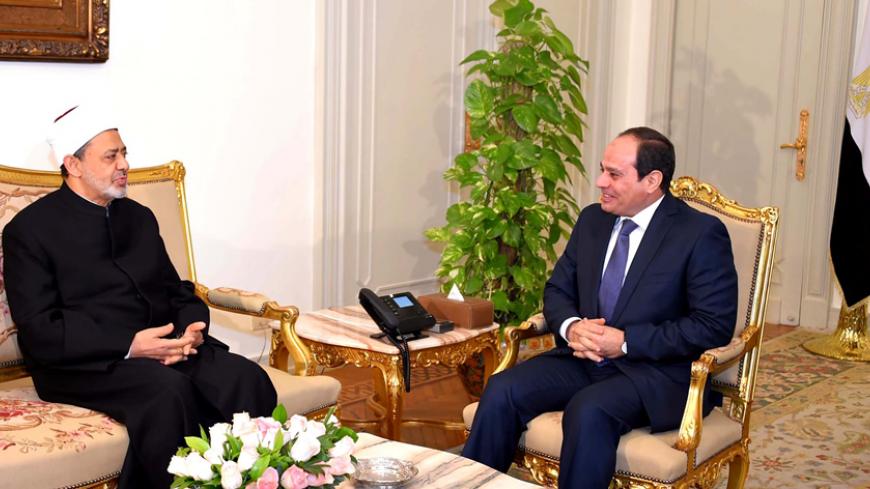 When Field Marshal Abdel Fattah al-Sisi, then defense minister, gave a televised speech on July 3, 2013, announcing that President Mohammed Morsi had just been overthrown, he was flanked by Egypt’s top religious leaders, Pope Tawadros, the head of Egypt’s Coptic Orthodox Church, and Sheikh Ahmed el-Tayeb, the grand imam of Al-Azhar. Tayeb, who had earlier called on Morsi  — the country’s first democratically elected president — to step down to end the bloodshed, threw his weight behind the military man who helped rid Egypt of the Muslim Brotherhood, since designated by the country as a “terrorist group.”

Now, nearly four years later, cracks have appeared in the alliance between Sisi (himself a devout Muslim), who became president in 2014, and Al-Azhar, Sunni Islam’s oldest seat of learning. Al-Azhar has resisted repeated appeals by Sisi to “renew Islamic discourse” and “modernize the faith.” Any doubts skeptics might have had about Tayeb and Sisi not seeing eye to eye in regard to "modernizing Islam” vanished when the president publicly took a jab at the grand imam last month, telling him, “You wear me out.” While the remark was made jokingly, it signaled underlying tensions in their relationship, suggesting Sisi’s patience with Al-Azhar’s intransigence on reforms may be wearing thin.

Sisi first made his impassioned plea for what he called a “religious revolution” two years ago during a New Year’s Day speech at Al-Azhar, lamenting that ”radicalized thinking is antagonizing the entire world and tearing the umma [Islamic nation] apart.” His bold comments earned him praise from Western supporters who noted that Sisi had done something that no Western leader had had the courage to do. Skeptics, however, cautioned that Sisi was an unlikely reformer as “he champions the application of Islamic law [Sharia].” Furthermore, Sisi had given no specifics regarding the revolution he seeks, argued Daniel Pipes in an article published by the Middle East Forum think tank he heads.

At home, Al-Azhar scholars took Sisi’s exhortations for religious reforms with a grain of salt. “Any change must come from scholars of Islam, not from the government,” an Al-Azhar official, who declined to be named because he was not authorized to speak to the press, told Al-Monitor. Hinting that Al-Azhar preachers resent state interference in their religious affairs, he criticized the decision by the Ministry of Religious Endowments to unify sermons at Friday congregational prayers in mosques across the country.

“The Ministry of Religious Endowments decides on the topics the imams will be preaching on each week, but often the sermons prepared by the ministry are insensitive to the circumstances of the place where they are being delivered,” he complained. “A sermon on cleanliness may be well received by mosque-goers in Cairo but would be unsuitable when preached in mosques in the northern Sinai town of el-Arish, a hotspot for violence in recent months."

He also rejected claims by some critics that Al-Azhar's curriculum promotes fundamentalism and violence. “Tens of thousands of students — local and foreign — study at Al-Azhar. How many of them have become terrorists?” he asked. The grand imam, too, has rebutted the allegation that the centuries-old Islamic institution was spreading radical ideas, insisting that “Al-Azhar is the pulpit of moderate, centrist and tolerant Islam.”

A special committee of educational experts, created in 2015 at the behest of Sisi, has been reviewing and updating Al-Azhar’s educational curriculum, weeding out content perceived to be inciting violence. Meanwhile, a YouTube channel launched two years ago and overseen by Al-Azhar scholars has the declared aim of “countering Islamic State propaganda.” Plans are also underway to launch a new Al-Azhar TV channel in the coming months ”to promote moderate thought.” While these are all steps in the right direction, they fall well short of Sisi’s aspiration of “revolutionizing Islam.” Much more needs to be done if Al-Azhar wants to show it is serious about combating the surge in terrorist attacks and curbing the spread of extremism, alongside the government, which is battling IS-affiliated groups in the Sinai Peninsula.

Al-Azhar‘s senior scholars have thus far refused to accuse IS of heresy, arguing that “Islam prohibits accusations of heresy as only God knows what is in someone’s heart.” They claim that IS cannot be considered heretical as long as its members have uttered the shahada (the Muslim declaration that there is no God but Allah and that Muhammad is his prophet.) The institution’s clerics have also failed to back calls by rights activists to annul the country’s controversial blasphemy laws that allow citizens to be prosecuted for "insulting religion" despite Sisi's giving a nod to such calls.

Islamic thinker and TV talk show host Islam El-Beheiry spent the most part of 2016 behind bars on the charge of contempt of religion for questioning the authenticity of various religious texts interpreting the Quran and calling for their revision on his show on the privately owned Al-Kahira Wal Nas Channel. A legal complaint was filed against him by a private citizen after Al-Azhar demanded the suspension of his show for “defaming Islam.” Beheiry was originally handed down a five-year sentence that was reduced to one year by an appeals court in December 2015. He was released in November after Sisi granted him amnesty and has since vowed to continue to speak out against “radical thought.” In his first television appearance on the privately owned Al-Mehwar channel days after his release, he denied having committed a crime and paid tribute to Al-Azhar. However, he said that "the problem lies with the Salafists within the institution who continue to defend problematic religious texts upon which IS practices are based. Al-Azhar condemns the actions of IS, saying IS members are misinterpreting the texts. They are not; the texts tell them to kill and it is these texts that should be condemned.”

Beheiry told Al-Monitor that Sisi is serious about reforming Islamic discourse, but unifying the sermons in mosques will not change anything. “To counter the threat of terrorism, Al-Azhar needs to acknowledge that the problem lies in outdated Islamic heritage books that were written in the medieval period or earlier. These books promote jihad [holy war] and intolerance. Terrorist attacks will continue as long as these books are available, poisoning people’s minds,” he said.

Eslam Abdel Raouf, an assistant professor of journalism at Al-Azhar, acknowledged that there are internal divisions within the institution. “Like any other institution in the country, Al-Azhar has reformists and ultraconservatives. The former group supports Sisi’s calls for reform while the latter is against it,” he told Al-Monitor. “The dominant view among Al-Azhar clerics is that change is welcome as long as it does not touch the fundamentals of the religion. While it is fine to modernize religious discourse to make it more appealing to the youth, state interference in religious edicts [fatwas] is considered a red line that must not be crossed.”

Sisi was perceived by the clerics as having crossed that line when he recently called for a law banning verbal divorce in Egypt in an attempt to reduce the country’s burgeoning divorce rate, which in 2015 went up by 10.8%, according to Egypt’s Central Agency for Public Mobilization and Statistics. Sisi had lamented in a speech he gave at the Police Academy on the eve of National Police Day on Jan. 25 that 40% of all marriages in Egypt end within the first five years. He urged the grand imam, who was present in the audience, to lend his support to the proposed legislation.

In a rare show of defiance, however, Al-Azhar rejected the plan, drawing a clear line between religion and politics. A statement released by Al-Azhar's Council of Senior Clerics stated, “Verbal divorce, when meeting all the conditions — the husband has to be fully conscious and of sound mind when uttering the words 'I divorce you' — has been an undisputed practice since the days of the Prophet Muhammad.“

Al-Azhar’s rejection of Sisi’s proposal places the religious institution on a direct collision course with the head of state, signaling a marked shift in the relationship and possibly the beginning of a tug of war for greater autonomy for the institution — perceived as "politicized" by some analysts. In the meantime, Sisi’s push for religious reforms hangs in the balance.