One wonders why all this persistent sympathy for US President Donald Trump exists in Turkey’s pro-Erdogan universe. There are two answers. 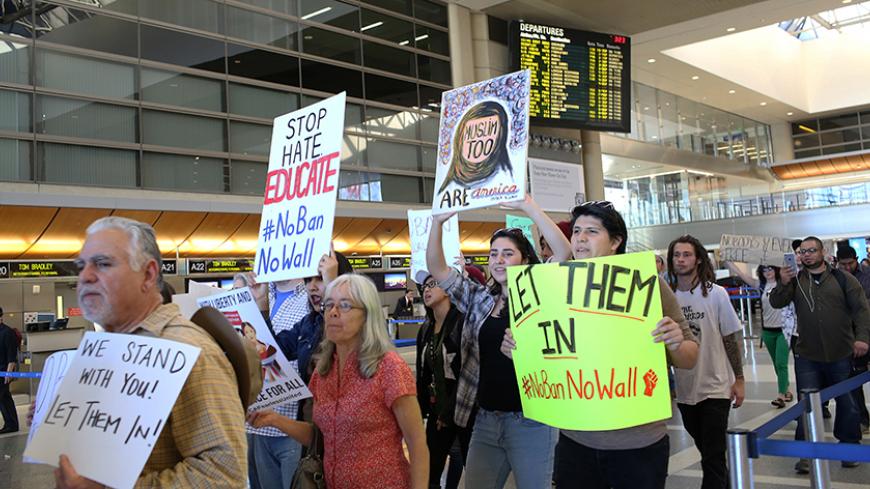 The executive order by US President Donald Trump, banning the citizens of seven predominantly Muslim nations from entering the United States, has sparked major protests all across America. Most Muslims, naturally, were happy to see this solidarity offered to them by Jews, Christians, atheists and many others who do not share their faith.

However, the same solidarity did not come from some of the Middle Eastern governments that often claim to be the defenders of the faith. These include, as noted in a recent article in The New York Times, key Arab states such as Saudi Arabia and Egypt, which seem to have political expectations from Trump that they do not want to spoil. Notably, they also include Turkey, which not only has political expectations from Trump but also has a political elite that has a curious adoration for the new American president.

In fact, to say that the Turkish government said nothing about the “Muslim ban” would be wrong. Prime Minister Binali Yildirim made a critical remark on the ban Jan. 28, noting, “Regional issues cannot be solved by closing the doors on people.” Yet he said this only when he was asked about it, and only in a tone that was conspicuously indirect and mild. Then, three days later, Deputy Prime Minister and government spokesman Numan Kurtulmus criticized the ban more openly, calling it “a discriminative decision,” which he hoped would be corrected.

Meanwhile, President Recep Tayyip Erdogan, the ultimate authority, has so far said nothing about the “Muslim ban.” Moreover, his propaganda machine, consisting of at least 10 national newspapers, several TV channels and thousands of social media trolls, has also been unusually silent about the issue. Daily Sabah, the flagship of the pro-media empire, has been absolutely silent on the ban. Daily Star, another key newspaper in the pro-Erdogan media, published only a small and neutral report. Daily Aksam did run a headline on the ban, but only with a subtitle: “He [Trump] must be given a chance.” With the possible exception of daily Yeni Safak, which has been criticized lately for not being Erdoganist enough, the pro-Erdogan media’s stance on the Muslim ban has been unmistakably cautious.

In fact, despite the ban, the pro-Erdogan media ran opinion pieces that kept praising Trump. According to one of them, Trump was a revolutionary who ended “the military coup era” in America, defeated “global capitalism” by the “national will” and formed a Cabinet of “the most intellectual generals in history.” According to another writer, Trump has been unfairly turned into a boogeyman by the conspiratorial forces of the CIA, George Soros, Hollywood and the music industry.

No pro-Trump opinion piece was as notable, however, as the one penned by Hilal Kaplan, a key pundit in the pro-Erdogan media. In her column in daily Sabah, Kaplan took great pains to explain why the “Muslim ban” did not matter much, why Trump is still a promising leader and why his liberal opponents are the real bad people. Accordingly, the American president who is responsible for destabilizing the seven banned Muslim nations was none other than former President Barack Obama. It was of course bad that American Muslims were in trouble, but what really mattered were “Muslims in our region.” (And Trump, somehow, would be better for them.) Ultimately, Kaplan explained, what really matters is Turkey’s interests: “Turkey is strong,” she argued. “The umma will also be strong.” (And Trump, somehow, would be better for Turkey.)

I have seen this pro-Trump spirit among Erdoganists on social media as well, when I tweeted about the irony at hand: “American liberals are defending the rights of Muslims. But our supposedly 'Islamist' media is applauding Trump against those liberals.” In return, the usual pro-Erdogan arguments in favor of Trump poured in: American liberals were protesting Trump not because they loved Islam, but because Trump threatened their dirty interests. In fact, all Americans were anti-Islam and Trump deserved respect because he was at least honest about it.

One wonders why all this persistent sympathy for Trump exists in Turkey’s pro-Erdogan universe. Erdogan, after all, often presents himself as the defender of all Muslims, and this should have normally required a clearer stance against the Western narratives and policies that offend Muslims. Why does Trump get so much leniency from a usually pro-Islamic political line?

There are two answers to this question. The first answer is pragmatic. Erdogan and his team have some important expectations from Trump. One is that he may help extradite Fethullah Gulen, who Turkey sees as the mastermind of the failed coup attempt on July 15, 2016. The other one is that Trump may stop the Obama administration’s policy of supporting the Syrian Kurdish forces, who Turkey considers to be terrorists. It is in fact not clear whether the Trump administration would take such steps, but Ankara wants to see what it can get from Trump and does not want to offend him before any possible progress.

The second answer is ideological. Trump’s populism resonates with the populism of Erdogan, creating an affinity of worldviews. When Trump condemns the “mainstream media,” or his strategist Stephen Bannon says the media should “keep its mouth shut,” Erdoganists see a very familiar style of strongman politics that they admire. When Trump condemns the conspiracies of “internal bankers,” he says something that confirms the conspiracy theories of Turkey’s new ruling class. Basically, both Erdogan and Trump represent a nationalist, nativist, populist battle cry against the global liberal order, and this creates common ground between the two sides. The fact that Trump dislikes Islam while Erdogan champions it, apparently, is not important enough to disrupt this new transatlantic connection.