Does Syria really want to reconcile with Kurds?

The future of Syrian Kurds is uncertain, but they have at least made it obvious that things must change. 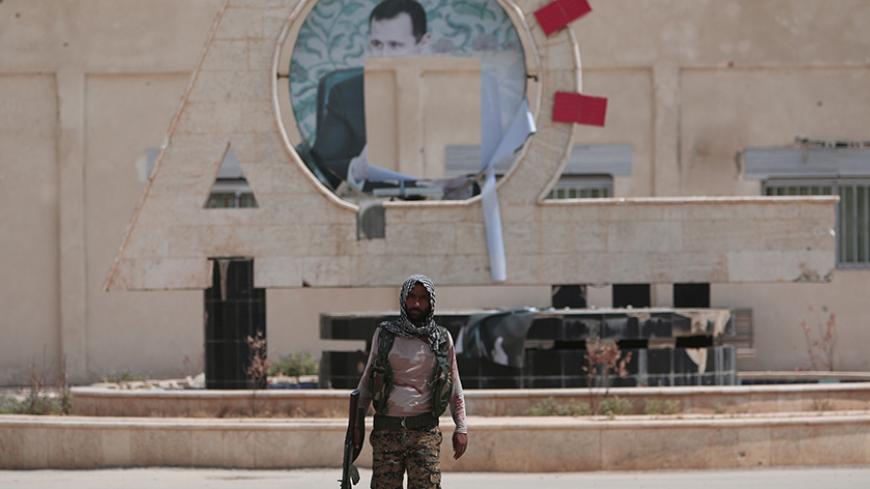 A Kurdish fighter from the People's Protection Units carries his weapon as he walks at the faculty of economics where a defaced picture of Syrian President Bashar al-Assad is seen in the background, Hasakah, Syria, Aug. 22, 2016. - REUTERS/Rodi Said

QAMISHLI, Syria — Syrian Kurds are working quietly but feverishly to build a state entity with its own security, economy and sociocultural bodies. But what if Damascus rejects this system and opts for war?

On electricity poles flutter flags of the People's Protection Units (YPG) and its Women's Protection Units (YPJ) — the defense forces of the Democratic Federal System of Northern Syria, still known informally as Rojava. Streets are controlled not by the army, but by the Kurdish Asayish (a Kurdish security organization) units.

In a swath of land along the north, a pre-planned structure for autonomy is slowly taking shape from Qamishli to Hasakah, from Tell Abyad to Kobani and Manbij. Although they are not physically linked to the main body, Afrin and Aleppo’s Sheikh Maqsoud district are considered parts of it.

Syrian officials I spoke with talk of first eroding organizations like IS and Jabhat Fatah al-Sham and then regaining control of the area without fighting the Kurds — but also not allowing them to mutate into federalism. Kurds ultimately want to steer Syria to a federal structure and to have Rojava autonomy recognized in the constitution. War is the last thing the Kurds want. They are also aware that under current conditions, they cannot think of dividing the country or setting up an independent state.

Both sides are approaching a critical threshold that evokes incendiary questions: How will the Syrian regime manage with the Kurds? What will happen to Rojava if Turkey and Syria decide to cooperate? Can the Kurds risk fighting the Syrian army?

Kurds have already taken major steps toward a state structure with a constitution, a constituent assembly, popular committees, defense and security forces, and education and cultural institutions.

At the new guesthouse of the Asayish forces in Tell Abyad, I met with Omar Alloush, the foreign relations official of Movement for a Democratic Society (TEV-DEM), which is the driving force of the autonomy process. He said TEV-DEM wants to apply the Rojava model throughout Syria.

What if that doesn’t work and it leads to war, I asked. He retreated a bit, saying, “If we cannot persuade the state, then we will turn to the people. There should be a referendum in the north and the government should accept its outcome. We don’t insist on federation or war. We are seeking a decentralized solution. We won’t accept a centralized or Baathist rule.”

Those remarks seem to summarize the determination, but also the realism, of the Kurds.

After two meetings arranged by Russians at Khmeimim air base between the regime and the Kurds, a third meeting was held in Damascus, but without any representatives of TEV-DEM and the Kurdish nationalist Democratic Union Party (PYD), the dominant forces of the region. Only the less influential groups were invited, which raised questions about Damascus' intentions.

Alloush said that was a regime tactic to avoid a solution. “The PYD was not at Damascus because it has a defined, concrete project. Other Kurdish movements were there because they have no projects. In fact, our project is more suitable to the Syrian system," he said, noting that the other groups want an independent Kurdistan. "The regime knows this, and that is why it invites parties it cannot reconcile with. The regime has reconciliation feasibility with the PYD, but the regime doesn’t want reconciliation."

Inviting only Kurds to these meetings was not realistic, as Kurds are working with other communities. I asked Iso Gweriye, the head of the Syria Union Party and a member of the Syrian Democratic Assembly, about the nature of the Damascus meeting.

“Arabs, Kurds and Syriacs listed their demands in a joint statement after the first and second Khmeimim meetings. … We are open to meet and discuss. But we received no replies. We are saying all of Syria should become a federal system,” he said.

Gweriye said the regime is flexible on some issues, such as allowing Kurds to use their native language in education and to accept that all parties are responsible for security in their areas. “Damascus thinks of expanding the power of local administrations. They agree to Asayish to serve as local police, but they don't want to discuss a comprehensive security system with them. For Damascus, the status of YPG, YPJ and Syrian Democratic Forces is not up for discussion,” he said.

He added that the future of Rojava depends on the attitudes of parties to the problem: “It is not a problem that can be solved by local forces. There can be no solution without the United States. Also Russia, Iran or Turkey cannot unilaterally bring about a solution.”

The Asayish guesthouse is a simple building constructed with local materials, including mud and stones outside the Qamishli town center. Sitting on a cushion near the fireplace is former journalist Cowan Ibrahim, the current chief of the Asayish forces.

Ibrahim, whose mother is a Kurd and father is an Arab, said that for them the Damascus regime is as much a threat as IS. He added, “Both are trying to provoke the Arab populace against Kurds."

He referred to Turkey’s intensifying threat against Rojava, saying that Ankara, together with Iraqi Kurdistan President Massoud Barzani, is trying to eradicate the autonomy movement in Rojava. Ibrahim accused Turkish intelligence services of assassinating the Kurds. “In the last three years, they killed eight PYD people. We tracked down the assassins and wiped them out by capturing 23 of them, all Arabs. We exposed their connections with Turkey,” he added.

Asayish: subject of contention with the regime

Ibrahim explained the rather informal, haphazard security in the region, which is lacking in communication and coordination among the various groups there. “We have no contacts with the regime. Let’s say one of our people is detained. There has to be someone in the middle who will enable us to contact the regime. Likewise, how is the regime going to contact us when we detain a regime policeman or soldier? Sometimes we use tribal chiefs to mediate, but we have no ready access to them," he said. "We have serious problems with unofficial, disorderly forces affiliated with the regime.”

He then touched on the Christians. “We are careful with Christians. They are peaceful. Sutoro, the Syriac [Christian] local security unit, controls two neighborhoods in Qamishli, but we have a base 100 meters [109 yards] from them. We move in and out freely. They don’t interfere. We don’t interfere with their movements. Kurdish Asayish is careful not to enter the areas the regime controls, and their soldiers stay away from our areas. If a regime soldier or police want to pass through our area, he has to not be in uniform and unarmed. Otherwise, he will be detained,” Ibrahim said.

In Rojava, not only regime police and soldiers are subject to restrictions, but also anyone who comes from outside the region. Syrians who don’t hail from the Rojava area need a residence permit if they want to live there. They must have a resident of Rojava as their sponsor. Ibrahim said this visa-type arrangement is temporary and will be annulled when the situation in Damascus changes.

Ibrahim said Asayish today has 10,000 personnel in Jazeera, 3,000 in Afrin and 2,000 in Kobani canton. Half of the Asayish personnel in Jazeera are Arabs. In Tell Abyad, there are a few Turkmens. In the entire Asayish there are 300 Turkmens. About 30% of Asayish personnel are women. Members of the force are paid $120 monthly salaries. In Syria, civil servant monthly salaries are $80 to $100, so Asayish employment is attractive.

The Syriac police force Sutoro is subordinate to Asayish, but autonomous in its internal affairs. Sutoro is represented on the four-person Asayish executive board. Ibrahim laughed: “So, they tell us what to do but we can’t tell them what to do. If they want to appoint someone, all they do is inform us, but if we want to appoint someone we have to get their approval.”

Nobody can predict where bargaining in Damascus will end, but the regime cannot forever ignore the realities of the north. The Rojava autonomy movement, if nothing else, has introduced the idea of decentralization to the Syrian regime, hence local administrations have taken small steps to develop legislation.

Things will have to change. Even within the powerful Baath structure, there is discussion of shifting from Arab nationalism to Syrian nationalism. Very few Syrians will approve Kurdish autonomy, but there are some who say the regime could learn from the experience of the Kurds.