Is Turkish military’s role in politics over?

The failed July 15 coup could be a fatal blow to the Turkish military’s political role. 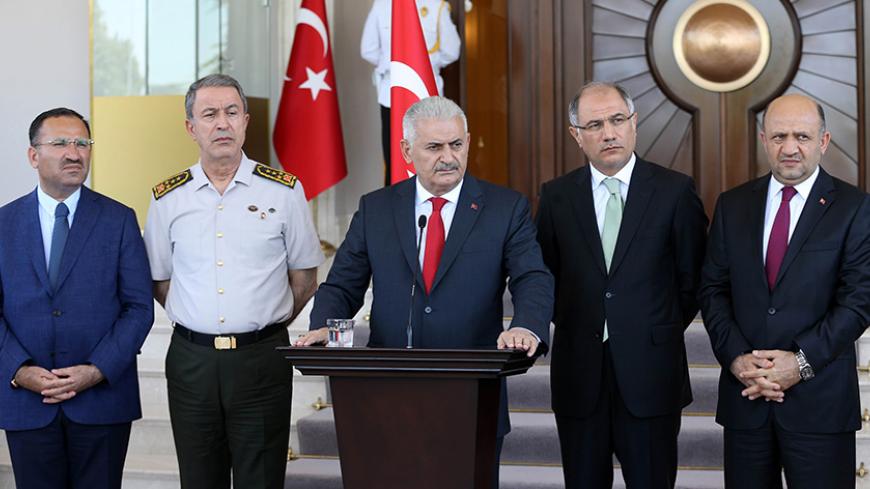 Through a state of emergency decree issued Jan. 10, the Turkish government transferred some critical powers of the chief of the General Staff to the civilian minister of defense. Although the move passed without much debate, its importance cannot be disregarded. The powers transferred constitute the nerve endings of the military tutelage that ruled over Turkey for many years. The decree concentrates military power in a single civilian office.

The previously all-powerful chief of the general staff will no longer appoint branch commanders, decide on the number of generals and admirals, set the time, location and agenda of the Supreme Military Council, or determine promotions for senior staff. These new arrangements are not the only steps taken after the July 15 coup attempt aimed at bringing the military under civilian political authority. In the immediate aftermath of the failed coup, gendarmerie were removed from the jurisdiction of the army command, and top force commanders of the army, navy and air force were detached from the chief of the general staff and put under the defense minister. Military staff colleges and military high schools were closed, and the army, navy and air force academies that train cadets to be officers were consolidated into a new, civilian-run university.

These radical moves, upending firmly established military structure and ideology, are not only in response to the failed coup but are also designed to forgo the possibility of another such attempt. The ruling AKP has been nibbling at the autonomous, audit-free role of the military since 2004. This time the target is the command mechanism and the purpose is to diffuse the concentration of military power and ensure civilian control of the army. This, however, is only one element of the AKP's strategy, the other being the unprecedented purges.

On Dec. 6 Defense Minister Fikri Isik announced, “Up to today 5,574 Turkish Armed Forces [TSK] personnel have been discharged and 989 have been suspended.” The total has since risen to 6,000 discharged. Since July 15, 42% of admirals and generals have been discharged, decreasing their number from 358 to 206. Some 16,000 military cadets have been dismissed from military schools. The dismissal of 248 pilots from the air force and the resulting personnel deficiency is but one example of how the military’s missions are in peril.

Turkey's military has sustained heavy blows to its image and reputation and is now being punished. Its traditional functions are being challenged. When it comes to the political role of the TSK, the question that needs to be asked is did the traditional function of the armed forces — endowed through the legacy of an empire, a military republic and oversight of the country's politics — end with July 15?

It may seem paradoxical to answer this question with an outright yes based solely on the military's current appearance and perceived dynamics. Although the blow to the military has been hard and deep, its tradition of interventionism is at least as strong and deep. No one can deny that between the demilitarization process that began in 2003 and the measures adopted after July 15, civilian-military relations in Turkey are shifting to civilian values. This is, however, all relative.

One has to remember that six months ago, a group in the military attempted a coup in a country negotiating accession to the European Union. That group was not limited to officers affiliated with the US-based preacher Fethullah Gulen. There were other officers waiting in the wings. Many observers believe that had the Gulenist officers succeeded with their coup, many others would have joined them.

Ilker Basbug, retired chief of the general staff, has spoken of three key groups in the military. On CNN Turk, he said, “The key group that planned and commanded the July 15 uprising was the [Gulen] movement. The second group is made up of those who did not carry out their assignments in it, those who hesitated. The third group, although they are not part of the [Gulen] movement, would have liked to have benefited from it.”

Retired military prosecutor Ahmet Zeki Ucok, who first exposed the Gulenists in the army and who had issued warnings about a potential coup attempt, made an interesting and damning comment: “If they had captured the president on July 15, the command echelon would have legitimized the coup by declaring that it had been conducted by the chain of command.”

What risks should be of future concern? The first area is political trends in the military today. What are the fault lines? If one takes into account the ability of the Gulenists to infiltrate the TSK and its clandestine structures, it would not be far-fetched to say that they remain the major group in the TSK today. Ucok, in his recent book, claims that the Gulenists, with 50,000-60,000 adherents, constitute one-third of military personnel. Not to be forgotten are the 3,000 officers still under investigation and 20,000 people dismissed from the TSK and military academies who know how to handle a gun.

The second group in the TSK is the one nearer to the Kemalist-nationalist line of thought. They emphasize restructuring the TSK, being alert to the Gulenist threat and struggling against separatist pressures they see as originating from the West, especially the United States. In this regard, they are aligned with the AKP. They support the AKP on the Kurdish issue and in dealing with the West, and also believe that Turkey is in the midst of a second independence war. They think terrorist acts in Turkey are controlled by a single source (which they refer to as "the Mastermind") and that the United States was behind the July 15 coup attempt. For them, President Recep Tayyip Erdogan represents the unity of the state and society.

The third major group consists of the legalist officers who subscribe to the institutional role of the TSK. Although they are not politically active, they are most concerned about the TSK and the country's future.

Naturally, where there are so many divergences and alliances, there will be politics as well. Relations between these groups are a serious risk element. All one has to do is look at the time before July 15 in recalling the plots and counterplots in the military that shook the institution to its roots.

The second area of concern is the relationship between conservative politicians and nationalist-Kemalist officers who are currently in what appears to be a strong alliance that will determine the course of the country. Can they maintain their alliance?

Stability, a balanced and sustained foreign policy and an institutionalized democratic order may actually end the military’s political function. If the opposite happens, however, with the gates that July 15 opened, the TSK’s traditional instincts might create risks. Instability, polarization and foreign policy crises may well lead to domestic upheavals and provoke the military to try to resume its political role. That could be fatal for Turkey.