At Tunisia's third Truth and Dignity Commission, many young speakers testified about human rights abuses that occurred during the 2011 revolution and continue to this day. 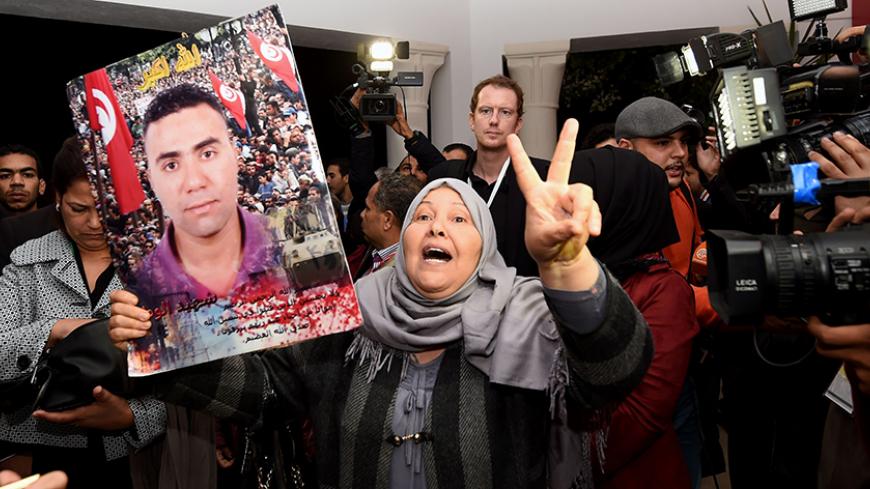 A Tunisian torture victim's mother carries her son's portrait as she arrives for a hearing before the The Truth and Dignity Commission in Tunis, Tunisia, Nov. 17, 2016. - FETHI BELAID/AFP/Getty Images

On the sixth anniversary of Tunisia’s revolution that ousted dictator Zine El Abidine Ben Ali, Moslem Kasdallah — a heavyset young man with braces — gave his public testimony. As he described being shot by police officers while patrolling his neighborhood during the long nights of the revolution in January 2011, sweat dripped down his face. His leg — which was riddled with bullets, required 32 operations and was almost amputated — was hidden under the table.

“I am ready to sacrifice all my body — be it that I give my other leg and walk on no legs at all,” he said passionately.

Kasdallah was the first speaker at the third Truth and Dignity Commission event, which took place on Jan. 14 in a northern suburb of Tunis. The commission, which was set up in 2013 following the drafting of Tunisia’s new constitution, was tasked with documenting human rights abuses in the country’s post-colonial history. It has collected over 62,000 testimonies from across the country.

The Truth and Dignity Commission is investigating abuse claims stretching back to the 1950s, and earlier hearings were marked by gruesome testimonies detailing abuse by the state apparatuses of Ben Ali and President Habib Bourguiba. But the wounds were remarkably fresh at this weekend’s event, which focused on victims of the revolution. Khaled ben Nejma, who testified with his mother, was shot in the back and chest at a peaceful protest in Bizerte on Jan. 13, 2011. Now wheelchair bound, he had not left his house for three months prior to the hearing.

Tunisia is often labeled a success story of the Arab Spring, as it largely avoided the violent political turmoil that has engulfed its near neighbors. And the country has seen many successes: a relatively peaceful transition of power, elections, a new constitution and sustained engagement from civil society resulting in a Nobel Peace Prize. But on the day of the hearings, protesters clashed with police around the country.

For many Tunisians, the original aim of the revolution — economic opportunity — has not been met. The southern towns of Ben Gardane and Gafsa, as well as Sidi Bouzid, where the revolution was originally sparked by a street vendor setting himself on fire, were rocked by protests on Saturday. Tensions between unemployed citizens and the police have been festering for the past several years, particularly in the underdeveloped southern and central parts of the country.

At the hearings, none of the young men who testified seemed to think Tunisia’s revolution was complete. Several of them spoke of seeing the officers who abused them still on active duty. “As long as the perpetrators are not brought to justice, the goals of the revolution will not be complete,” said Kasdallah.

The Truth and Dignity Commission would like to have hearings for the perpetrators as well, and there have been hints that certain officers would like to testify to publicize their sides of the story. However, the commission is not a criminal court, and for the victims, the value of speaking is largely cathartic. “Justice is the essence of humanity,” said the mother of Rached Arbi, who was shot in the chest at close range in January 2011, noting that she had been waiting “a very long time” to share her experience.

The Tunisian government itself, however, has shown little interest in the victims or the hearings — at Saturday’s event, the only high-profile politician in attendance was Tunisia’s former President Moncef Marzouki. No one from Nidaa Tunis was present.

With tears in her eyes, Ben Nejma’s mother pleaded with the Tunisian government. “Is there a chance that my son could live in decent conditions? Is this asking too much? Just one home for a disabled person who has given his blood?” she cried, her voice cracking.

But it’s unlikely the victims will see justice anytime soon. “I think it will be [a] laborious year to make the victims’ dignity prevail above any political discussion,” Salwa El Gantri, the head of the International Center for Transitional Justice Tunisia Office, told Al-Monitor via email.

Despite the victims’ physical and psychological scars, a ripple of optimism could be felt at the hearings. “We have been destroyed, but not entirely,” said Arbi near the end of his testimony. “The revolution will continue.”