A media company in the Gaza Strip has announced Palestine's first comedy festival to be held in March. 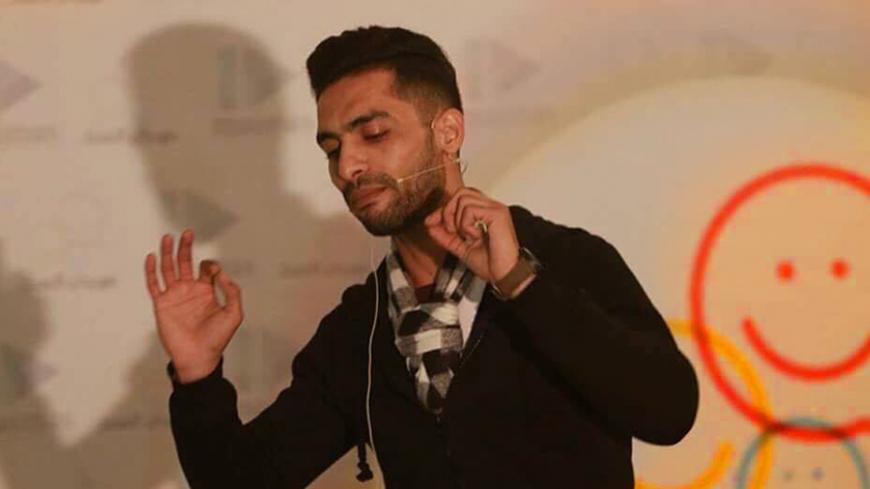 Hesham Adnan, one of the comedians who appeared at a ceremony to announce an upcoming Gazan comedy festival, performs on stage in this picture posted to Facebook on Dec. 31, 2016. - Facebook/Hesham Adnan

GAZA CITY, Gaza Strip — A media production company has decided to host the first comedy festival in the Gaza Strip.

At a launching ceremony held Dec. 29 at Rotus restaurant, Maimas for Media Production formally announced the planning of Gaza's first comedy festival to be held March 2017.

The ceremony, which the organizers offered as a positive end to a difficult year for Palestinians in Gaza, included theatrical performances and comedy shows by five Palestinian comedians and live bands.

The ceremony featured a short performance by famous Korean stand-up comedian Wonho Chung, who speaks fluent Arabic. In a previously recorded video, Chung expressed his admiration for the residents of the Gaza Strip, praising their steadfastness in the face of the siege and harsh living conditions and saying that comedy and laughter are powerful ways to ease the pain and grief of everyday reality.

Chung said he will participate in the comedy festival and expressed hope that the shows will bring smiles to the sad faces of the people of Gaza.

The five Palestinian stand-up comics interacted with the audience and provoked laughter. One of them, Hesham Adnan, told Al-Monitor, “It is a nice opportunity to conclude 2016 with [the announcement of] a comedy festival, the first of its kind in Palestine.”

He said that the Gaza festival will be similar to comedy festivals organized across the capitals of the Arab world, such as Marrakech in Morocco, and it will specifically attract young participants. “The comedy festival is an opportunity for the youth to discover their talents and practice their hobbies. The Gaza Strip is full of young talent,” he said.

He added, “I felt how much people in Gaza needed to laugh to escape their bleak reality.”

Adnan said that the ceremony was a good start for the project and expressed hope that in the coming years, increasing numbers of Arab artists will be able to participate in the Palestinian festival, and through it more Palestinian artists will get the opportunity to be heard.

Palestinian Culture Minister Ihab Bseiso said in a video interview during the event that the Palestinian people have the right to make their voices heard across the world. He said he considers laughter a form of resistance and a way to face reality armed not only with irony but also a sense of hope and determination.

“We are very proud in besieged Gaza to be able to make a breakthrough in the cultural scene under the blockade, with which Israel is trying to separate us from the rest of Palestine,” Bseiso said. He added, “The launch of the comedy festival, which came to end 2016 on a high note in spite of all the suffering and pain, carries an important message that our people are able to create hope for the future.”

Israel's blockade on Gaza has been ongoing since 2006. According to World Bank data, Gaza suffers from one of the world's highest unemployment rates, spiking in the third quarter of 2016 to 43.2%.

Israel has waged three recent wars on Gaza. The first was in 2008, the second at the end of 2012 and the third in July 2014, killing and wounding hundreds of Palestinians and resulting in the destruction of thousands of houses. UNICEF reported that among the 900,000 children living in Gaza, more than 373,000 are in need of psychological and social aid.

The director of Maimas for Media Production, Mahmoud Madi, said the festival will be a stand-up comedy show. Madi told Al-Monitor that its main goal is to call attention to the Gaza Strip and relay a message: “This geographical piece of land is full of life, culture and art. Its people deserve to have festivals, to laugh and to entertain themselves.”

Madi added that the festival will be modeled on others in Marrakech, Algeria and Dubai. He said the festival, scheduled for the beginning of March, will attract participants from across the Gaza Strip and applications to participate can be submitted via a website that will be launched soon. Madi stressed that entry fees will be minimal and the festival will be widely accessible to the Palestinian public.

The organizers are planning to make the festival an annual event in the Gaza Strip, with the participation of Arab and international stand-up comedians.