Knesset member Ksenia Svetlova of the Zionist Camp told Al-Monitor in an interview that she still believes a diplomatic agreement with the Palestinians is the only solution and that Israelis must realize that there is no way to totally end terror acts. 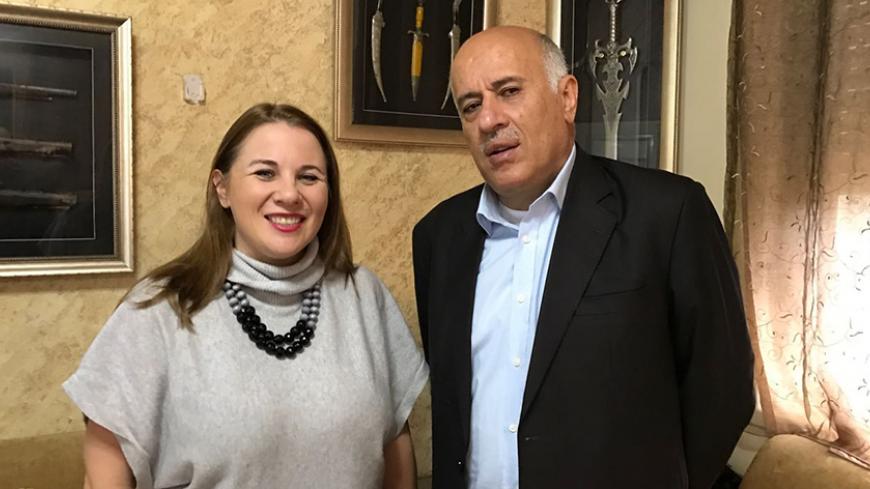 Knesset member Ksenia Svetlova of the Zionist Camp met with senior Fatah official Jibril Rajoub in Ramallah on Dec. 30. At this moment, when Israel and the Palestinian Authority (PA) are on a collision course and far from even talking about renewing negotiations between them, a meeting between an Israeli Knesset member and a close associate of Palestinian President Mahmoud Abbas is no trivial matter.

The meeting took place at the request of Rajoub, who sought to send a message to the Israeli political establishment and the Israeli public. Before entering politics, Svetlova was a respected journalist on Arab affairs at the Russian-language Channel 9. She knows the conflict with the Palestinians well and is currently a member of a party that espouses the two-state vision.

It was clear to Svetlova that the conversation took place with the knowledge and blessing of Abbas, and she left it with the understanding that the Palestinian leadership is interested in returning to the negotiation table. According to her, despite their accomplishments on the diplomatic front, such as UN Security Council Resolution 2334, the PA understands that the Palestinian public is worn out and eager to change the situation on the ground. In a Jan. 10 interview with Al-Monitor, Svetlova said, “I have long-standing contact with Jibril Rajoub, from the time I was a journalist. I believe it’s important to keep channels open. This time I heard far more conciliatory things from him.”

Rajoub's message to Svetlova accords with Shlomi Eldar's Jan. 10 report that the Palestinians have accepted the possibility of the US Embassy moving from Tel Aviv to Jerusalem, and that they do not intend to resist if this plan does take effect.

Svetlova knows the limits of her influence as a member of an opposition party for which polls predict complete collapse at the next election, and is well aware of the Israeli left’s failure in recent years to convince the Israeli public that negotiations with the Palestinians are essential for the continuation of Israel as a democratic nation. But she believes that now, with the great despair among supporters of the two-state solution and uncertainty leading up to President-elect Donald Trump’s entering the White House, is the time to renew negotiations.

The Jan. 8 truck attack that killed four Israeli soldiers in the Armon Hanatziv neighborhood of Jerusalem sharpened Svetlova’s sense of urgency to renew the diplomatic process. “The threats and home demolitions don’t truly deter young people who are brainwashed with pure hatred. The only thing that could improve the State of Israel’s security and diplomatic situation is movement toward a diplomatic agreement that would guarantee security borders recognized by the world and a separation from the Palestinian people.”

If it were up to her, Svetlova would change the strategic direction of her party, which since the election has been in the opposition, with little ability to influence the public opinion or government decisions, and is losing voters to Yesh Atid. But in the meantime, she’s doing everything she can to convince her party members and fleeing voters that things can be different.

“I’m part of a camp that believes in a diplomatic solution, and I understand that we’ve failed to explain our position. I travel around the country and hear people tell me: ‘How can we believe you? See what’s happening all around us. There’s no one to talk to. Abbas is collapsing, the terror attacks continue.’ I truly understand them. The Oslo rhetoric of peace with the Palestinians and an end to the conflict is no longer relevant, yet in my camp they continue to use it.”

According to Svetlova, a change in the public opinion will begin when her camp stops selling illusions of a peace that will end the violence and describes reality as it is. “We’ll start from that we must change the rhetoric and talk about an agreement, separation, an outline of a plan that would improve the personal security of Israel citizens and Israel’s diplomatic situation. You can’t promise that after a diplomatic agreement terror organizations will stop operating. On the contrary. It may be that they would be motivated to damage the new arrangement. I want to tell the truth: It seems we’ll always have terror attacks here, but with an agreement we’ll have much fewer.”

Svetlova argues that to convince the public that a diplomatic agreement is a critical Israeli interest, the left has to change its approach and stop trying to sell the end of the conflict as a world free of terrorism and incitement. “We have to explain what will happen if there’s no agreement: a situation where we’ll continue to rule over a population that doesn’t recognize our authority. We must explain how many resources will we have to invest in security and educating people who don’t want their enemies educating them. The 28-year-old terrorist at Armon Hanatziv is the perfect example of a young man who was born and lived between the first and second intifadas and had nothing to lose. This frustrated generation is not interested in being educated by another state, and this situation has no future and efficacy beyond the deepening and worsening of hate and hopelessness that lead to suicide attacks from a population that lives among us.”

In her many lectures and public appearances, Svetlova lays out a pragmatic diplomatic worldview that sees reality as it is. As an expert in Arab affairs who has investigated the topic and covered the Arab Spring, its promises and disappointments, she argues that even after a diplomatic agreement, the tension between Israel and Islamist elements won’t disappear. “The terror organizations that came out of the school of the Muslim Brotherhood or al-Qaeda will continue to exist and will continue to try to attack in fear of losing their hegemony. But if we don’t give up, and stubbornly strive to implement the agreement, their power will weaken, and in the long term their influence will diminish significantly.”

Svetlova makes no promises of a utopian world. “According to the examples of Egypt and Jordan, with which we have peace agreements, we see that incitement and hatred don’t stop. For the Salafist jihadist elements, the occupation is irrelevant. They have a higher cause: They believe that all Jews and Christians are enemies of Allah, and that they must continue an existential struggle against them until they all convert to Islam. The peace agreements with Egypt and Jordan are not exactly peace, but they are important agreements that are good for all sides and that’s what we have to strive for.”