Did Netanyahu plot with his enemy?

Attorney General Avichai Mandelblit might soon be confronted with a decision whether or not to indict Prime Minister Benjamin Netanyahu for receiving favors and benefits, including from the latter's arch-nemesis Yedioth Ahronoth publisher Arnon Mozes. 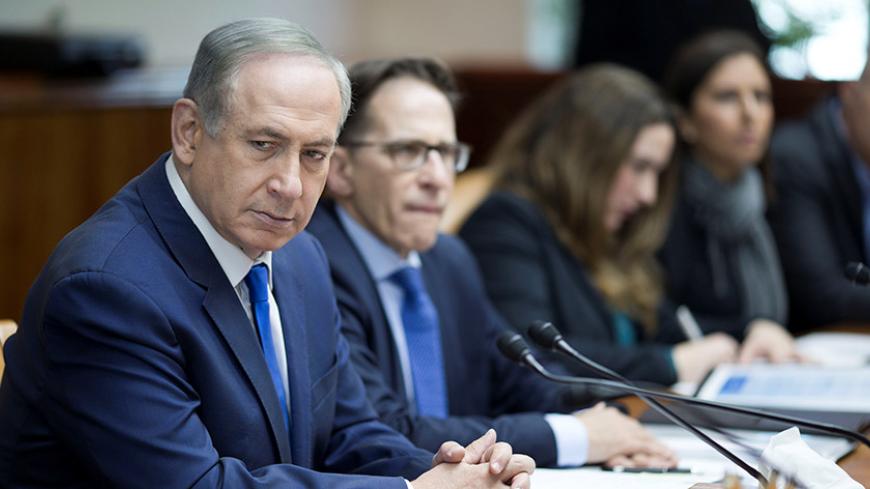 Over the past few years, Israeli Prime Minister Benjamin Netanyahu has marked one particular individual as the arch-nemesis of his rule: Arnon Mozes, the publisher of Yedioth Ahronoth newspaper. In Netanyahu’s world, Mozes is the ultimate demon, more than Zionist Camp leader Isaac Herzog or head of Yesh Atid Yair Lapid, and much more than Iran, the Palestinians or any other existential danger facing Israel. Mozes is the prime target, against whom Netanyahu fires off a paranoid, verbal barrage on a regular basis.

In 2015, Netanyahu started referring to Mozes by his nickname “Noni.” He posted about him on his Facebook page, with anyone who tried to undermine Netanyahu referred to as a “Nonist.” All who agreed to listen would be treated to a detailed account of how all the prime minister’s problems, haters and enemies could be traced back to that same mysterious “Noni.” After his stunning victory — against all the odds — in the 2015 election, hundreds of Likud supporters surrounded Netanyahu during his victory speech, chanting in a loud roar, “Oh! Ah! What happened now? Noni Mozes had a cow!” Not Herzog. Not Lapid. Noni.

For several weeks now, more and more information about police probes against Netanyahu has been revealed. This past week, it became clear that the mysterious businessman with whom Netanyahu engaged in long, corrupt wheeling and dealing was none other than Noni Mozes. The “deal” they reached could be seen as little more than a bribe. Israel was in shock. In terms of dramatic political developments, it may even have been unprecedented. It suddenly became clear to everyone that somewhere behind the scenes of this formidable political and economic rivalry, Netanyahu was engaged in intense negotiations with Mozes over a package deal. Mozes would tone down the Yedioth Media Group’s hostile coverage of Netanyahu significantly, and in exchange, Netanyahu would take steps to advance a law to prohibit the distribution of Israel Today at no cost. Israel Today is the free newspaper funded by Netanyahu’s patron, billionaire Sheldon Adelson.

The two men engaged in a long series of talks, which were recorded without Mozes knowing about it, by Netanyahu’s Chief of Staff Ari Harow. It is worth noting that Harow is also suspected of involvement in another incident, which calls Netanyahu’s ethical behavior into question.

For the first time in years, the threat this poses to Netanyahu’s rule is tangible and real. An inquiry, which lasted 10 months, evolved into a criminal investigation, sending shock waves through the political system and media. It has created a critical mass that could eventually lead to Netanyahu’s removal from politics and a change of government in Israel.

Details about the scandal that came out over the past few days reveal a murky world, driven by passion and overshadowed by conflict and rivalries. It is the kind of world normally found in TV series such as “House of Cards” or even “Game of Thrones.”

The story of this corrupt wheeling and dealing between Netanyahu and Mozes is just the tip of the iceberg, reflecting the behavior of Netanyahu and his family over the years. And yet, even though the media reports frequently on these incidents, none of them has ever led to police involvement. Now, however, even that dam has burst. Over the past few months, the police have investigated dozens of members of Netanyahu’s inner circle, including several billionaires such as Ronald Lauder (who testified in a facility operated by Israel elite police unit Lahav 433) and veteran film producer Arnon Milchan. Now the police want to interrogate Australian billionaire James Packer, too. Over the past year, Packer has become close to Netanyahu's family, and particularly to Netanyahu’s son Yair, who is frequently described as the prime minister’s official heir.

In the case of Milchan, evidence has been found that he provided Netanyahu with expensive cigars, pink champagne and all sorts of other high-quality alcoholic beverages. In some instances, he had couriers deliver the gifts to the Netanyahu family residence. At other times, he brought the gifts there personally. The police found that Milchan was in the possession of a receipt for over 400,000 Israeli shekels ($103,700) for these purchases, made at the request of the Netanyahu family. The Netanyahu family has long been known for its extravagant lifestyle. Now these extravagances are at the center of a fastidious police investigation, and the picture that is emerging does not bode well.

The question is whether all these revelations and reports will convince State Attorney General Avichai Mandelblit to indict Netanyahu once the investigation is concluded. The way things look now, the announcement of an indictment is not unreasonable. On the contrary, Mandelblit will have a hard time defending this kind of lifestyle and habits. The crooked exchange between Netanyahu and Mozes, which will eventually make its way to the Israeli public, will provide the attorney general with the ethical coverage that he needs and the justification to go ahead with an indictment, despite all the anticipated attacks from the right.

Should that happen, the question will be how Netanyahu will respond. According to Israeli law, the prime minister can continue serving in that capacity even after he is indicted. He is only required to resign once his conviction is incontrovertible. At the same time, however, a 1993 Supreme Court ruling in the case of Minister Aryeh Deri states that any minister who is indicted must resign. Since this is, apparently, an overriding ruling, Netanyahu will have a hard time holding on to his seat once he is indicted — if he is, in fact, indicted. Should that happen, all eyes will turn to Finance Minister Moshe Kahlon, the leader of the Kulanu Party, which has 10 Knesset seats. Kahlon could repeat the same thing that former Minister Ehud Barak did in 2008, when he showed Ehud Olmert the door and forced him out of the prime minister’s office under similar circumstances.

Regardless of what actually happens, Netanyahu is now caught in the midst of the most challenging fight of his political career. He may be teetering on a perilous incline, but he has already proved time and again that he has what it takes to extricate himself from even the slipperiest of slopes.