Who's behind Russian diplomat's murder in Ankara?

Turkish officials are seeking the true motive behind the slaying of Russian Ambassador Andrei Karlov at a public event in Ankara Dec. 19. 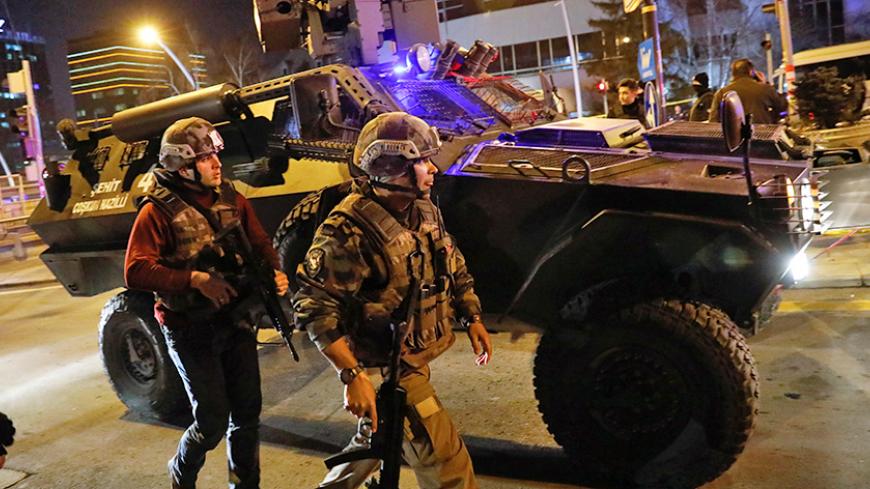 The Dec. 19 assassination of Andrei Karlov, Russia’s ambassador to Turkey, could have come straight out of a Terrorist 101 handbook — and perhaps it did.

The authorities are examining potential motives for the slaying, including the possibility that the assassin was a Gulenist pretending to be a jihadist.

Karlov was assassinated in Ankara while attending a photo gallery opening. The assailant was identified as Mevlut Mert Altintas, a 22-year-old off-duty riot police officer who was shot dead by his colleagues.

The ambassador had served in Turkey since June 2013 and was well known in Ankara as a kind, hospitable and soft-spoken man. He skillfully rode the tides of high tension between Ankara and Moscow before being recalled from Ankara after the Russian plane was shot down in November 2015. Having just returned a couple of months ago, Karlov was seen as Russia's most crucial interlocutor in Turkey.

Senior bureaucrats in Ankara had spent sleepless nights negotiating with the Russians, with Karlov playing a key role and earning the respect of all. He is the first Russian ambassador to be murdered since 1927, when Pyotr Vaykov was killed in Warsaw, Poland, and the first assassination of an ambassador in Turkey since that of Israel's consul general Ephraim Elrom in 1971.

Altintas chose the ideal setting for the assassination: There were at least 100 people present, some of them journalists, and it was captured on video. Right after the shooting, Altintas had the stage all to himself and started his rant with a line from a well-known al-Qaeda nasheed, or poem. It can be translated as, "We are the ones who obey the call of jihad." His Arabic was difficult to decipher. It seems he had barely memorized the line and could not continue in the heat of the moment. Yet, the nasheed says, "We only aim for martyrdom, and our constitution is the Quran, the source of our pride."

Then he screamed, “Allahu akbar" ("God is great”) and switched to Turkish: "Do not forget Aleppo. Do not forget Syria. Unless our towns are secure, you will not have security." He warned the private security guards of Cankaya municipality to back off and said he would not be taken alive. All this time, sadly, Karlov lay on the ground bleeding.

Immediately after Karlov and the assailant were pronounced dead, the first questions arose: Who was the assailant, or more specifically, what was the force that drove the young riot policeman to organize such a high-profile act of terror?

Al-Monitor spoke with senior intelligence and security officers in Ankara to get the latest information that has not yet been released to the press. Here is the summary of their immediate findings:

First, the assailant had attended the Fethullah Gulen movement's prep schools for years. Turkey blames the movement for the failed coup in July.

Most pro-Gulen social media users were too eager to suggest the assailant was a member of Jabhat Fatah al-Sham or another al-Qaeda offshoot operating in Syria. Their enthusiasm was matched only by jihadists’ around the globe and Gulf states.

The Turkish authorities revealed that the assailant had taken two days off beginning the day of the July coup attempt, which has become a signature of Gulenists. In addition, most of his police academy classmates from 2014 and his bosses had already been either fired or imprisoned for allegedly being members of the Gulen movement.

One cannot help but wonder why Altintas was still an active duty officer, given the government’s mass purges of suspected Gulenists. A senior bureaucrat in Ankara told Al-Monitor, “We are still not finished with our operations against the Gulen organization. Only yesterday [Dec. 18], 500 members of the armed forces were detained. This is an invasive organization with an incredible outreach. We have not yet reached every member.”

High-level bureaucrats said immediate searches of the assailant’s home and a check of his electronic devices revealed he had several copies of Gulen publications. He also had communications with several users of ByLock — an encrypted smartphone app used by Gulen members — yet not one connection to a jihadist network was detected.

He had watched a few Jabhat Fatah al-Sham videos a couple days before the assassination. It may have been in preparation for his performance as an Islamist. His accent aside, Altintas raised his left index finger calling "Allahu akbar," which is a no-no for even a novice jihadist. Tawheed, unity in God, is symbolized with the right-hand index finger raised. At least on the video, to a well-trained eye, Altintas appears as a wannabe jihadist.

Turkish intelligence had picked up on intensified chatter about Russian attacks against Chechens after Dec. 13, when the BBC published a documentary about Russian gunmen allegedly killing Chechen resistance fighters in Turkey while the Turkish government looked the other way. Was this a response by the deep state to prove to the Chechens that Turkey did not sell them out?

Al-Monitor spoke with Murat Ozer, the chairman of the nongovernmental organization Imkander. Although he was not mentioned in the BBC piece, Ozer had provided assistance for the BBC correspondent during the summer. He told Al-Monitor he was curious as to why the piece was published months later, when relations had improved between Turkey and Russia.

Ozer is not known to mince his words. He said, “Russia has committed atrocities against Turkmens and [in] Aleppo along with other locations in Syria in the last year. If this attack [had] happened during those days, then an Islamist motivation could have been debated. … But now, when Turkey and Russia have reached an agreement for Aleppo, almost bypassing Iran, why would an Islamist do this?”

Ozer, like some other Islamists in Turkey, is not convinced the assailant was an Islamist. Indeed, the idea that Chechen Islamists were behind the attack remains unsupported so far.

Turkish authorities also posed a similar puzzle. A Gulenist air force pilot had shot down the Russian plane in November 2015 — just when Turkey and Russia were about to reach an agreement on Operation Euphrates Shield. Now again, a similar pattern is observed: An attack took place just as the cease-fire was being reached and the Turkish foreign minister was en route to Moscow.

Overall, though, one cannot help but question the security deficiency that facilitated the assassination of an ambassador in the heart of Ankara. Some members of Turkey’s ruling Justice and Development Party were wild enough to blame the victim for not having a proper security detail. But except for Israeli and American diplomats and an occasional Turkish politician, all others travel in Ankara without bodyguards.

For this event, Turkish officials told Al-Monitor, Russia had rented the hall and officials from Cankaya, the central district of Ankara, made all the arrangements. However, the district failed to inform the Interior Ministry about the event. The district's own unarmed security guards carried out a basic identity check, which the assailant passed smoothly with his official ID card. Had Cankaya officials informed law enforcement, the assailant’s armed entry into the gallery could perhaps have been prevented.