The federal budget widens the gap between the Kurdish political parties, as some of them supported it strongly and others rejected it, calling for amendments. 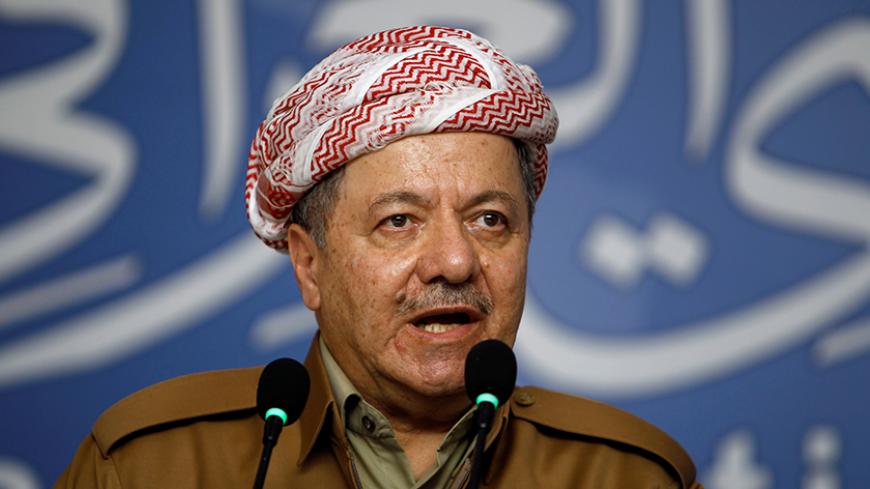 ERBIL, Iraq — On Dec. 14, the Kurdistan Regional Government (KRG) rejected the federal budget for 2017. The government’s statement read, “The budget does not serve the KRG,” and stressed its refusal to abide by the budget, describing it as “a serious political conspiracy against the KRG.”

The Iraqi parliament had voted on the federal budget on Dec. 7 amid intense disputes between the Kurdish parliamentary blocs.

The parliament approved the proposals submitted by four Kurdish blocs — Patriotic Union of Kurdistan (PUK), the Gorran (Movement for Change), the Kurdistan Islamic Group and the Kurdistan Islamic Union — to include specific clauses obliging Baghdad to deliver the KRG’s share of the budget, amounting to 17% of the total actual spending of the budget. In exchange, the KRG would be required to export 550,000 barrels of Kirkuk oil and KRG oil every day, exclusively through Iraq’s State Oil Marketing Organization (SOMO).

After the vote, the Kurdistan Democratic Party (KDP) withdrew from the session because the demand it had officially made through the KRG, to reconsider the budget’s articles about the KRG, had not been taken into account.

This disagreement is an extension of the deep-rooted division between the political parties in the KRG over the presidency and political partnership issues. As a result of this conflict, the KRG parliament has been disrupted and the political process has been paralyzed for more than a year now.

It is safe to say that there are two visions when it comes to managing the KRG. The KDP aims to achieve a kind of sovereignty in terms of selling Kurdish oil itself, and it aspires to become politically independent after achieving economic independence. However, the other four parties that voted in favor of the budget tend to believe that dealing with Baghdad to export oil through SOMO would be a solution to pay the employees’ salaries, without giving much attention to political or economic independence, which reflects a lack of trust between them and the KDP.

After voting on the budget, Aram Sheikh Mohammed, the deputy parliament speaker, along with the four Kurdish blocs praised the changes in the final version of the budget and the gains they achieved in the budget, describing them as a major accomplishment that serves the Kurds and ensures the salaries of employees and the peshmerga forces.

However, KDP members noted that the budget was unacceptable and harms the Kurds’ interests. In the same context, the KRG announced its rejection of the proposal submitted by the four blocs, noting that it will not abide by the budget’s provisions because it does not serve the people of the KRG.

After this long tug-of-war, the KRG’s presidency issued a statement Dec. 8 calling on the Kurdish blocs in Baghdad to meet with the KRG premiership in order to discuss this issue, noting that “the paragraph about the peshmerga [allocations of their salaries] was vague, and this whole issue should be thoroughly studied in order to serve the people of the KRG.”

Al-Monitor contacted Mohammed Ali, the head of the Movement for Change’s political division, and asked him about the likeliness of the meeting being held. Ali questioned the seriousness of the call and said, “First, had the KDP been keen on the Kurdish unity, they would not have abandoned Baghdad. Second, before calling for a meeting, the KRG government rejected the budget when they should have taken a step back. Amid this negative atmosphere, I do not see any suitable platform for the meeting.”

On the other hand, deputy head of the KDP in the parliament Tariq Rasheed told Al-Monitor, “Our bloc withdrew as an objection to an expression in the fifth paragraph of Article 9, which vaguely refers to the peshmerga forces dues, knowing that these forces are constitutionally recognized. Also, these forces are battling IS [the Islamic State] in an area stretching more than 1,000 kilometers [621 miles], but [the parliament] unfortunately decided to set a budget for the Iraqi army and the Popular Mobilization Units and opted to leave the peshmerga on the sidelines. When our observations were not taken into account, we opted for boycott — a patriotic stance that had to be taken.”

Asked if they might respond to the meeting, he said, “The Movement for Change and the Kurdistan Islamic Group are not likely to respond, and the PUK will thus opt for silence.”

Asked about the Islamic Group's position on the same subject, member of parliament Zana Saeed told Al-Monitor, “The KDP is now going through a serious crisis alone, particularly in its relationship with the PUK, which was an integral partner in the KDP policies, but things have changed. They are supposed to wake up rather than garner secondary forces around themselves.”

Former member of parliament Aso Karim told Al-Monitor, “The actions of the Movement for Change and its allies are aimed at placing further pressure on the KDP, and these actions go in line with the conflict between [former Prime Minister Nouri al-] Maliki and [Prime Minister Haider al-] Abadi.”

As a sign of the KDP’s disregard for the pressure placed by the four parties through the federal budget, an annual conference for the KRG oil and gas was held in London on Dec. 5 with the support of the Ministry of Natural Resources. This shows that despite the increasing crises it is facing, the KDP is proceeding with its current policies toward further autonomy.

As such, the possibility of these blocs responding to President Massoud Barzani’s call is very weak. While the Movement for Change sees in Baghdad an appropriate body to increase pressure on the KDP, it is pursuing a random policy based on reactions rather than a national strategy. Not only does this pose a risk to the KDP, but to the Movement for Change and the Kurdish cause as a whole.