Why Erdogan-Trump honeymoon may be short-lived

Donald Trump’s victory is welcomed by President Erdogan and his supporters, who say this could be the start of a new beginning in ties. Is that really the case? 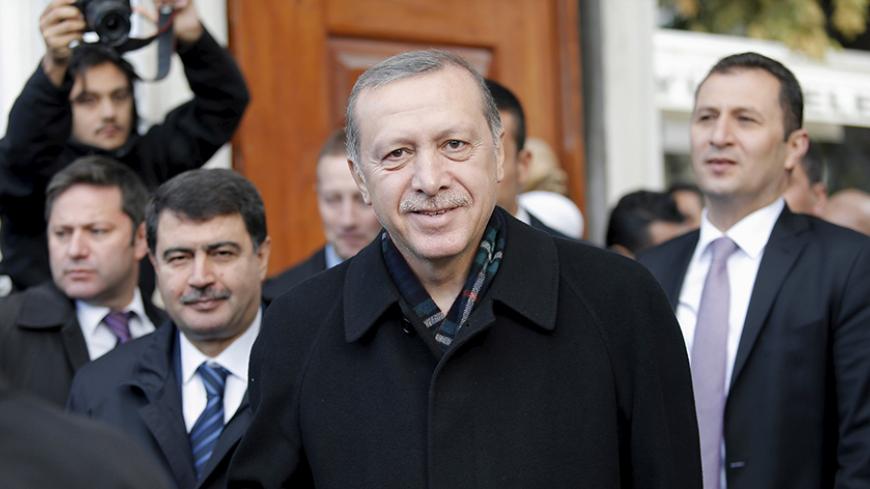 Donald Trump’s election as president may have sent shock waves across the world, leaving many countries deeply concerned, but it has had the opposite effect in Turkey. President Recep Tayyip Erdogan and the ruling Justice and Development Party (AKP) are pleased with this turn of events.

Remarks by Trump to The New York Times in July, where he praised Erdogan for foiling the July 15 coup attempt and suggested that instead of criticizing Turkey, the United States should consider the state of its own civil liberties, are also being recalled with pleasure in Ankara.

Erdogan has little sympathy for President Barack Obama, who openly criticized the deteriorating state of democracy in Turkey and appeared reluctant to extradite Fethullah Gulen, the Islamic cleric accused of masterminding the July 15 coup attempt. Obama’s policies in Iraq and Syria, which did not match Ankara’s expectations, were also a source of aggravation for Erdogan.

Erdogan’s first reaction to Trump’s victory was welcoming. Addressing a business forum in Istanbul on Nov. 9, he said that a new era was opening with America’s choice, and he wanted to consider this an auspicious occasion.

Erdogan was also among the first to congratulate Trump. Traveling back from a visit to Belarus over the weekend, Erdogan told reporters that he had invited Trump to visit Turkey on one of his first visits abroad.

“He will be assuming the presidency on Jan. 20, 2017. If possible we could also meet before that date. During our phone conversation we both said we would be pleased to meet at the shortest possible time,” Erdogan said.

He added that statements from Trump’s team on Syria and Iraq also showed similarities with Turkey’s positions, especially with regard to the need for a no-fly zone in Syria. Erdogan did not waste the opportunity to hit at Hillary Clinton either.

“Trump did not take money from FETO [the so-called Fethullah Gulen Terror Organization, a term Ankara uses to refer to Gulen followers]. … As for the other side, I got reports that they received money from that organization,” Erdogan said. He was referring to claims that the Gulen camp had donated $2 million to Clinton’s campaign.

Ankara also holds a grudge against Clinton for promising to arm Syrian Kurds considered by Ankara to be terrorists. But the extradition of Gulen is clearly going to remain a key issue in Turkish-US ties. This was also plain to see in Prime Minister Binali Yildirim’s first comment on Trump’s victory.

"We hope that the extradition [of Gulen] will happen soon and pave the way for a fresh start in US-Turkish ties," Yildirim said.

Ankara was also encouraged by an article in The Hill penned by retired Lt. Gen. Michael Flynn, one of Trump’s top advisers. Flynn said Washington had to understand that Turkey is “a source of stability in the region” and “vital to US interests.” He also compared Gulen to Ayatollah Ruhollah Khomeini.

“The forces of radical Islam derive their ideology from radical clerics like Gulen, who is running a scam. We should not provide him safe haven. In this crisis, it is imperative that we remember who our real friends are,” Flynn said

Vice President-elect Mike Pence also uttered remarks that were welcomed in Ankara. “Turkey is the US’ most important ally in the region. We will bring our relations with Turkey to a better stance, just like in the old days,” Pence told the daily Hurriyet on Nov 9.

The question remains, however, whether Trump can deliver what Ankara wants, especially with regard to Gulen. Steptoe & Johnson LLP, the US law firm representing Gulen, responded to Flynn by pointing out that extradition was a legal matter, not a political one.

"The US has strong democratic institutions, including its judiciary system, where these high-level issues are handled. We expect and are confident that will be the case in the next administration," the firm said in a statement.

Initial signals from Washington nevertheless suggest that Ankara might be a little better positioned under the Trump administration to get some of what it wants with regard to Gulen. Murat Yetkin, the editor-in-chief of Hurriyet Daily News, argued that life for Gulen in the US might get more difficult under Trump.

“It is possible that Trump, who once questioned Clinton because of the donations she received from Gulen, could take legal action against the exiled preacher, if not extradite him (which is subject to complicated court procedures),” Yetkin wrote in his column.

Making life difficult for Gulen in the United States would appease Ankara to an extent, but the extradition issue will mostly likely linger for some time. Gulen has a strong legal team that is bound to use the American legal system to the maximum benefit on his behalf.

Erdogan’s supporters also believe that Turkey’s regional interests may be better served under Trump. Burhanettin Duran, the general coordinator of the Foundation for Political, Economic and Social Research, which is close to the AKP, is cautiously optimistic in this regard.

Duran sees a new opportunity for Turkish-US ties under Trump and considers Flynn’s article for The Hill a positive sign. He also argues that Erdogan might get Trump to sever Washington’s ties with the Democratic Union Party (PYD) and the People’s Protection Units (YPG) in Syria, which are allies of the US-led coalition against the Islamic State (IS).

Ankara says these are terrorist groups linked to the outlawed Kurdistan Workers Party (PKK) and has called on Washington not to support them. It remains a big question, however, whether Trump will move in that direction after he told The New York Times that he is “a fan of the Kurds.”

Other analysts say Trump is unlikely to dump the PYD and the YPG when operations against IS in Syria are gaining momentum. Soli Ozel, from Istanbul’s Kadir Has University, believes that Trump’s position on the Kurds will not be different than the Obama administration.

“I don’t think he will allow the Kurds to be left out of the picture the way Turkey wants. I think he will encourage Turkey to desist from equating the PYD with the PKK,” Ozel told daily Hurriyet in an interview.

Duran believes that a source of potential tension between Ankara and Washington could be the lack of a distinction for Trump between what are considered to be moderate Islamic groups, such as the Muslim Brotherhood, and radical ones. Turkey remains a strong supporter of the Muslim Brotherhood.

Trump’s promise to cut aid to the Turkish-supported Free Syrian Army, on the grounds that it is made up of unwelcome Islamic elements, could also compound tensions between Ankara and Washington.

Turkey’s problem is that Trump remains an unknown quantity on many issues. His strong support for Israel and negative approach to Muslims, however, are known and remain problematic for Ankara.

Trump’s policy on Turkey could turn out to be predicated on the expectation that Ankara will do Washington’s bidding in line with conservative America’s outlook on Islam.

Turkey under a staunch Islamist president and government is unlikely to do that. The Erdogan-Trump honeymoon could therefore turn out to be short-lived, because both leaders are set in diametrically opposed ways on key issues.