The careless slip of a Saudi tongue was enough to anger Egyptians and end the term of the Organization of Islamic Cooperation's secretary-general as Riyadh-Cairo relations deteriorate over regional alliances and halted oil shipments. 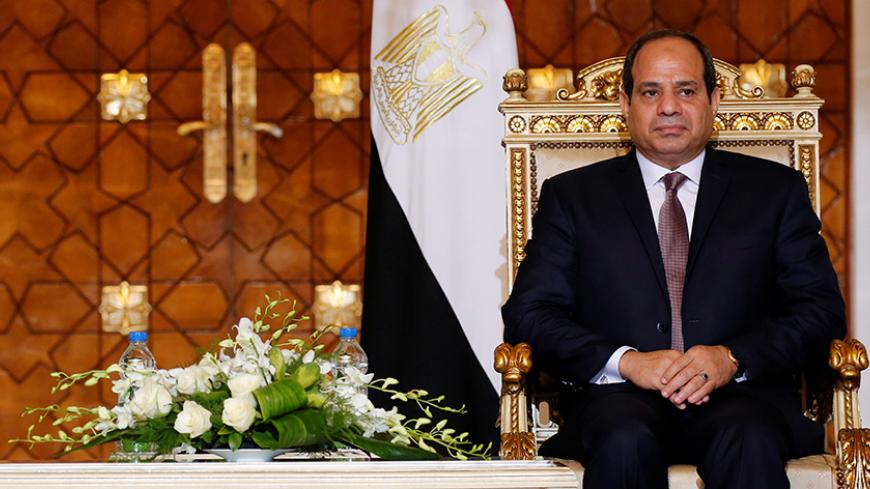 Saudi Shura Council head Abdullah Al-Sheikh’s unannounced visit to Cairo on Nov. 3 was apparently Riyadh’s positive response to Gulf mediation efforts to calm tensions between Egypt and Saudi Arabia and to keep their feud out of the media.

Al-Sheikh’s visit was less than a week after the Oct. 31 announcement that Iyad Madani, the Saudi secretary-general of the Organization of Islamic Cooperation (OIC), an international organization of 57 Islamic states, had submitted his resignation citing health reasons.

Madani resigned one day after Egyptian Foreign Minister Sameh Shoukry gave a speech to the Egyptian parliament in which he stated that Egypt, an OIC founding member, has submitted an official memorandum to the OIC condemning Madani's remarks about Egyptian President Abdel Fattah al-Sisi.

Shukri said, “Madani’s remarks confirm he is no longer qualified to perform his diplomatic and political duties as the organization’s secretary-general. The Egyptian government will follow up on the matter to meet the popular demands.”

Madani, a former Saudi information minister, had mixed up the name of Tunisian President Beji Caid Essebsi during his speech at the Oct. 27 inaugural session of the first Education Ministers Conference organized by the Islamic Educational, Scientific and Cultural Organization, in Tunisia.

Madani had called Essebsi “Mr. President Beji Caid al-Sisi” and immediately realized his mistake and chuckled before stating, “That was a horrible mistake. I am sure your fridge has more than water.”

This statement was a reference to an Oct. 25 comment by Sisi in a meeting with a group of young people at a seminar on the sidelines of Egypt’s first National Youth Conference in Sharm El-Sheikh. Sisi had said, “I am one of you. … I swear to God, I spent 10 years with nothing but water in my fridge, and no one heard my voice.”

Sisi’s words inspired a wave of sarcastic criticism on Twitter, as social media users in Egypt and abroad used an Arabic hashtag that translates to “Sisi’s fridge.”

Although Madani had not insulted Sisi and formally apologized the next day for this mistake, which he described as a joke and a pleasantry, pro-Sisi journalists continued to rail against Madani, describing the remarks about Sisi’s empty fridge as intentional mockery of the Egyptian presidency.

Egyptian journalist Youssef al-Hosiny tweeted Oct. 29, “When the desert rats think they are lions, we will send them Ibrahim Pasha.” Hosiny was reminding the Saudis that they were once ruled by Ibrahim Pasha, the Albanian ruler of Egypt who conquered Diriyah, the original home of the Saudi royal family and took down the first Saudi state in 1818.

Madani’s resignation seems to have somewhat eased the tensions, but this does not mean that the love-hate relations between Riyadh and Cairo will return to their previous status before King Salman bin Abdul-Aziz Al Saud’s ascension to the throne in 2015. Salman fiercely opposes Iran, and his positions toward Turkey and the Muslim Brotherhood is not harmonious with those of Cairo.

The Saudi leadership has long known Sisi’s opinion of the Saudi political system, which Sisi had described as “not necessarily well respected in the Middle East” in his graduation thesis for the US Army War College in Pennsylvania in 2006.

According to several media reports, Saudi leaders were also sure about the authenticity of leaked audio recordings of a conversation allegedly held a few days before Sisi’s announcement of his presidential bid on March 26, 2014, between him and his office manager Maj. Gen. Abbas Kamel. In the recordings, Sisi is heard describing the Gulf states as half-states that should be treated based on a "give-and-take" strategy.

Nevertheless, the Royal Diwan in Riyadh, the primary executive office of the Saudi king, continued to support the regime against the Brotherhood in Cairo through the media and diplomacy in addition to Saudi financial aid and investments of more than $20 billion, including $8 billion of financial grants and deposits.

Riyadh believed that the military regime in Egypt was best placed to cope with the Muslim Brotherhood and keep it out of the Gulf states.

Al-Monitor talked to a well-informed diplomatic source at the Saudi Embassy in Cairo, who spoke on the condition of anonymity, about the future of the relationship between Riyadh and Cairo.

When asked whether Riyadh intends to withdraw part or all of its deposits from the Central Bank of Egypt in the wake of Saudi Aramco’s announcement of its indefinite halt of oil shipments to Egypt, the source said, “Riyadh, as usual, will handle all disputes with a great deal of responsibility and professionalism. There is no decision yet on the Saudi deposits in Cairo. But the future relations with Cairo would be based on a reciprocal treatment in terms of policies and media support. We will not accept being seen as a cash machine.”

It should be recalled that Saudi Arabia has been providing financial aid to Egypt since the era of the founder of Saudi Arabia, King Abdul-Aziz Al Saud, who announced during his visit to Cairo in 1946 an annual grant that started at 1 million British pounds (at the time equivalent to $4 million). Saudi Arabia’s financial support to Egypt has been increasing ever since.

Concerning whether the halt of oil shipments is a reaction to the Oct. 8 vote by Egypt’s ambassador to the United Nations in favor of a Russian draft UN Security Council resolution for the cessation of all hostilities in Syria, excluding the Russian and Syrian air strikes, the source told Al-Monitor, “The dispute with Cairo is ramified and deep-rooted. Some sister states are trying to act as mediator with Cairo to resolve all points of contention, despite the Egyptian’s unfortunate position in support of Russia against Arab interests.”

Saudi Arabia, along with many Arab and Islamic countries, has been demanding the cessation of all hostilities in Syria.

After three years under Sisi's rule, it seems that Saudi Arabia’s investments in the Egyptian regime have failed and have become a heavy burden that it can no longer afford and is therefore slowly letting go.