Many Turks agree that reviled cleric Fethullah Gulen at least inspired the botched July coup, but as the net tightens on his followers, the authorities' focus on a little-known academic seems a bit of a reach. 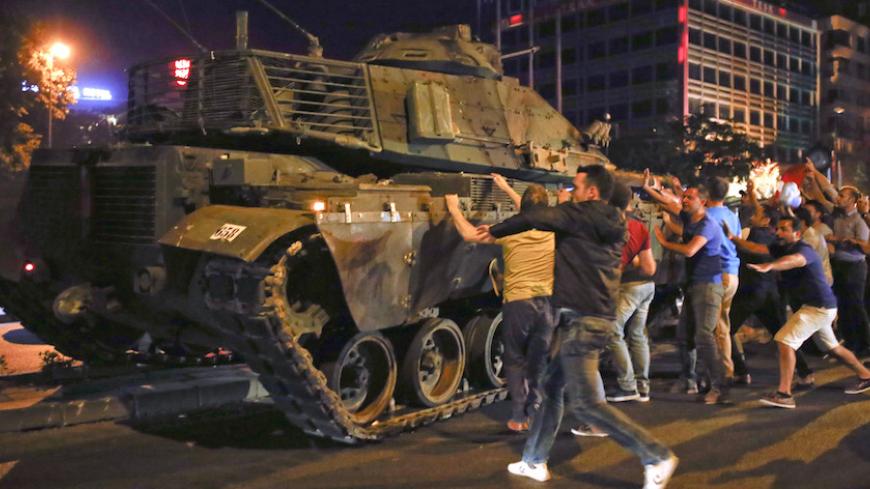 People react near a military vehicle during an attempted coup in Ankara, Turkey, July 16, 2016. - REUTERS/Tumay Berkin

As Turkey continues to reel in fugitive disciples of Fethullah Gulen, the Pennsylvania-based Sunni cleric accused of masterminding the July 15 coup attempt, a key suspect remains on the run: Adil Oksuz, an obscure theology professor who is now being touted by the ruling pro-Justice and Development Party (AKP) media as the top civilian organizer of the putsch inside Turkey.

Like much else about the attempted takeover, Oksuz’ case remains shrouded in mystery. He was detained by gendarmerie forces on July 16 near the Akinci air base in Ankara on suspicions of participating in the coup. During his interrogation Oksuz denied any involvement, saying he had never set foot in Akinci, which served as the operational headquarters of the putschists. Oksuz was then released on strict condition that he not leave the country and has not been heard from since.

But a new warrant for Oksuz’ arrest was issued soon after a prominent defector from the Gulen network claimed that the academic had likely played a central role in the coup as Gulen’s “air force imam” — the person charged with recruiting for him within the air force.

A countrywide manhunt is now in full swing. Media reports suggest Oksuz may have fled Turkey.

Speculation about the man intensified when the leader of the opposition Republican People’s Party, Kemal Kilicdaroglu, claimed he had “information” about Oksuz. “Who is Adil Oksuz? Why isn’t he arrested? I have an answer, of course, but I cannot share it now. I need to have documents [proving it]. I have some information,” Kilicdaroglu told CNN Turk.

The “evidence” of his complicity thus far is a GPS tracking device that is said to have been among Oksuz’ personal effects when he was detained and a video showing Oksuz and his sons paying homage to Gulen at his Pennsylvania compound. There appears to be no prior connection between Oksuz and the Turkish air force.

The allegations swirling around Oksuz in the pro-government media may be something of a fig leaf. The real target may be a far bigger fish: former Prime Minister Ahmet Davutoglu, who was unceremoniously booted out last year. The former academic has become something of a rallying point for disgruntled AKP members upset with Erdogan’s ever tightening grip, and perhaps more importantly, over being excluded from patronage networks.

The opening shot came from Duvardibi, an online news portal that is run by a small group of Erdogan loyalists and continually attacks Davutoglu. In an Oct. 1 editorial, Duvardibi claimed that Davutoglu had been “discovered” as a doctoral candidate by a Gulenist professor who taught at the same university that Oksuz did, Sakarya.

And that's not all. This professor, who also has a warrant issued for his arrest and is on the run, is said to have “discovered” Oksuz as well. If anything, such commentary sheds more light on the divisions within the AKP than on the coup itself.