The brewing battle over coffee in Turkey

Amid an increase in coffee consumption in Turkey, leading international coffee chains have stormed into the local market, luring the young clientele. 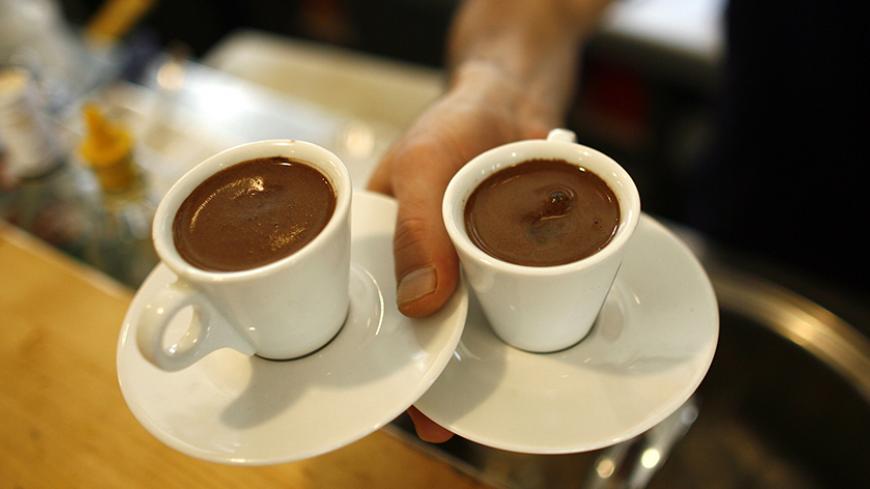 Turkish coffee is one of Turkey’s best-known hallmarks abroad. The coffee beans are not homegrown, but the slow brewing technique, taste, aroma and a history of about 500 years make Turkish coffee special on the world coffee scene. While it is served in small cups of only several sips, Turkish coffee opens the door to conversations stretching over hours. It is also a central element in a premarital ceremony, in which the family of the groom-to-be visits the family of the bride-to-be to ask for her hand. The bride-to-be makes Turkish coffee for the occasion as a first treat for her future in-laws. To pass the test with flying colors, the coffee has to be brewed on a low flame and have plenty of foam. Yet if the girl is reluctant to marry her suitor, her coffee may not taste that good, and even salt could replace sugar in the brew!

Turkish coffee is also the first thing served when neighbors visit each other. After drinking the coffee, they turn the cups upside down onto the saucers to read the residual coffee grounds. After a while, the cups are opened and imagination begins to speak — upcoming trips, lucky events, money, love or anything about life.

The casual coffee-reading sessions at home have now become a professional sector at coffee shops. There are even online coffee readers — all you need to do is send a photo of the shapes the coffee residue has formed inside the cup.

In Turkey, there are now plenty of other options for coffee. Leading international brands such as Starbucks, Gloria Jean’s, Illy, Robert’s, Caffe Nero, Barnie’s, John’s, Lavazza and Schiller’s have opened hundreds of shops across the country since 1999. A total of 31 local and foreign brands ran 1,178 shops in 2015, and the number is estimated to have exceeded 1,200 this year. Starbucks alone has more than 200 shops. A famous coffee brand can be found on almost every big avenue and in every shopping mall. The coffee shops offer internet connections and often have special tables suitable for studying, which has made them the new meeting place for the young.

Against the well-deserved fame of Turkish coffee, the foreign brands offer various types of filter coffee, often flavored with creams and syrups, such as macchiato, Frappuccino, latte, cappuccino, mocha and Americano, which the young Turks have readily embraced.

According to various sources, the coffee market in Turkey is worth 500 million Turkish lira ($162 million), with Turkish coffee accounting for 125 million Turkish lira ($40.5 million). Though the market is growing, coffee consumption remains low compared to Western markets. In the European Union, for instance, annual coffee consumption is 600 grams per capita, six times bigger than in Turkey. Yet consumption appears bound to increase, with the coffee market growing an impressive 15% per year.

Encouraged by this outlook, Semih Kurumlu has become one of the latest entrepreneurs to join the Gloria Jean’s chain, which has 60 shops across Turkey. Kurumlu, whose shop is located in Ankara, told Al-Monitor, “We bring the best-quality coffee from seven regions across the world, brew it and sell it for affordable prices. We don’t have waiters here. The clients take their coffee and sit down, and then no one comes to their tables to annoy, asking whether they would like something else.” Kurumlu said young people prefer the foreign coffee types, while their elders go for Turkish coffee, especially after lunch and dinner. In Kurumlu’s shop, foreign coffee types account for 80-90% of total sales. The figures are similar at Starbucks.

In both chains, the shops play only foreign music. Kurumlu is happy with that. “I wouldn’t have played local music, even if I was free to do so,” he said. “Polarization has reached such a level that local music would have been a problem. Some local musicians are seen as rightists, others as leftists and yet others as Gulenists. So the best is to play foreign music.”

At Kahve Dunyasi (Coffee World), the largest local chain that boasts more than 200 shops both at home and abroad, the breakdown of consumer preferences is different. Mehmet Uysal, the manager of a Kahve Dunyasi shop in central Ankara, told Al-Monitor, “In terms of packaged coffee, we sell about 10 kilograms [22 pounds] of filter and instant coffee per day and a similar amount of Turkish coffee.” He added that about one-third of sit-down clients ask for Turkish coffee. At Kahve Dunyasi, buyers of the traditional brew are treated with free chocolate and water, which is an important factor boosting the sales.

And what are the consumers saying? Fahrettin Asik, a sexagenarian, told Al-Monitor he turned to filter coffee upon advice that it reduces the risk of Alzheimer’s disease. Sahin Aldanmaz said he got accustomed to Colombian coffee because he liked its aroma and strength. Coffee is now an “indispensable” part of his daily life, he added.

The boom in the coffee sector has attracted local chains to the market, as well. Turkish brands such as Kahve Diyari, Cafe Crown and Coffeemania have followed in the steps of local leader Kahve Dunyasi, whose supply of coffee beans comes from a special Brazilian farm catering only to the Turkish company’s needs. Kahve Dunyasi founder Birol Altinkilic noted that consumption in the Turkish coffee market has grown from 6 tons to 38,000 tons per year in a matter of years.

Traveling in Europe about 15 years ago, I was surprised to discover that homeless people asked for money for “a cup of coffee” rather than for “a piece of bread,” as they would do in my country. Today, I can relate to them, having become a “coffee addict” who hardly goes a day without the drink. And given that 78% of Turks have become coffee drinkers, similar entreaties could be soon heard in the Turkish streets as well.