Why Egypt's 'revolution of the hungry' isn't coming soon

Despite rumors that protests have been planned for Nov. 11, it seems many Egyptians don't want — or can't afford — an uprising at this time. 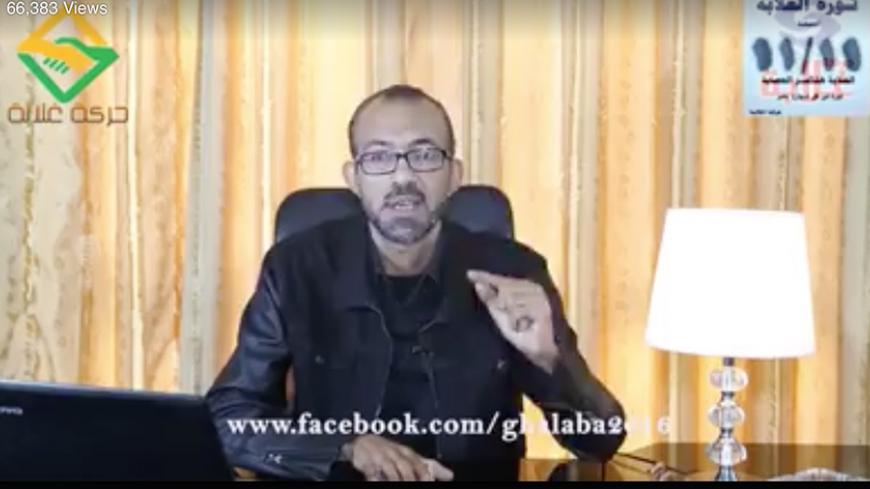 On Sept. 21, 2016, Yasser El Omda calls on Egyptians to take part in a mass protest against the government in November. - Facebook/@ghalabaa2016

“The Egyptian Revolution continues. Our aim is to reverse the coup. We are seeking retribution for the martyrs killed since January 2011, and we shall hold the coup leaders accountable for their crimes.”

This video message delivered by Yasser El Omda, a Turkey-based outspoken critic of Egypt’s military-backed regime, was uploaded Sept. 21 on a Facebook page called Thawret El Ghalaba (Revolution of the Poor). It is one of several videos posted on the page urging Egyptians to participate in mass protests allegedly planned for Nov. 11 “to overthrow the corrupt regime and liberate the country from those who have betrayed and humiliated the Egyptian people."

The ominous message, part of the so-called “Ghalaba” online campaign inciting protests, has fueled fears of a new wave of uprising in the country that some disgruntled Egyptians warn is imminent. Analysts, however, have downplayed the video, dismissing it as “empty talk” and "Muslim Brotherhood propaganda.”

Security sources told the Egyptian privately owned news site ElBawabh News that the Ghalaba Movement is funded by foreign powers seeking to destabilize Egypt and spread chaos in the country. The Interior Ministry has repeatedly warned that it would deal firmly with those who instigate violence or attempt to spread chaos and disturb public order.

El Omda, who works for the Muslim Brotherhood-affiliated satellite TV channel El Sharq, is the creator of the hashtag #Ghalaba (Arabic for poor), which in recent weeks has been used by regime opponents on social media to condemn the actions and policies of the Egyptian government. In the video, also broadcast on Mekameleen (a satellite TV channel known for its scathing criticism of the Egyptian government), El Omda rebuts claims by some Egyptian media outlets that the movement he founded has links with the Muslim Brotherhood, which is designated a terrorist organization by Egyptian authorities. He also denies that the movement has ties with the April 6 Youth Movement (credited with organizing the January 25 protests that forced authoritarian President Hosni Mubarak to step down).

“Ghalaba was founded by Egyptians of different ideologies who are united only by their common goal of overthrowing the military-backed regime,” he says.

The video is reminiscent of an earlier video posted on Facebook on Jan. 18, 2011, by Asmaa Mahfouz, a pro-democracy activist and one of the founders of the April 6 Youth Movement. She, too, had mobilized Egyptians to participate in demonstrations to bring down the regime. Mahfouz’s video had quickly gone viral, helping spark the 18-day uprising that forced Mubarak to step down. In stark contrast, the new video has drawn a subdued reaction from Egyptians (getting only 1,800 likes since it was uploaded on the Facebook page more than two weeks ago), signaling what appears to be a lack of interest on the part of Egyptians to participate in another uprising.

“I doubt anything major will happen on Nov. 11,” H.A. Hellyer, a nonresident fellow at the Rafik Hariri Center for the Middle East at the Atlantic Council, told Al-Monitor. “While Egyptians still face the same structural problems that prompted the uprising against Mubarak — judicial failings, police excesses, a disenfranchised opposition and a harsh government crackdown on protests — there doesn’t appear to be an appetite for wide-scale political mobilization right now … unless something major happens to change this.”

“The opposition Muslim Brotherhood has been weakened significantly as a result of the mass arrests and the security crackdown on dissent. The group is incapable of mobilizing the public for protests," he told Al-Monitor.

“Besides, there is no alternative to the current regime,” he added.

The Islamist group, which rose to power after the 2011 Revolution in Egypt, is highly unpopular with Egypt’s Christians after a spate of church attacks in Egypt, blamed on Islamists, during and after President Mohammed Morsi’s rule. The group has also fallen out of favor with the country’s liberals and young revolutionaries, the majority of whom had initially — albeit grudgingly — given their backing to the Muslim Brotherhood president. Morsi’s incompetency and a persistent vilification campaign targeting the Muslim Brotherhood by Mubarak loyalists in the media both during and after Morsi’s rule has made an alliance between the Muslim Brotherhood and other political factions highly unlikely. In the prevalent atmosphere of polarization and mistrust, the government has capitalized on people’s fears to entrench its powers and exercise greater control of citizens.

With thousands of the group’s members and supporters in jail for participating in protests calling for “a return to legitimacy” after Morsi’s ouster or for simply belonging to the outlawed group, and hundreds more killed by security forces since 2013, it is not surprising that the Muslim Brotherhood fears a backlash from the regime that has cracked down ruthlessly on political opponents.

While a statement published by Ikhwanweb, the Muslim Brotherhood's official English website, warns that "a just retribution is coming soon, where the unjust, the oppressors and criminals will regret their wrongdoing,” the group has been quick to distance itself from Ghalaba’s anti-regime campaign. Mohamed Al-Sharqawi, head of the Muslim Brotherhood’s US bureau, has reportedly described the calls for protests as “political madness,” advising the Islamist group’s members not to participate in “demonstrations that are destined to fail.”

The April 6 movement, which has also been targeted in the security crackdown, with several of its members killed or imprisoned, has also decided not to heed the call for protests. Sherif El Roubi, the spokesman for the group, told Al-Monitor in a telephone interview, “While there is no denying that the current regime is oppressive and has outlawed protests and stifled civil society and free expression, the Ghalaba campaign was instigated by regime opponents who reside in Turkey and Qatar. They lack a real understanding of the political landscape in Egypt and of the challenges that we face.” Roubi added, “Change has to come from within and must start with political factions sitting together to draw a road map for the way forward including free and fair elections.” However, he ruled out any rapprochement with the Muslim Brotherhood because “we simply do not trust them.”

Roubi believes the time is not right for protests as “it will be difficult to mobilize the public at this stage.”

“No matter how frustrated Egyptians are with the current conditions and in particular, the high prices of basic commodities, they are too divided and too tired to revolt,” he said.

Indeed, five years of political turmoil have left their mark on the weary population and the soaring food prices have put an added strain on low-income households. A much-expected further devaluation of the Egyptian pound and a dollar crisis would make life even harder for Egypt’s poor. Yet, there are no signs that a new eruption is coming — just yet.

“While there’s a lot of talk about a revolution of the hungry, these are just words we use to vent our anger, to pacify ourselves, really, and to keep the government in check. In reality, we know that we cannot afford a new uprising," Ali Shehata, a father of four who works at a gas station, said. “We need to get back to work or our children will die of hunger.”