How a kick rattled Turkey

Turkish women take to the streets to denounce conservative pressures after a young nurse is assaulted on a public bus for wearing shorts. 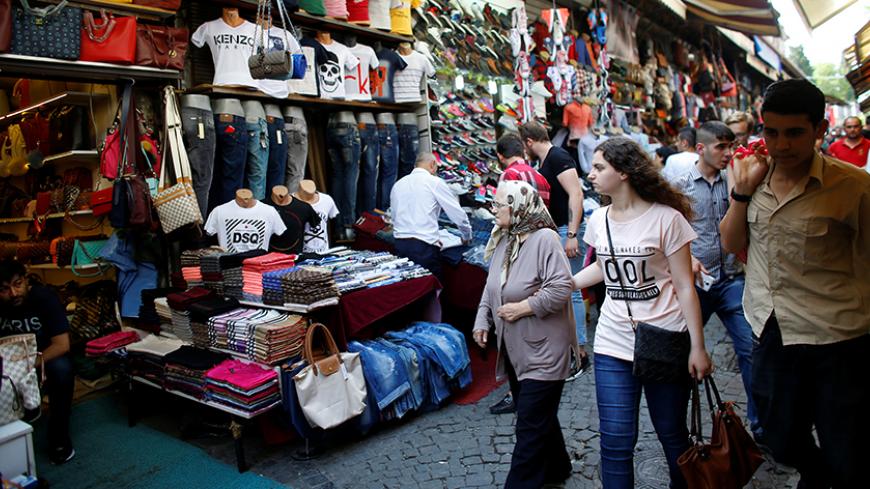 Women walk past by shops at an open air bazaar near the Grand Bazaar, known as the Covered Bazaar, in Istanbul, Turkey, June 14, 2016. - REUTERS/Murad Sezer

A young Turkish woman, Aysegul Terzi, was attacked by a man on an Istanbul public bus earlier this month for wearing shorts. According to security camera footage and witness accounts, the man, identified as Abdullah Cakiroglu, shouted, “Why are you going about in shorts!” He then told the 23-year-old nurse, “You are the Satan,” and kicked her violently in the face. Terzi says the other passengers remained silent and the driver dumped her at the first stop. She went first to the hospital, and then filed a complaint with the prosecutor’s office. The alleged assailant was caught and booked for “actual bodily harm” before walking free. He was soon re-arrested, but only after widespread outcry over his release.

Thus far, the story is almost ordinary for Turkey, where Terzi is neither the first nor the last woman to be attacked for what she wears or says, or simply for being present at a particular place. Scores of women before her have faced similar treatment, and only a few days later a woman was punched in the face by two men in Izmir after rejecting their advances, which, according to reports, were “emboldened” by her low-cut dress.

The assault on Terzi, however, sparked vocal indignation and protests. Since the Sept. 12 incident, women in various cities have taken to the streets, wearing shorts to assert their freedoms. Some have hung shorts and miniskirts on campus walls, others have shared pictures of themselves wearing shorts on social media. Though temperatures fell notably last week, the protests continued, with one bringing both women and men together in downtown Istanbul over the weekend. All were meant to give one message: Don’t meddle in my lifestyle!

Senal Sarihan, a deputy for the main opposition Republican People’s Party (CHP) and a supporter of the protests, believes the outcry is only the beginning of a backlash against what she sees as a long-standing drive to impose conservative values on society. “A certain mentality has become prevalent in Turkey, trying to darken all realms of life. An attempt is underway to impose a single lifestyle in accordance with the religious beliefs of one segment of society, to create a single type of people,” she told Al-Monitor. “And the recent incidents have now sent women up in arms. This in fact is only the beginning of the backlash.”

Sarihan sees the protests not only as a response to the attack on Terzi, but as a wholesale rejection of discriminatory policies imposed on women. And she has good reasons to believe so. The ruling Justice and Development Party’s (AKP) political rhetoric about women has become increasingly perturbing over the years. The tone was set by President Recep Tayyip Erdogan, who argues that women and men cannot be equal and that women who reject motherhood are "deficient” and “incomplete." In other memorable statements, former Deputy Prime Minister Bulent Arinc admonished women against laughing in public, while Health Minister Mehmet Muezzinoglu said motherhood is the only career for women.

In sum, the government has adopted a political rhetoric that ostracizes women who reject the social roles imposed on them and even questions their womanhood. And the women who have taken to the streets today believe that this rhetoric translates into physical attacks and a growing danger to their safety in the streets.

Feeling the heat, the AKP took two important steps in a bid to dispel the apprehension. First, Terzi’s alleged assailant was put in prison pending trial, and then the government announced a plan for legal amendments to toughen sanctions for such attacks. According to media reports, the Justice Ministry’s draft bill puts “actual bodily harm” into the scope of offenses for which the offender can be kept in pretrial detention. If this is really all the ministry plans to do, the government seems to be struggling to grasp the core of the matter.

During his interrogation, Terzi’s alleged assailant said he was “provoked” by the sight of a woman clad in shorts, adding he would have been “provoked less” if she had worn pants. So he basically says he would not have attacked if the woman had kept her legs covered, or alternatively if the person in shorts was a man, which means the offense here is not a simple case of bodily harm.

Kerem Altiparmak, a scholar of law at Ankara University, says the attack was no less than a hate crime, stressing that a kick motivated by an intent to forcefully change the way others dress cannot be equated to a simple kick employed during a brawl. If the law makes no distinction between the two, “It means it is not interested in preventing attacks over clothing styles,” Altiparmak said in an online article. Citing the example of racist crimes, he wrote, “Injuring someone with racist motives is different from [just] injuring someone. Hate crime penalties are meant to punish not only the physical harm but also the racism behind it. … Is Turkey’s legal system truly interested in protecting the minority’s lifestyle against the pressures of the majority today? If it is, offenses committed over lifestyles should be considered hate crimes and subjected to tougher sanctions.”

Sarihan, a lawyer by profession, agrees. “This incident cannot be seen in the category of personal attacks, battery or ordinary brawls. It’s in the scope of hate crimes,” she said. The CHP lawmaker cast doubt on the AKP’s amendment plan, playing it down as a move to assuage the public outcry and get the female demonstrators off the streets. “Before the law, there is the issue of mentality that needs to undergo change,” she added.

Hidayet Sefkatli Tuksal — a prominent theologian often referred to as an “Islamic feminist” — was herself the victim of Turkey’s dress wars in the pre-AKP years when hijabi women were shut off from a number of public realms. She, too, backs the call for hate crime sanctions but, unlike the CHP deputy, believes the government’s moves are important. “The government is trying to prevent the spread of such incidents and make sure that others are not emboldened to follow suit,” Tuksal told Al-Monitor, stressing that the planned amendment should be seen as a “deterrent” measure.

“Women wearing shorts may be commonplace in coastal areas, but [elsewhere] this type of dress has been coded as improper in the conservative mind. The attitude of the Ministry of Family [and Social Policies] is very important,” she said. “The feminist demonstrations, I think, are also important. No one should have the audacity to pressure and punish women.”

Prime Minister Binali Yildirim, meanwhile, argued that Terzi’s assailant was mentally unstable because, according to him, a normal person irked by a woman in shorts would have only “murmured” to himself and moved on. In this climate, the women who demonstrate in the streets and the politicians and columnists who back them have one question in common: Would the government have reacted in the same way if the kick had landed on the face of a woman who wore a headscarf rather than shorts?