Palestinians and Peres: A love-hate relationship

Palestinians insist that while the late Israeli leader Shimon Peres was an Israeli patriot, he bears major responsibility for the plight that Palestinians find themselves in today. 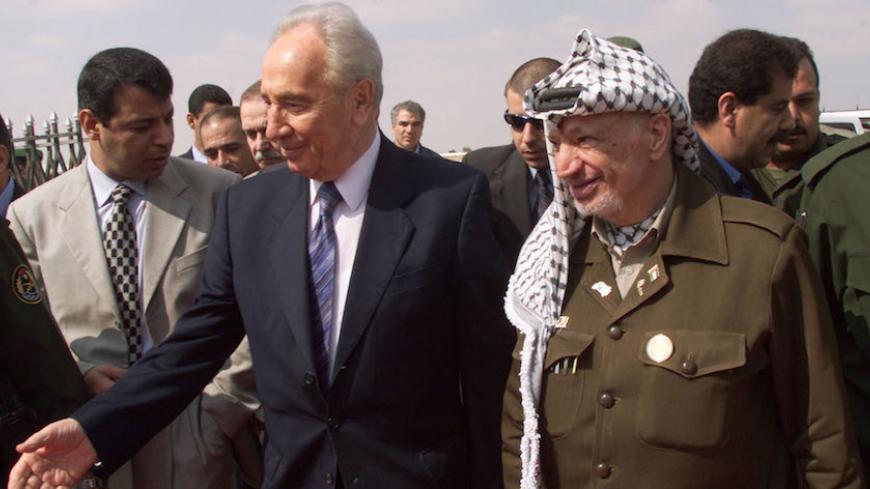 The atmosphere at the Palestinian ministry was as cold as ice. News had come of the condolence statement issued by Palestinian President Mahmoud Abbas on the death of former Israeli President and Prime Minister Shimon Peres.

The press was asking for comments, but no one at the ministry wanted to talk to the press. A senior Palestinian official who spoke to Al-Monitor on condition of anonymity, said, “If we say what we want, we will be going against what the president said. At the same time, no one wants his or her name associated with a whitewashing of Peres’ bloody history.”

Most of the staff working for the Palestinian government today entered political life around the time Peres and Abbas sat at a table on the White House lawn, on Sept. 13, 1993, to sign the Declaration of Principles on Interim Self-Government Arrangements between Israel and the Palestine Liberation Organization (PLO). That declaration, since called the Oslo Accord, established the very offices in Ramallah and elsewhere in which some of these longtime staffers work today. Oslo — which was preceded on Sept. 9 by an exchange of letters in which Israel and the PLO recognized each other — ushered in the Palestinian Authority as well as controversial Israeli-Palestinian security cooperation.

Suheir Ismail, who trains Palestinian women to be filmmakers, began her work as a camerawoman during the first intifada (1987-1990). In an interview with Al-Monitor, Ismail argued that Peres shrewdly divided the Palestinian national movement while normalizing Israeli relations with the Palestinians and Arabs. “The person claiming to be a peacemaker acted to defend the Zionist plan to establish a Jewish state and turned the effort to resolve the Palestinian cause into an endeavor to manage the conflict,” she said.

Anees Sweidan, a Fatah activist from Nablus, told Al-Monitor that what has angered many Palestinians in the occupied territories is how Peres succeeded in diverting attention from the core issue of the land and settlements to one of protecting Israel and Israelis. “As the godfather of the Oslo process, he knew exactly what he was doing when he created a plan that he knew full well would not work, as it lacked the guarantees that would lead to an independent and sovereign Palestinian state,” Sweidan said. Sweidan posted on Facebook on Sept. 29 that Abbas should not have attended the funeral, calling Peres “a criminal.”

The most repeated criticism of Peres, and also often made against PLO officials, which includes Abbas, is that Oslo did not deal with settlements and did not even include a halt to settlement construction. Local leaders have often argued that the PLO, desperate for recognition by Israel, accepted the Israelis’ demand to postpone dealing with the issue of settlements.

According to a senior official in the prime minister’s office, who spoke to Al-Monitor on condition of anonymity, the number of settlements and settlers has tripled since 1993, making the possibility of the creation of an independent Palestinian state that much more difficult.

While Palestinians were generally unhappy with Abbas’ condolence message, which alluded to Peres’ lifetime commitment to peace, a number of activists and Palestinian officials contacted by Al-Monitor expressed respect for their old adversary.

Ismail, one of the three co-directors of “Palestinian Diaries,” a documentary chronicling the first intifada, expressed a quiet admiration for Peres’ patriotism. “He has been sincere to his ideology and his people, and if our leaders who met him from the Palestinian side worked the same way as Peres, we wouldn’t be in the situation we are in now,” Ismail asserted.

Mohammad Daraghmeh, a veteran Palestinian reporter and analyst, told Al-Monitor that the most important lesson we can learn from Peres is that he dedicated his life to the interest of his people and state. “He moved in different directions, creating one initiative after the other from different angles, whether from an economic, military or political direction,” he said. “[Palestinians] need a leader like Peres, who would work on building up state institutions and not his person.”

Daraghmeh, who met Peres a number of times, further said, “[He] always sought ways to help his country and had a strategic vision as to the place of his country in the region and the world.” The analyst admits that Peres’ vision of a “new Middle East,” reflected in his speeches and a book by that title, showed — despite this vision not being accomplished during his lifetime — the character of a leader who is thinking and initiating new projects and ideas.

This hate-love relationship between Palestinians and the late Israeli leader reflects the complexity of a man whom the world considers a peacemaker, while Palestinians insist that while he is an Israeli patriot, he bears major responsibility for the plight that Palestinians find themselves in today.