Slowly and gradually, ultra-Orthodox are changing Israel’s character, turning it into a religious state. 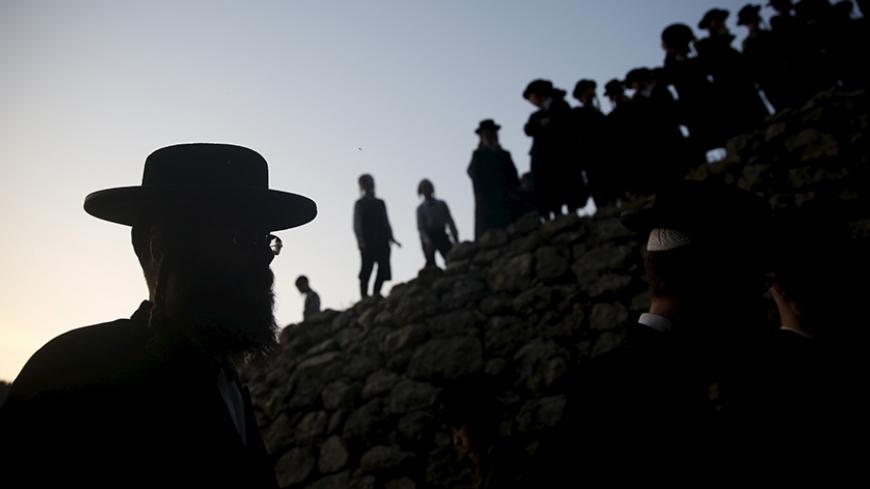 The mini-crisis over rail maintenance work on the Sabbath has come and gone, and tens of thousands of public transport passengers are probably busy with new concerns. The economic loss of millions of shekels on the day the trains were stopped, Sept. 4, a weekday, have been absorbed in the rubbish bin of taxpayer money. Self-appointed transportation officer Yair Lapid, the eader of the centrist, secular Yesh Atid and who volunteered to drive stranded soldiers to their duty stations on Saturday evening, picked up a few more votes.

The ultra-Orthodox parties were quick to cease fire. With the courts ultimately ruling that the government couldn't revoke past authorizations for conducting maintenance work on Saturdays, they indeed lost the minor battle over the railway. On the other hand, they are scoring point after point in the truly important struggle — between religion and state. They don’t have to make much of an effort. Others are doing the work for them: the government, the Knesset, secular Israelis and religious nationalists. A political leader, Lapid, who rose to prominence by demanding that the ultra-Orthodox be required to perform military service like other Jewish Israelis is photographed at the Western Wall, his shoulders covered in a prayer shawl, in a picture worth far more than a thousand words.

Public transportation comes to a standstill on the Sabbath in most parts of the country. Secular Knesset members recently supported a bill canceling the requirement to study core issues — math, English and other nonreligious subjects — in ultra-Orthodox schools, a move that ensures the ultra-Orthodox a never-ending stream of unemployable but disciplined voters. Most young ultra-Orthodox men and women continue to enjoy exemption from military and national service. The Orthodox stream of Judaism has a monopoly on the kosher food certificate industry, which hands out jobs for thousands of inspectors at food factories and in restaurants at taxpayers' expense. The State of Israel only recognizes conversions signed and sealed by Orthodox rabbis.

In “The Sabbath and Zionism,” the Hebrew essayist known as Ahad Ha’am, who passed away 90 years ago, wrote, “One can say, without exaggeration, that more than the people of Israel kept the Sabbath, the Sabbath kept them.” Indeed, the Sabbath, much like other religious traditions, Jewish holidays and Jewish culture, has served as the glue that binds Jewish communities in Israel and the Diaspora, although many assimilate or engage in fights with different streams of Judaism and rabbinical courts. Since the establishment of Israel in 1948, however, the Sabbath and other religious matters have become kegs of dynamite. These matters divide the Jewish communities in Israel from the Diaspora, split secular and religious Jews, religious and ultra-Orthodox, ultra-Orthodox of European (Ashkenazi) origin and those from Arab states (Sephardic Jews), the Orthodox, the conservatives and the Reform streams of Judaism.

Even the hands of the Supreme Court are tied. On Sept. 12, Chief Justice Miriam Naor mustered her harshest vocabulary to express the helplessness of the state’s top court in the face of the ultra-Orthodox minority. At a hearing on a petition submitted three years ago demanding that the Western Wall be managed by a multi-denominational Jewish entity, Naor said, “Things are being dragged out endlessly, without limits. … A plan was drawn up, regulations were written. … Why isn’t this thing coming to an end?”

Justice Elyakim Rubinstein, the vice president of the Supreme Court, himself an observant Jew, directed a half-question, half-rebuke at the rabbi in charge of the Western Wall area, Shmuel Rabinovitch, stating, “The rabbi has a point of view, but with all due respect, what’s to be done with the rest of the public that does not share this view?”

The questions presented by the chief justice and the justice, actually directed at the government, were left unanswered, while the ultra-Orthodox continue to dictate rules of conduct by the Western Wall. The disagreement over the right of women to pray as they wish and for non-Orthodox communities to pray at the wall plaza threatens to provoke a crisis in relations between Israel and the strong conservative and Reform Jewish American communities.

The religious wheeler-dealers are patient people. They are careful not to overexploit their good fortune or provoke the secular sector over the edge. On Sept. 7, Aryeh Deri, the interior minister and chairman of the ultra-Orthodox Shas, said, “We have to remember the limits and set priorities.” In an interview with an ultra-Orthodox radio station, Deri “dared” to say, “We live in a secular state — indeed, Jewish, but secular. We are not in a Jewish law state. The Messiah has yet to come, and we have not reached the ideal situation in which the entire people of Israel understand the essence of the Sabbath. … Secular Israelis will decide what kind of Sabbath they want. … We will not tell anyone what to do.” The ultra-Orthodox leader drew a distinction between Tel Aviv and the ultra-Orthodox town of Bnei Brak and his own Jerusalem neighborhood of Har Nof. Unlike in Tel Aviv, he said, no one violates the Sabbath.

The ultra-Orthodox parties chose not to react, instead keeping mum. They don’t need to talk, as others are waging the battle in their stead for religion in the state. Those doing so are not just average any others, but the country's top court. In a June 2013 ruling ordering the Tel Aviv municipality to enforce no-business on the Sabbath regulations, Justice Rubinstein wrote, “Tel Aviv is not another country, and it, too, has residents who want to adhere to the significance of the Sabbath, and it is bound by the laws of the state [establishing it] as Jewish and democratic.” In short, a city that does not uphold Sabbath regulations is not Jewish enough.

This decision unanimously overturned a ruling by the Tel Aviv District Court from February 2012 ordering the municipality to balance contradicting interests — on the one hand, freedom from religion, freedom of conscience, freedom of occupation and public needs, and on the other, the desire to adhere to traditional values and avoid hurting religious sentiment.

“We will not give the upper hand to the theocratic drive of our clerics. We will know how to keep them in their synagogues,” Theodor Herzl wrote in his seminal work, “The Jewish State.” The Zionist visionary warned, “In the affairs of state, with all our respect for them, the clerics must not interfere, lest they bring about difficulties at home and abroad.” He had no idea how right his prophecy would turn out to be.