How Indiegogo is connecting Israelis, Gazans

Many Israelis have responded to requests on the crowdfunding Indiegogo site to help desperate Gazans struggling to survive. 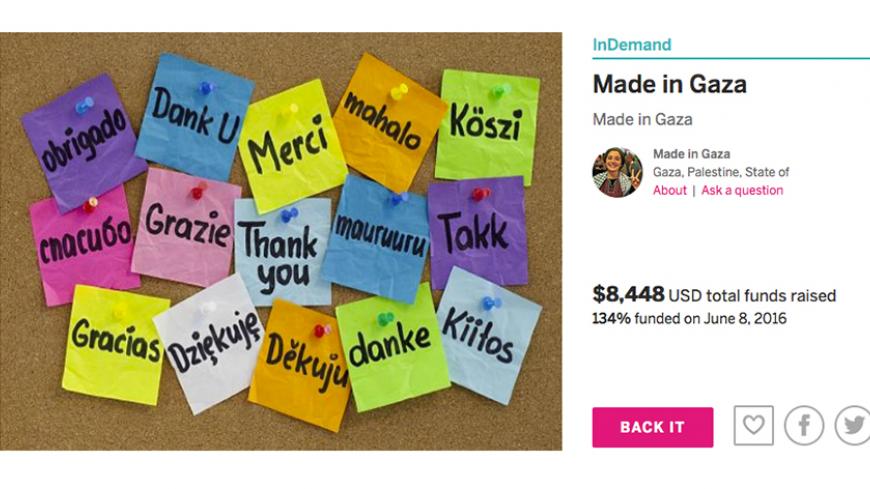 The Made in Gaza crowdfunding campaign on Indiegogo successfully raised $8,448 for female students of the Islamic University in Gaza, who sell handmade bags, tops and embroidery to campaign backers, June 8, 2016. - Indiegogo.com

“When people face distress and have to wage desperate daily battles for survival that no one in the world can understand, they look for creative ways to raise their heads above the ground and breathe.” These words were uttered quietly and with great pain by M., a young Palestinian in the Gaza Strip who requested anonymity for fear of reprisal by Hamas. I found him after receiving, like many Israelis, a personal Facebook appeal to help him raise money for a project he had launched on Indiegogo, a crowdfunding website.

M. had been unemployed for six years and therefore decided to study electrical engineering at the Islamic University of Gaza, hoping that as an engineer he would be able to find work. He completed his studies and got his degree, but after three years he hasn’t found a job. Meanwhile, his debts have ballooned and he has no way of paying them. So far, he has raised only a quarter of his target amount. Almost half of his donors are Israelis.

M. is not alone. The idea of appealing personally to Israelis identified as peace lovers came from friends at the Islamic University who had made such appeals in the past. The desperate young people, most of them university graduates, realized that their best chance for easing, albeit marginally, the distress of their daily lives in the besieged Gaza Strip was internet crowdfunding. To their surprise, they found that the most eager donors are the very people considered the enemy and those responsible for their plight — Israelis.

“There are two groups of fundraisers on the site,” M. told me. “One group tries to sell unique products and handicrafts made in Gaza, and the other group includes people who reach out for help and hope they will touch the compassionate hearts of people in the world, especially Israelis. I, too, sought help from people to extricate myself from the dire economic straits in which I found myself. Each one in his own way.”

Hand Made, one of the many fundraising projects, is the brainchild of a group of female students at the Islamic University. They sell unique, spectacular handmade bags, tops and embroidered artifacts that they make themselves. Like other young Gazans who have discovered the crowdfunding website, they searched Facebook for Israelis who appeared to be peace supporters, according to their postings on the social network. People whose names came up received the following message: “We send to you because we see that you support peace. Because of the hard economic situation in Gaza and the high percentage of unemployment we decide to start our own project in order to put our first steps to success.”

The response to the Hand Made appeal, so it seems, has often been positive. The project managed to raise $8,400, 34% more than the target amount. Among the 132 donors, 90 are Israelis unconcerned about their names appearing on the Indiegogo project’s list of donors.

The students send their products from Gaza by mail through the Israeli Erez checkpoint, after which it goes via the postal service for delivery. Nabil Faraj, the Palestinian in charge of mail from Gaza, coordinates the package shipments with the Coordinator of Government Activities in the Territories, a branch of the Israel Defense Forces.

“This is not a political contribution, but first and foremost a humanitarian contribution,” said D.K., an Israeli who has funded the project and requested anonymity. “It’s the least I can do for people suffering behind the fence. Other than that, I get a package with a masterpiece that I show with great excitement to all my friends.”

Not all the young Gazans who turn to the crowdfunding network have handicrafts or artworks to offer. Many simply ask for financial assistance to cover debts, buy medications, complete studies and support children. Help Amani’s Family is a project launched by Amani Ahmed. It is hard not to be touched by the painful words of a young woman trying to save her disintegrating family: “I am Amani Ahmed from the besieged Gaza Strip. I got my degree in business administration three years ago. In the suffocating siege. Life here in the Gaza Strip is very hard.”

Ahmed is trying to raise $5,700, for the following: “Help my children. Help us meet their needs. I am looking for your generous contributions to help me and my family [to] live as others: $3,500 to pay for debts; $700 for clothes for me and my children and school requirements; $1,500 to build a small project for my family.” She has so far managed to raise only $918. Her list of donors also includes the names of many Israelis.

Help Me to a Achieve Dreams Are Stopped by Siege is another funding project. Nabil Abed, 30, wrote that he earned a management engineering degree in 2009, is married and a father of three, but barely makes enough to survive. He promises donors of any amount a message of gratitude, a drawing from his own hand or an imprint of the donor’s photo on a T-shirt.

“I discovered the other side of the Israelis, the good side,” S. told Al-Monitor, having raised money the same way. “Some of them understand the impossible situation in which we live. I am a young man from Gaza who never did anything bad, I always supported coexistence, but my life and those of my children are drawing to an end. I have a family and children and endless debts. I simply want to live. Is that so hard to understand?”

S. said he cannot allow Hamas to discover that he has spoken to Israelis. I promised him I would not name him or his online project, which were his conditions for agreeing to be interviewed.

“God bless you,” he said at the end of our conversation, “and all the Israelis who have a compassionate heart and gave me money.” I heard him choking back tears. There are tens of thousands of young people like him in Gaza who have been under lock and key for nine years now.