Although Donald Trump's stance on the Muslim Brotherhood is in line with that of Egyptian President Abdel Fattah al-Sisi, the presumptive Republican nominee's statements on Muslims in general have decreased his popularity in Egypt. 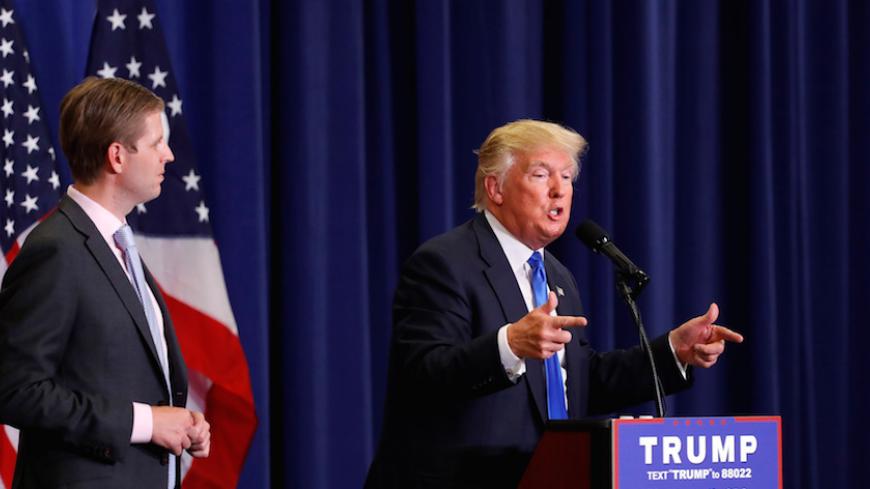 Opinions vary among Egyptian analysts as to which US presidential candidate would be better for the ruling regime. While some argue that Donald Trump’s statements against the Muslim Brotherhood show there is some common ground between him and President Abdel Fattah al-Sisi, the presumptive GOP nominee’s rhetoric on Muslims has worried government figures and politicians in Cairo.

Sisi will likely not endorse a candidate in the upcoming US elections in order to maintain good relations with the next president, yet many of the positions and viewpoints voiced by Trump show that there are common ideas shared between him and the Egyptian president. In a foreign policy speech delivered in New York in late June, Trump described the Brotherhood as “radical” and accused presumptive Democratic nominee Hillary Clinton of supporting the Islamist group’s ascent to power at the expense of former President Hosni Mubarak.

“[Clinton] helped force out a friendly regime in Egypt and replace it with the radical Muslim Brotherhood. The Egyptian military has retaken control, but Clinton has opened the Pandora’s box of radical Islam,” he said.

This is a position that aligns with Sisi’s own convictions concerning the group.

Clinton and Trump’s statements on the ruling regime in Egypt have helped to elucidate Sisi’s likely preferred candidate. During a debate with her Democratic rival Bernie Sanders in December 2015, Clinton said, “We saw what happened in Egypt. I cautioned about a quick overthrow of Mubarak, and we now are back with basically an army dictatorship.”

Meanwhile, in mid-June, Trump adviser Walid Phares called in on air to an Egyptian TV channel and said that he had spoken with the candidate about Egypt, its armed forces and Sisi, and that Trump’s position on the current leadership in Cairo was “very positive.” Phares added that Trump believes the Brotherhood is a terrorist group and should be designated as such inside the United States.

Yet despite the commonalities in Trump's and Sisi’s positions on the Brotherhood, the former’s statements about Muslims have decreased his popularity among the Egyptian public. In December, following the attacks in San Bernardino that claimed 14 lives, Trump called for a “total and complete” ban of Muslims entering the United States. He had previously called for surveillance of mosques and expressed an openness to establish a database to track Muslims living in the United States. Trump's weak popularity was demonstrated in a June survey of Egyptians and Saudis conducted by the Institute for Policy and Strategy at IDC Herzliya that showed low approval for the Republican nominee in both countries. The institute’s director, Alex Mintz, said Trump’s poor rating likely resulted from his inflammatory comments about Muslims.

However, Phares responded to such criticism in an interview with Egyptian daily Shorouk in late June, saying that Trump had misspoken. “Trump’s problem is that he hasn’t been engaged in politics before, so he mixed his words. When he said ‘Muslims’ he meant ‘terrorists,’ but he misspoke and said Muslims without specifying [Muslim terrorists].”

Yet Trump’s position on the Brotherhood has led to some voicing their support for him in Egypt, most notably well-known billionaire businessman Naguib Sawiris. In June, Sawiris confirmed that he backs Trump because, in his view, Clinton supports the Brotherhood.

During an interview with Al-Monitor, former Egyptian Foreign Minister Nabil Fahmy responded to a question about which candidate would be better for achieving cooperation with Egypt by saying, “The rhetoric adopted by US presidential candidate Donald Trump vis-a-vis Islam and Muslims is unacceptable and greatly offensive. On the other hand, Hillary Clinton carefully chooses her words and is a 'veteran politician,' with all the positive and negative connotations associated with such a characterization. Unfortunately, most Arab countries, especially the Gulf states, view the Republican candidate as being better than the Democratic one due to the former’s close ties with the business and petroleum sectors. I do not share that opinion and prefer to base my choice on the candidates’ respective stances and on prevailing conditions.”

Former deputy Foreign Minister Gamal Bayoumi said, “In superpowers like the United States, the president operates according to general policies set by state institutions and forces that have influence in political life. While the president may play a role in changing the approach, the policies remain fixed.” He told Al-Monitor that the statements made by candidates during the campaign do not necessarily indicate what they will do after being elected. For example, he noted that former President George W. Bush, prior to being elected, had not indicated he would adopt policies that would negatively impact the Arab region.

“Clinton is well informed on issues in the Arab region and has wide-ranging experience in dealing with the Arab world, unlike ‘radical’ Trump. However, anyone who might deal with a potential president Trump — whether the ruling regime in Cairo or other states — might benefit from his ‘extremism.’ His positions are clear and his popularity derives from his extreme [statements],” Bayoumi added.

In statements to Egyptian daily El-Balad June 9, Cairo’s former Ambassador in Washington Abdel Raouf El Reedy said that, overall, Clinton would be the better president for Egypt, despite her having what he called some unfavorable positions on Egypt and the Arab world. He noted that Clinton’s policies on Egypt and the Arabs would be an extension of Obama’s current policies, while attempting to avoid a repeat of the current president’s mistakes.