The attack at Istanbul Ataturk Airport on June 28 has triggered debate over whether Ankara is having problems deciding the priorities in its struggle against the Kurdistan Workers Party and the Islamic State. 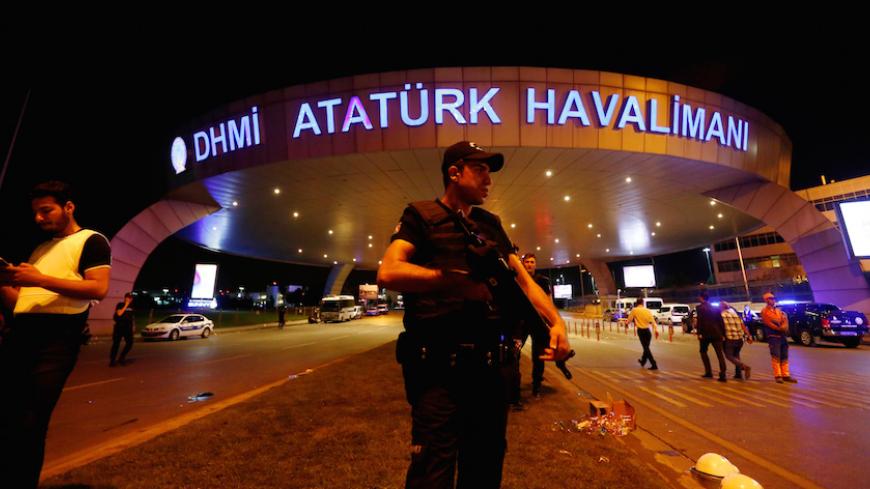 Over the past 12 months, 298 people have been killed and about 1,000 wounded in 17 terror attacks in Turkey. The attack at Istanbul's Ataturk Airport on the evening of June 28 was the sixth major terror attack in 2016.

What made this attack different from the others was its location. This is the third airport attack in Turkey’s long history of combating terror. In 1982, the Armenian Secret Army for the Liberation of Armenia attacked Ankara Esenboga Airport and killed nine people, and the Kurdistan Freedom Falcons, which is affiliated with the Kurdistan Workers Party (PKK), fired mortars at Sabiha Gokcen Airport in Istanbul in December 2015.

Last night's attack was the bloodiest and Turkey's first suicide attack at an airport.

In 2015, Ataturk Airport handled 62 million passengers. Its security measures make it one of the best-guarded airports in the world. However, the security perimeter, which had been recently expanded, created a severe breach in security, worsened by round-the-clock heavy traffic close to the arrival and departure terminals.

According to official reports, around 8:45 p.m. local time, three terrorists came to the airport in two taxis and easily reached the entrance of the international terminal. However, Al-Monitor spoke with security sources who claimed on condition of anonymity that seven people had been involved. Roughly 10 minutes after their arrival, they split into two groups and moved toward the security checkpoint at the terminal entrance. One of the attackers shouted in Turkish, “There is a bomb. It is going to explode," triggering panic among the large crowd waiting for the security checks. Then the attackers started firing randomly with their automatic rifles. The police responded. One of the attackers was wounded and blew himself up at the entrance of the terminal. Another did the same at the entrance to the parking lot across from the terminal. In the clashes and explosions that lasted about three minutes, 41 people were killed, 18 of them foreigners, most of them Saudis, Iranians and Ukranians. A total of 239 people were wounded.

Although investigations are ongoing, officials including Prime Minister Binali Yildirim have pointed to the Islamic State as the perpetrator.

A pattern is emerging in the terror attacks executed by the PKK and IS. The Jan. 12 attacks in the Sultanahmet district and in Taksim Square on March 19, both targeting popular tourist areas in Istanbul, suggest that IS prefers high-profile attacks that will attract international attention by directly targeting foreign civilians, while the PKK and its proxies are more interested in influencing the Turkish public’s perceptions by attacking military-security targets. Another important distinction has been the PKK’s use of female militants.

Recently, the PKK and its proxies have refrained from using car bombs in the clashes with security forces. In addition, following a PKK attack, those responsible usually reveal their identity within 24 hours, whereas IS takes much longer to claim responsibility for an attack and give details of the operation, suggesting that last night's attack was an IS operation.

Who were the perpetrators of the latest attack in Istanbul that coincided with the second anniversary of the declaration of the IS Caliphate on June 28, 2014? Two options are plausible. One is that the attackers were members of a special team sent directly from Raqqa in Syria. The other option is that the attackers were part of a semi-autonomous Turkish network linked to IS.

Security sources told Al-Monitor that at least two of the attackers were of Central Asian origin, most likely from Uzbekistan. This group's motive could have been to intimidate Ankara because of its Syrian policy choices and sharp U-turns in relations with Russia and Israel, sending Ankara the message: "Watch out. If you push us, you will pay a high price."

Over the past year, IS has carried out about 10 terror attacks in Turkey, and its first attacks against civilians — instead of specific opposition groups — took place in Suruc on July 20, 2015, and more than 100 people died in Ankara on Oct. 10, 2015. There seems to have been a major change in IS' strategy against Turkey.

It seems most likely that IS, which is under increasing pressure in Syria and Iraq, will shift its focus and actions to Turkey. When an attack is carried out by semi-autonomous networks that are not fully under the hierarchical command-control chain of IS, the decisions on the location, type and timing of the attack are delegated to the local network. This decentralization makes detection and prevention much more difficult for security forces.

Turkish security and intelligence bodies striving to cope with these serious developments will also be subject to public criticism, which may trigger even harsher countermeasures.